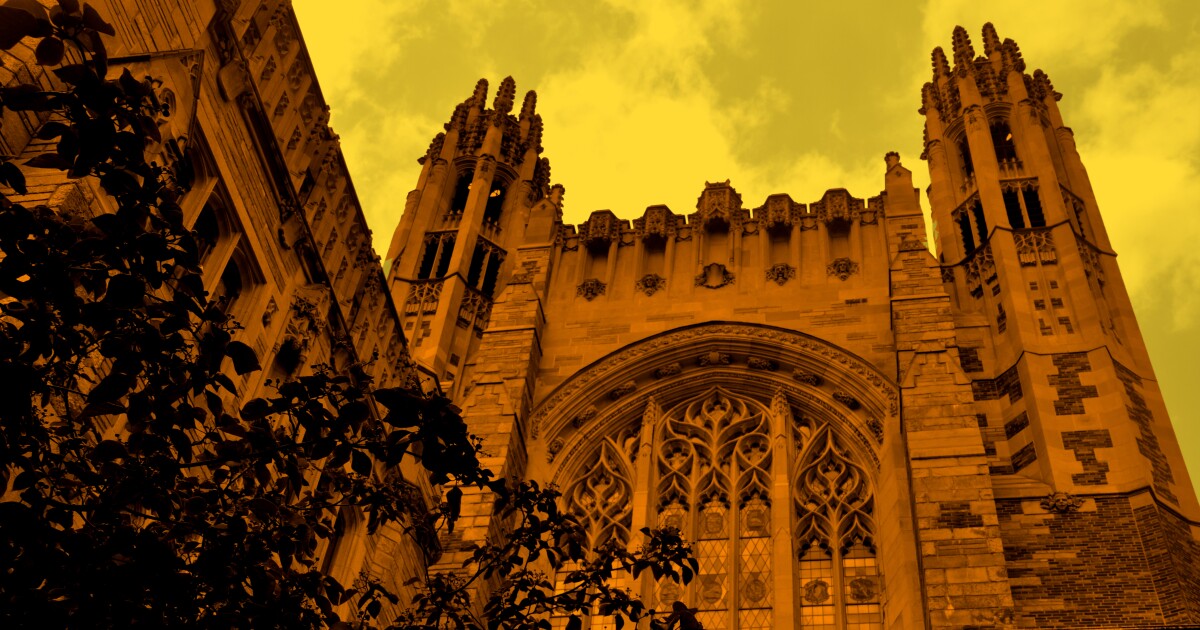 he movement for diversity and inclusion has improved people’s lives in many tangible ways. A few days ago at Northwestern’s Pritzker School of Law, where I’m a professor, I went into the men’s restroom and saw that the school had provided tampons and sanitary pads on a shelf there. It made me happy. There are people here who menstruate and identify as male. Their needs matter, and the school now recognizes that.

But in other respects, the diversity and inclusion movement is becoming the enemy of diversity and inclusion, imposing a cookie-cutter orthodoxy and trying to turn thinking human beings into marionettes. An already-notorious recent episode at Yale Law School (disclosure: I’m an alumnus) highlights the problem. It offers lessons in how to, and how not to, manage issues of inclusion.

Trent Colbert, a Yale Law student who belongs to the Native American Law Students Association (he’s part Cherokee) and the conservative Federalist Society, had invited classmates to an event cohosted by both groups. “We will be christening our very own (soon to be) world-renowned Nalsa Trap House … by throwing a Constitution Day Bash in collaboration with FedSoc,” he wrote. The invitation promised “Popeye’s chicken, basic-bitch-American-themed snacks (like apple pie, etc.)” and hard and soft drinks.

It is unsurprising that Colbert did not know all the connotations of “trap house.” The term, which originally referred to crack houses in poor neighborhoods, has, according to Urban Dictionary, “since been abused by high-school students who like to pretend they’re cool by drinking their mom’s beer together and saying they’re part of a ‘traphouse.’” It is one of a huge variety of slang terms from marginalized urban culture that have entered the mainstream, where many people acquire it ignorant of its etymology.

The invitation was almost instantly screenshotted and shared to an online forum for law students. The president of the Black Law Students Association reportedly wrote in the forum, “I guess celebrating whiteness wasn’t enough. Y’all had to upgrade to cosplay/black face.” She also objected to the mixer’s affiliation with the Federalist Society, which she said “has historically supported anti-Black rhetoric.” The school’s Office of Student Affairs received nine discrimination and harassment complaints.

A cookie-cutter orthodoxy is trying to turn thinking human beings into marionettes.

The office quickly summoned Colbert: “We’d like to meet with you to discuss a deeply concerning and problematic incident that was reported to us.” He was wary when he met with Ellen M. Cosgrove, associate dean, and Yaseen Eldik, diversity director, anticipating that some kind of punishment might be imposed upon him. So he recorded it. That recording, as Ruth Marcus, deputy editorial page editor, writes in The Washington Post, “offers an unsettling insight into the hair-trigger and reflexively liberal mind-set of the educational diversity complex.” But more than that, it is a lesson in how to do an important job badly.

In the first place, a coercive summons (which this obviously was) was inappropriate. Colbert’s email could not plausibly have been construed as discrimination or harassment, both of which require identifiable victims. Yale might have invited him to a meeting, but should have made clear at the outset that no sanctions were contemplated and that it was his choice whether to come at all.

The first few minutes aren’t all that bad. They sound like responsible administrators somewhat clumsily attempting to de-escalate a situation. Eldik explains to Colbert how the message was received by some other students: “In one paradigm you would think about the word ‘trap’ by way of the lens of a crack den or crack house. … The racial association with that connotation would be bound up in some of the drug use that has been historically associated with poor Black communities in this country.” That was useful information. Colbert told me that before this episode, he had thought it simply meant a “party house.” As the Above the Law’ founder David Lat observes, “an erudite, historically informed analysis arguing for why ‘trap house’ should be considered offensive” might be informative, but the fact that “a mini-dissertation” was necessary ought to tell us something about whether it was appropriate or not to take offense.

Some of Eldik’s claims were farfetched. The “triggering associations,” he told Colbert, were compounded “with the fried chicken reference,” which “is often used by the white majority … to undermine arguments that structural and systemic racism has contributed to health disparities in the U.S.” It is hard to imagine that anyone except Eldik made that connection. As it happens, there is a Popeyes restaurant near the law school. It can’t be racist to eat its food.

Then came this disastrous blunder: “The email’s association with FedSoc was very triggering for students that already feel like FedSoc belongs to political affiliations that are oppressive to certain communities through policies. … That of course obviously includes the LGBTQIA community and black communities and immigrant communities.” (The Federalist Society is one of America’s most influential legal groups, whose members include six U.S. Supreme Court justices.)

This may have truthfully reported how some students feel. But Eldik should have distanced the law school from those feelings.

The Washington Free Beacon, which first reported the story, claims that Yale’s leaders “now regard membership in mainstream conservative circles as a legitimate object of offense — and as potential grounds for discipline.” That’s an overreading — at this point in the conversation, there had been no mention of discipline — but Yale’s apparently uncritical endorsement of the complainants’ feelings was a mistake. The cause of diversity is not promoted when stupid stereotypes about Black people are replaced with stupid stereotypes about the Federalist Society.

Five minutes into the meeting, Colbert sounds relieved that no consequences have been threatened. He tells Eldik and Cosgrove that he knew that people had taken offense at his email, but that no one had explained to him what the problem was. “I think I’ll just not use that word anymore,” he says. “I’ve used it openly for months and no one’s said a thing, but I think it would have been better if someone had said something.”

Colbert told me later that he was concealing his nervousness. “It felt strange and uncomfortable. I was on edge because I wasn’t sure what was going on. I had the impression that these people weren’t trustworthy.” Associate Professor Monica C. Bell at Yale Law School has defended Eldik’s good faith, and I have no reason to doubt it. But the coercive character of the conversation destroyed the possibility of trust. Colbert had every reason to worry that he was in danger.

ldik and Cosgrove could have thanked Colbert for meeting with them, assured him that the claims of harassment and discrimination were without merit (which was obviously the case), and sent him on his way. They also might have advanced the mission of Yale Law by educating the complainants about what is and is not actionable harassment and discrimination: as future lawyers, they will do themselves no favors by bringing frivolous claims.

Instead, the conversation takes a threatening turn. Eldik truthfully suggests to Colbert that “you want this to go away.” Cosgrove warns that the matter “may escalate.” Eldik says, “I worry about this leaning over your reputation as a person. Not just here but when you leave. You know the legal community is a small one.”

As future lawyers, students do themselves no favors by bringing frivolous claims.

But the way to prevent the situation from escalating would have been to dismiss the complaints and take no further action. Within a few weeks, the episode would probably have been forgotten and you would not be reading this. In the immortal words of Allen Ginsberg, “it’s never too late” to “do nothing at all.”

The rest of the meeting is an extended effort to pressure Colbert to compose a written apology. Colbert is told to choose his own wording, but Eldik offers to help him, and in a later email suggests the most tired boilerplate imaginable: “I know I must learn more and grow. … And I will actively educate myself so I can do better.” It is all offered as friendly advice, but the asymmetry of power is clear. It is in fact terrible advice. A written confession of racism, which would of course instantly and permanently be accessible on the web, does not enhance one’s reputation.

When Colbert hadn’t apologized by that same evening, Eldik and Cosgrove emailed the entire second-year class about the incident. An “invitation was recently circulated containing pejorative and racist language,” the email read. “We condemn this in the strongest possible terms” and “are working on addressing this.” Here mediation has ceased. The law school has taken it upon itself to declare who is right and who is wrong. Colbert was publicly branded as “racist” before his peers. “They sent that out,” he told me, “while they were on the phone with me telling me that there’s no judgment here.”

In a brief follow-up meeting on September 17, which Colbert also recorded, Eldik says, “You’re a law student, and there’s a bar you have to take. So we think it’s really important to give you a 360 view.” This is more menacing than anything that was said the previous day. It suggests that this episode might be brought up to the character and fitness inquiry of a bar admission.

Colbert was now reasonably concerned about administrative consequences. He asked for clarification about Eldik’s reference to the bar. Eldik said he didn’t “foresee” that the matter would “connect with the bar just yet.” When pressed on what he meant by “just yet,” Eldik said that he didn’t know how the situation would “come from us to the bar” — implying that, if the advice to apologize were not taken, it would come from somewhere else.

t gets worse. On September 29, Colbert sent Cosgrove and Eldik an email asking whether the complainants had been told that he had not violated any bias policies, whether Yale might report the incident to the bar, and whether there was “any possibility that the administration will discipline me for the incident in any way (including mandatory bias training or anything like that)?”

For almost two weeks he got no answer. Cosgrove and Eldik finally met with him and confirmed that he would not be disciplined.

There is no excuse for the extended silence. Every day that Colbert was kept in doubt was a continuing harm that the law school had an obligation to remedy.

And I haven’t even mentioned the small matter of free speech. Even if the party invitation had been deliberately offensive, Yale’s own free speech rules should have protected it. Free speech means protection, not only from punishment, but also from official harassment for one’s speech.

This kind of repressive response happens a lot, and it unnecessarily gives the cause of diversity a bad name.

People come to the university with radically different narratives about themselves and the world. That generates some mighty intense disagreements. Members of a university need to work together peacefully even when they find one another’s deepest convictions wrong or offensive. It can be valuable to have someone in the administration that students can complain to, whose job it is to detect and de-escalate conflict. (It is obviously difficult for a student to approach a professor to complain about racial insensitivity.) What that administrator must be wary of doing is adopting one side’s narrative and imposing it on everyone. An explanation of why the “trap house” email offended some people was helpful. An official statement pronouncing it “racist” was destructive, as was the semi-official implication that the Federalist Society is oppressive.

When a university is operating properly, there must always be space for disagreements, even about one’s most profound attachments and values. Colbert told me that what he likes about Federalist Society meetings is the open, “judgment free” arguments. Articulating an ideal to which every university should aspire, he recalled a debate from the previous day: “It was vicious but cordial.”