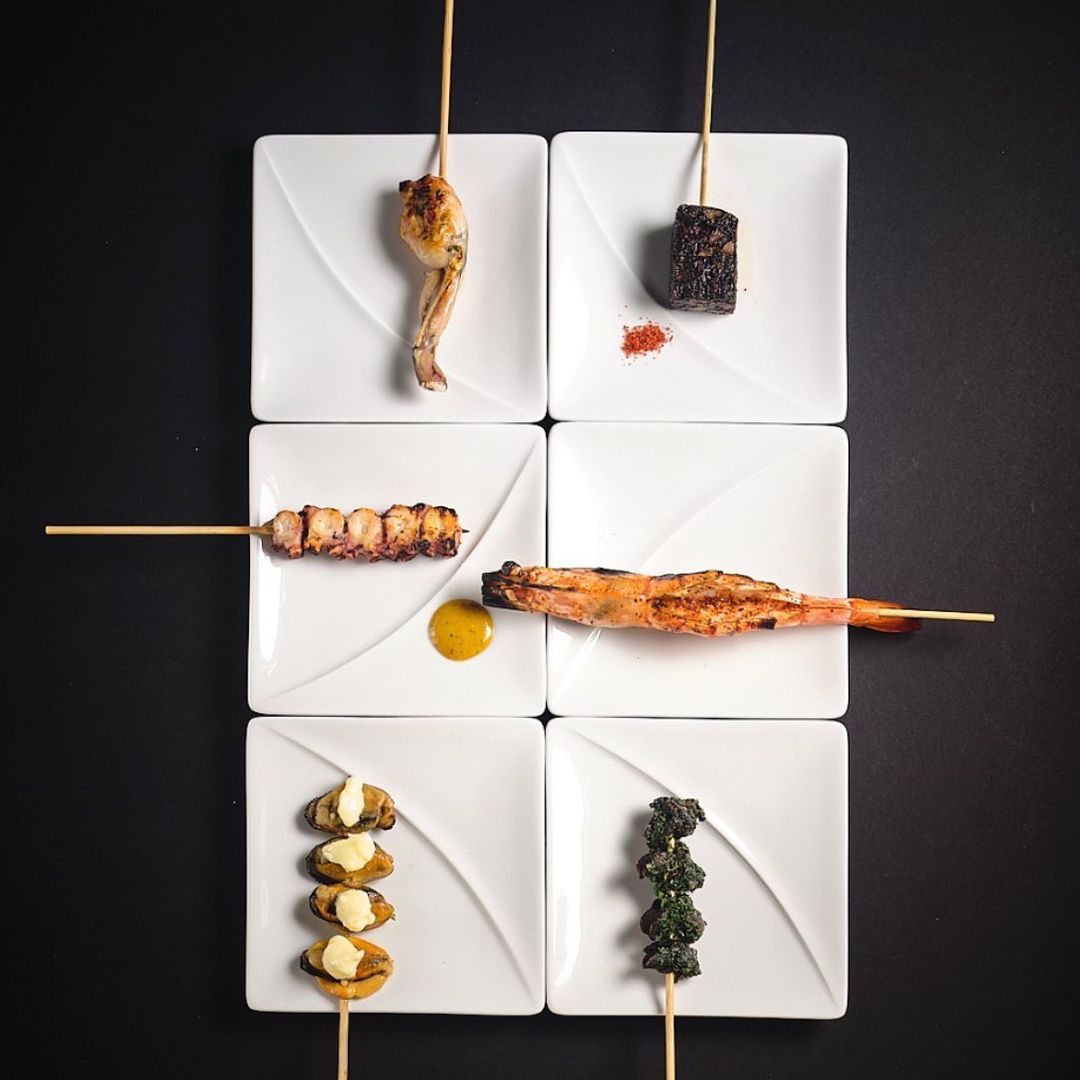 Pay no heed to current fifth-wave restrictions, confusing vaccine passports or the looming potential of a citywide lockdown. The wheels of the resilient Hong Kong F&B industry keep on turning, and as such, restaurants keep on opening. They keep thinking of very creative ideas, too. Here’s where to eat this March.

Stop all the panic buying and pay attention to the new restaurant openings this March instead. Relax! There’s enough to go around. But I can’t say the same for these new openings though, so I suggest you put down your supermarket shopping cart and pick up the phone to put in a booking before the rest of the city does. It’s something that sure beats stockpiling groceries.

And as always, if you do find yourself wandering out for a normal restaurant meal, remember to keep your hands squeaky clean and only invite one dining partner each time. Social distance, people!

All the new openings in Hong Kong this month:

If you you needed more reason to be excited over another French restaurant opening in the city, all you need to hear is this: It’s Olivier Elzer’s, of two-Michelin star L’Envol, very own concept, Clarence. And its not so much French fine-dine stringency either, but a casual experience that translates chef Elzer’s contemporary take on French cuisine into inventive concepts that are sure to become to classics. Led by protegé chef Simon So, Clarence is chef Elzer’s remaking of traditional French food, tinged with a little influence from his extensive culinary training — a spectacular 27 years with 23 stars — and tinted with Asian cooking methods, where he has called home for the last 13 years. Of course, at the core, Clarence is French through-and-through, where much of the time-honoured culinary heritage and traditions are still present within the menu.

Dishes are a variation of charcoal-grilled, steamed and grilled over teppan, as a bid to lighten the cuisine’s traditionally heavy flavours. It includes chef Elzer’s ideation of “Yakifrenchy”, a new patented concept of his own creation where classic French ingredients — frog legs, Ratatouille, Challans duck confit and snails burgundy — are skewered and finished over a Japanese robata grill. Elsewhere on the menu, are homey sharing plates — reflecting dining customs here in Hong Kong — of French-style dishes, including steamed French dover sole and skate wing on the bone, whole 1.2kg yellow chicken and Challans duck. And at the raw bar that mimics a Japanese sushi counter-like experience, a sea-fresh selection are prepared with a French twist and served with curated wine flights poured from the wine cellar nearby.

Following a colourful resume in high-end kitchens at reputable five-star hotels, including Hong Kong’s Mandarin Oriental, Macau’s Wynn and Ritz Carlton in Bahrain, Singapore and Hong Kong, chef Peter Find is chartering new culinary territories by starting his own venture. Heimat, translating to “homeland” in German, is Find’s refreshed take on modern German cuisine — a considerably rare find in Hong Kong — one, which he describes, is often misunderstood for being “too hearty and simple.” The menu at Heimat, then, takes on a refined approach to comfort flavours pulled from various regions in Germany and spotlights specialities from Berlin to Bavaria, along with those cherished dishes from chef Find’s childhood in his hometown of Bersrod.

Case in point: A Frankfurt signature green sauce is poured over upscale ingredients of poached Brittany lobster and 58-degree poached egg rather than its usual companions of potatoes and hard-boiled egg. There’s also the likes of a German pork dumpling, or Koenigsberger klops, served as part of the six-course tasting menu, that has been touted as a standout hit.

Heimat’s appreciation for an all-rounded German-ness doesn’t stop at the food, but continues through the beverages which see a stock-list of German gins (Boar Gin) and wines from German vineyards; the design and interiors, drawn up by JJ Acuna, which combine traditional German architecture with German-American architect Mies van der Rohe’s distinct minimalism. It even trickles down to the finest of details with the tableware all of German branding, including two-centuries-old glass manufacturer, Weck.

Chinese fine-dining in this city takes on many forms; many inspirations. At the newly opened Chinesology at Central’s ifc, the tradition-steeped cuisine is introduced in another contemporary concept by chef Saito Chau, a culinary vet with over 24 years of experience, counting stints at John Anthony, Dim Sum Library and Hutong. Chinesology pinpoints a specific moment in the Chinese culinary timeline: the Tang Dynasty, also known as the Golden Age of China, which was significant for its extensive progress in Chinese gastronomy.

Chef Chau’s Chinesology takes on a similar boundary-breaking, inventive approach to the Chinese dining experience — in presentation of the food; the concept; the experience; and the offerings. The menu, including a dedicated Chinese degustation experience, is a seasons-based curation with ingredients chosen according to the Chinese “five elements” cosmology. In sculptural-like show pieces, sample the likes of oolong tea and osmanthus tea-smoked chicken, preserved plum mousse, translucent lotus root and Yuhuan’s sweet and sour pork with rose spirit.

Completing the wellwellwell trio at Pacific Place, which initially opened with Chinese bistro Auntie ĀYI followed by cafe-bar TEAHOUSE/BARHOUSE, is Remedy Me, an Asian deli that represents the third “well” — water well (水井) — of the concept. As the “Water Well”, Remedy Me functions are a place for healing and nourishment, hence adapts to a Chinese medicine traditions with the menu of on-the-go soups and salad bowls.

Working with Wai Yuen Tong (位元堂), century-long traditional Chinese medicine (TCM) healthcare expert since the Qing Dynasty, who offers expert insight on nourishing TCM ingredients, Remedy Me creates a menu that offers a renewed take on traditional Chinese medicine and ingredients. Come for the Chinese soups and takeaway set inspired by TCM flavours, including Wholesome Cures, a take on city’s populist “Rice with Two Sides” order and features a changing menu that switches accordingly to the 24 seasons of the Chinese solar calendar. Or the Spring Heat Clearing and Detoxifying Set, created in collaboration with Wai Yuen Tong that serves a soup, three picks from the salad bar and a nata de coco herbal jelly.

What was the sleek interiors to modern British gastronomy on Gough Street is now the cozy new home of Chicano, a new Mexican cantina hinged on bringing comfort foods and a warm, hospitable ambience to the NoHo neighbourhood. Founders Gabe Perez and chef Edgar Vigo introduces a new facet to Mexican cuisine in Hong Kong, with a distinct LA-influence that’s inspired by Perez’s own upbringing in particular. Showcasing traditional recipes shared by Perez’s abuela, the nostalgic menu is filled with hearty sharing plates that is to be enjoyed like a convivial family meal at home. Try the birria served on fresh tortillas, snapper with pico de gallo salsa, Grandma’s Meatballs with Ancho sauce and Enchiladas de Pollo — we hear it’s can’t-be-missed favourite upon visit.

The Shady Acres team, also responsible for Honky Tonks Tavern, Quality Goods Club and more recently Juicy, have been real busy — despite what lockdown restrictions may say. They have another venture in the works; also in Kennedy Town, a very close neighbour to the newly opened juice bar: Mendel’s Delicatessen. An all-day cafe inspired by New York’s Jewish delis, they will be serving a lip-smackingly good selection of bodega sandwiches, coffees and bagels. To the New Yorkers here in HK, you’ve found yourself another spot for a well-made Reuben.

Swiss pastry chef Gèrard Dubois loves sourdough. And you would know because his latest bakery venture is named as such. Sour Dough, which as you probably can guess, serves a sweet and savoury world of sourdough creations — savoury sourdough French toast, croissants and raspberry rhubarb millefeuille — that have been made from sourdough starter which are 30 years old. But a place to go for well-proofed loaves not just so. Sour Dough is also a destination for a deli-style menu that covers vegan salads, soups and sandwiches. The tomato and olive sourdough focaccia with chicken tikka, greek yoghurt and apricot chutney is a delicious order, as is the chocolate sourdough with cranberries. Oh! The hot-pressed Cubano too — the choices are endless.

The sunny seaside community of Discovery Bay welcomes a new restaurant: Peony. As the only Chinese venue serving a refined menu of Cantonese favourites, Peony stands out amongst a crowd of laid-back all-day cafes and grab-and-go joints of the area and is set to bring a new tier of fine-ding experience to the neighbourhood. The team behind the menu of dim sum classics and familiar Cantonese serves is head chef Chu Ting-Kwok of T’ang Court and dim sum chef Tony Chan who counts experience at Duddell’s and Ying Jee Club. Come for the crispy roasted pork belly, named as a Peony specialty, chef Chu’s famous stir-fried lobster with spring onion and shallot and a beautiful array of dim sum including black truffle lobster dumplings.