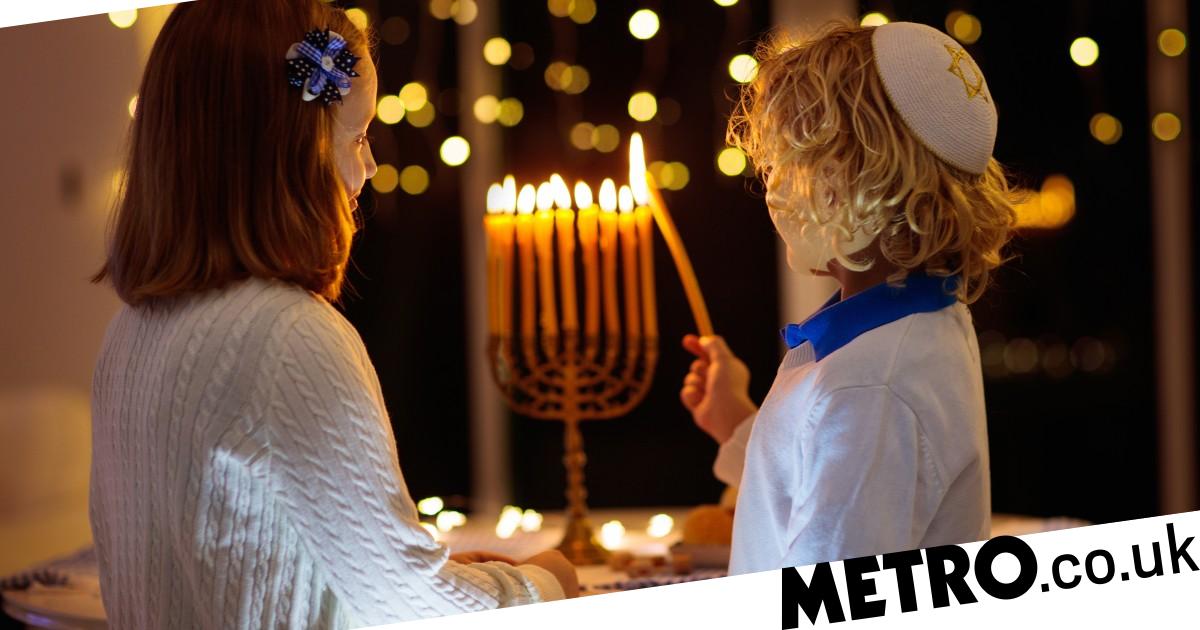 Jewish people across the world are gearing up for the festival of Hanukkah – complete with candle-lighting, doughnut-eating and plenty of celebrations.

The eight-day festival – known as the Festival of Lights – is one of the most celebratory times in the Jewish calendar, with families exchanging presents and lighting eight very special candles.

While Hanukkah can sometimes coincide with Christmas, it can fall at any time during the month of December – and sometimes even earlier than that.

Just when does the festival take place this year and what is Hanukkah all about?

Hanukkah 2021 begins at sundown today – Sunday, November 28 – which will be the 25th of the month of Kislev in the Hebrew calendar.

This date is different in the Gregorian calendar every year – as the Hebrew calendar is based on the lunar cycle rather than the solar cycle, with months beginning according to the new moon – which leads to the change in dates.

The first night of Hanukkah in 2020 was on Sunday December 22, meaning that the festival coincided with Christmas.

Like most Jewish festivals and significant days, Hanukkah will begin at sundown on the first night, lasting for eight nights until Monday December 6.

What is the festival of Hanukkah about?

Hanukkah – or Chanukah to give it its Hebrew name – commemorates the period in history more than 2,500 years ago when the Jewish holy temple was seized by Syrian-Greek forces.

Their king, Antiochus, gave the Jewish people an impossible choice – either renounce their religion or be sentenced to death.

That’s when a small group of Jewish rebels known as the Maccabees, fought back and were able to recapture the holy temple – but when they did they discovered that there was only enough oil left to keep the holy light (known in Hebrew as the Ner Tamid), a flame which is never meant to go out, for one more day.

However a miracle occurred – and the flame somehow stayed alight for eight more days, which was long enough for another batch of oil to be produced.

The eight candles which are lit on the eight days of the festival commemorate this.

What are the traditions of Hanukkah?

Unlike many of the major Jewish holidays, Hanukkah is not a festival which requires those celebrating to refrain from work or study – but it still has more than its fair share of traditions and customs throughout the week.

The Menorah has nine branches on it, with the middle candle known as the Shamash, which is used to light the other candles each night.

It’s traditional to place the candles in the window of each family’s home so that those passing by can see it.

Other customs include eating foods fried in oil – traditionally doughnuts and latkes (potato pancakes) – to celebrate the miracle with the oil in the temple.

Hanukkah is quite the celebratory festival too, with parties often held and gifts often given (some people have the custom of giving presents for every night of the festival) – while it’s also common to give children a small gift of money known as ‘Hanukkah gelt’, as well as chocolate coins.

And it’s also traditional to play games with a small spinning top known as a dreidel, which features Hebrew letters on each of its four sides.

Legend has it that they was used by Jewish children in the time of the Maccabees, to try and cover up the fact they were studying religious texts and make it appear that they were simply playing games instead.

What should you say to someone celebrating Hanukkah?

If you want to give festive greetings to Jewish friends or colleagues you can simply wish them a ‘happy Hanukkah’ or ‘Hanukkah Sameach’ which is Hebrew for ‘happy Hanukkah’.

Alternatively you can say ‘Chag Sameach’ (a traditional greeting used on festivals which simply means ‘happy holiday’) or you can go one better and wish them a ‘Chag Urim Sameach’ or ‘happy Festival of Lights’.


MORE : How do you wish someone a happy Hanukkah in Hebrew?