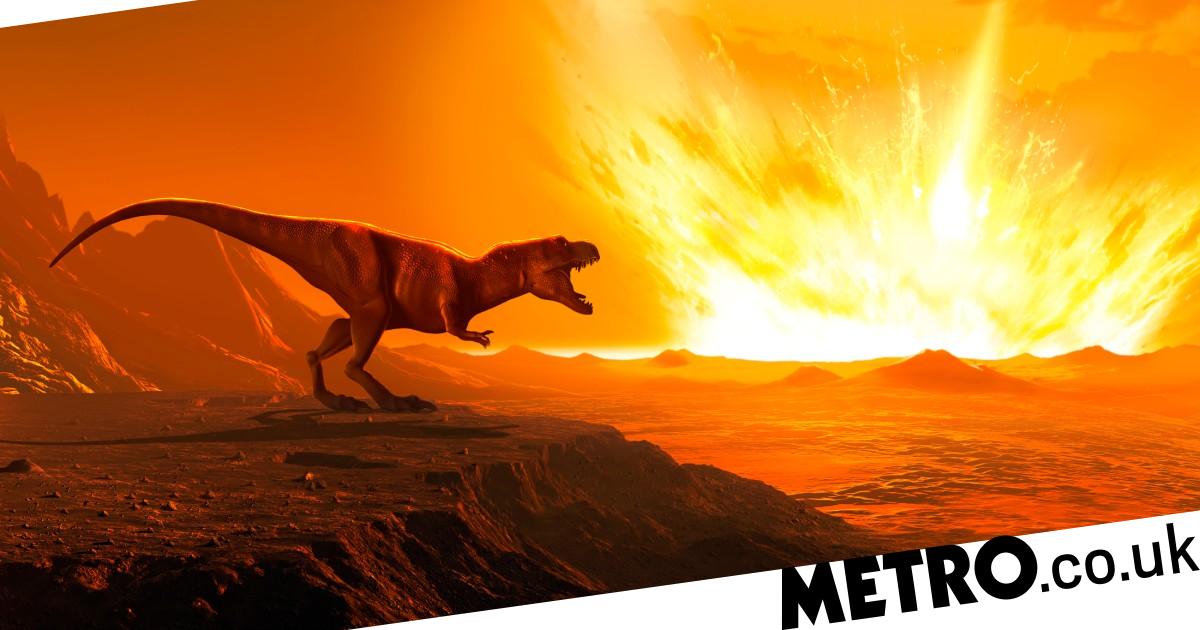 Although there are millions of years between us as a species, we will never stop being fascinated by dinosaurs

From blockbuster franchises to toys, video games and now a brand new David Attenborough documentary, our interest in the prehistoric world shows no signs of waning.

With this in mind, let us take a trip back millions of years to when dinosaurs ruled the Earth, to explore some facts about their fate, and discover who was the biggest among our favourite monstrous lizards…

When did dinosaurs go extinct?

The dinosaurs went extinct 66 million years ago, over a relatively short period of time

Many other animals also died out, including pterosaurs, large marine reptiles, and ammonites.

The mass extinction event took place at the end of the Cretaceous period, wiping dinosaurs off the face of the planet after dominating for over 165 million years.

In fact, the only ‘dinosaurs’ to survive the event were birds.

To put that into perspective, our ancestors have been around for about six million years, with the modern form of humans having only evolved about 200,000 years ago – a tiny fragment of the time dinosaurs were on Earth.

Why did dinosaurs become extinct?

While many dinosaur species are believed to have been in decline towards the end of the Cretaceous period, the most popular theory suggests an asteroid is to blame for their extinction.

The Alvarez hypothesis – named after father-and-son scientists Luis and Walter Alvarez who proposed it in 1980 – suggests that a meteor the size of a mountain slammed into Earth 66 million years ago, filling the atmosphere with gas, dust, and debris that dramatically changed the environment, thus driving the dinosaurs to extinction.

The crater of the devastating asteroid is believed to be located along the coast of Mexico’s Yucatán Peninsula. At about 93 miles wide, the Chicxulub crater is believed to be the right size and age to fit the bill as the landing site for the catastrophic space rock.

In 2019, a study led by The University of Texas at Austin analysed rocks that filled the gigantic impact crater left by the asteroid, which caused an explosion equivalent to 10 billion of the nuclear bombs which destroyed Hiroshima in World War II.

Sean Gulick, a research professor at the Institute for Geophysics within the Jackson School of Geosciences, said: ‘It’s an expanded record of events that we were able to recover from within ground zero.

‘It tells us about impact processes from an eyewitness location.’

While the dinosaurs wouldn’t have all been wiped out at once, the asteroid caused instant destruction, setting light to trees and plants thousands of miles away, as well as triggering a massive tsunami.

Gulick described the cataclysm as ‘a short-lived inferno at the regional level, followed by a long period of global cooling.’

Another theory published in the journal Geology in 2018 believes that volcanic activity had already begun to wipe the dinosaurs out before the doomsday meteorite crashed to the surface.

The study adds to arguments that volcanic eruptions coupled with the asteroid were simply too much for the dinosaurs to bare.

Many believe the volcanic activity weakened the climate so much that the asteroid acted as a killing blow, bringing an end to the Tyrannosaurus Rex and the rest of his cretaceous buddies.

Was the T-Rex the biggest dinosaur?

While the Tyrannosaurus rex – better known as the T-Rex – may be one of the most popular dinosaurs, it was not the biggest.

The biggest dinosaur believed to have ever lived was the Argentinosaurus, a herbivore that lived in the Cretaceous period.

It is estimated to have weighed up to 100 tons and measured somewhere between 30-40 metres in length, a whopping 130 feet – which also makes it the largest animal to have ever walked the Earth.

While hardly a slouch itself, the T-Rex – which measured around 15.7m (over 51 feet long) – wasn’t even the largest carnivore.

That honour belongs to the Spinosaurus, which is estimated to have been 18m -almost 60 feet – long.

Dinosaurs: The Final Day with David Attenborough airs on BBC One on April 15 at 6.30pm.


MORE : Mammals put brawns over brains to survive after meteor wiped out the dinosaurs


MORE : Spear-boned beast, thought to be one of the earliest dinosaurs, unearthed in China