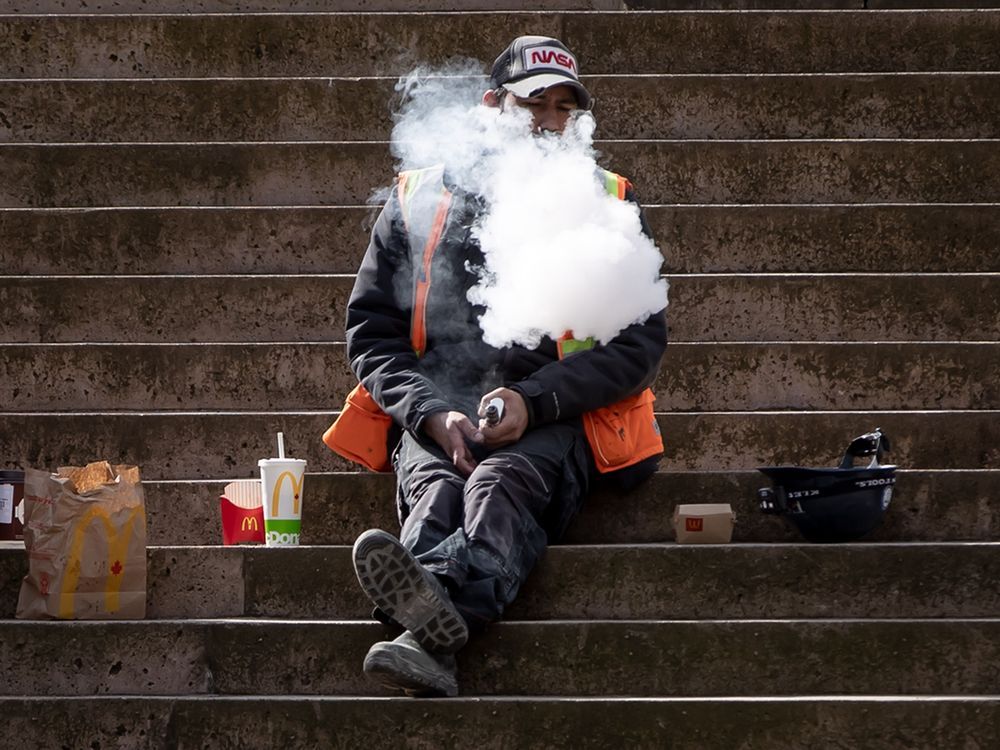 In The News is a roundup of stories from The Canadian Press designed to kickstart your day. Here is what’s on the radar of our editors for the morning of May 17 …

What we are watching in Canada …

Advocates on both sides of the vaping debate say the government’s clampdown on youth vaping is raising questions about how it plans to meet its tobacco reduction targets.

The government is in the midst of reviewing the 2018 bill that legalized vaping for the first time, and appears to be veering away from the narrow path between treating vapes as a harm reduction tool — or a danger in and of themselves.

The harms of vaping relative to smoking tobacco cigarettes are still something of a mystery, but the government’s website suggests it’s safer than inhaling cigarette smoke.

Physicians for a Smoke-Free Canada executive director Cynthia Callard says the government seemed in favour of encouraging people to switch from smoking to vaping, but now seems to have moved away from that strategy.

The percentage of youth who say they use vapes more than doubled between 2017 and 2020. Fourteen per cent of people between 15 and 19 reported vaping in the last month of 2020.

The government has introduced several regulations in response, and has asked for feedback about whether more powers are needed to clamp down as part of its review.

Maria Papaioannoy with Rights4Vapers says the approach is at odds with the government’s harm reduction approach to drug use, and punishes people who want a healthier alternative to tobacco cigarettes.

Prince Charles and his wife, Camilla, are in Newfoundland and Labrador’s capital today to begin a three-day Canadian tour focused on Indigenous reconciliation and climate change.

The royal couple will visit the provincial legislature where they will be welcomed by Prime Minister Justin Trudeau before heading to Government House, which is the official residence of Lt.-Gov. Judy Foote, the Queen’s representative in the province.

There they will take part in a reconciliation prayer with Indigenous leaders at the Heart Garden, which was built to honour Indigenous children who attended the province’s residential schools.

Leaders from four of five Indigenous groups in the province will be there. Johannes Lampe, president of Labrador’s Inuit Nunatsiavut government, will instead be attending a swearing-in ceremony for his newly elected members.

Charles and Camilla will then tour Quidi Vidi, a former fishing community in the east end of St. John’s, before heading to Ottawa and, finally, to the Northwest Territories.

England first established a colony in Newfoundland in 1610, and the island remained under British rule until it joined Canada in 1949 along with Labrador and became the province of Newfoundland, with a constitutional amendment in 2001 giving the province its current name.

Prior to welcoming the royal couple, Trudeau and Premier Andrew Furey will visit a local childcare facility.

A new survey suggests that more than half of Canadians under age 35 come across racist or prejudiced remarks about immigrants on the internet.

Forty-two per cent of respondents of all ages reported seeing or hearing racist content about immigrants in cyberspace.

Jack Jedwab is president of the Association for Canadian Studies, which conducted the online poll with Leger.

He says it’s not surprising that younger people are more likely to see this content, because they’re more active and engaged on social media.

But he says the degree of exposure to racist content should be cause for concern — especially in light of the mass shooting in the United States over the weekend.

The white gunman is accused of massacring 10 Black people in a racist attack at a Buffalo, New York, supermarket. Police say he claimed to have been radicalized online.

What we are watching in the U.S. …

LAGUNA WOODS, Calif. — A gunman motivated by hatred against Taiwan chained shut the doors of a California church and hid firebombs before shooting at a gathering of mostly elderly Taiwanese parishioners, killing a man who tackled him, authorities said.

David Chou, 68, of Las Vegas — a U.S. citizen whom authorities say grew up in Taiwan — drove to Orange County on Saturday and the next day attended a lunch held by Irvine Taiwanese Presbyterian Church, which worships at Geneva Presbyterian Church in the community of Laguna Woods. Though he knew no one there, he spent about an hour mingling with about 40 attendees and then executed his plot, authorities said at a news conference.

He chained the doors and put super glue in the keyholes. He had two 9 mm handguns — legally purchased years ago in Las Vegas — and three bags, containing among other things four Molotov-cocktail-type incendiary devices and extra ammunition. He opened fire and in the ensuing chaos Dr. John Cheng, 52, tackled him, allowing other parishioners to subdue him and tie him up with extension cords.

Cheng died and five people were wounded, the oldest 92. Sheriff Don Barnes called Cheng’s heroism “a meeting of good versus evil” that probably saved the lives “of upwards of dozens of people.”

Chou was booked on suspicion of murder and attempted murder and jailed on $1 million bail. He was expected to appear in state court Tuesday. It was not immediately clear whether he had an attorney who could speak on his behalf. A federal hate crimes investigation is also ongoing.

Chou had worked as a security guard in Las Vegas, authorities said.

There was no immediate word on why Chou chose to target the church in Laguna Woods, a scenic coastal area whose population mainly consists of retirees and is near a large gated community.

Barnes said the motive for the shooting was Chou’s hatred toward Taiwan that was documented in handwritten notes that authorities found. Chou’s family apparently was among many forcibly removed from mainland China to Taiwan sometime after 1948, Orange County District Attorney Todd Spitzer said.

Relations between mainlanders forced to flee a Communist takeover and native Taiwanese were frequently tense as the new arrivals crowded into slums and military communities. Separated by language and lifestyle, bullying and confrontation were frequent as President Chiang Kai-shek tightly restricted civil liberties under nearly four decades of martial law.

What we are watching in the rest of the world …

KYIV, Ukraine — Efforts were underway Tuesday to rescue the last of the defenders inside the Azovstal steel plant in the ruined city of Mariupol after Ukrainian officials said the fighters had “completed their mission” and there was no way to free the plant by military means.

The Ukrainian military avoided using the term “surrender” to describe the effort to pull out of the steel plant to save as many lives as possible. Officials planned to keep trying to save an unknown number of fighters who stayed behind. It was unclear if soldiers evacuated to Russian-controlled areas would be considered prisoners of war.

Ukraine’s deputy defence minister said more than 260 fighters, including some badly wounded, were evacuated from the plant Monday and taken to areas under Russia’s control.

“The work to bring the guys home continues, and it requires delicacy and time,” said Ukrainian President Volodymyr Zelenskyy.

He said the evacuation to separatist-controlled territory was done to save the fighters who endured weeks of Russian assaults in the maze of underground passages below the plant.

“Ukraine needs Ukrainian heroes to be alive. It’s our principle,” he said.

Russian forces were pounding targets in the industrial heartland of eastern Ukraine known as the Donbas, and the death toll kept climbing with the war set to enter its 12th week.

Ukraine made a symbolic gain when its forces reportedly pushed Russian troops back to the Russian border in the Kharkiv region. Video showed Ukrainian soldiers carrying a post that resembled a Ukrainian blue-and-yellow-striped border marker and then posing next to it. The Ukrainian border service said the video showing the soldiers was from the border “in the Kharkiv region,” but would not elaborate, citing security reasons. It was not immediately possible to verify the exact location.

David Milgaard accepted a $10 million compensation package from the Saskatchewan government for his wrongful conviction in the 1969 murder of a Saskatoon nursing aide. Milgaard, who spent more than two decades in prison, received the largest criminal compensation package in Canadian history.

In addition to $50,000, the honour nets the Vancouver photographer a solo exhibition at the Scotiabank Contact Photography Festival in May 2023 and a published book of her work, to be distributed worldwide.

Runners-up Shannon Bool of Comox, B.C. and Barbara Astman of Toronto each receive $10,000.

The annual Scotiabank Photography Award recognizes mid-to-late career artists and was co-founded by Scotiabank and Canadian photographer Edward Burtynsky in 2010.

Yoon is also a visual art professor at Simon Fraser University and has had more than 200 solo and group exhibitions around the world.

Her work is in 17 public collections, including the National Gallery of Canada, Royal Ontario Museum, Vancouver Art Gallery and Seoul Museum of Art.

Did you see this?

OTTAWA — Foreign Affairs Minister Melanie Joly is condemning as appalling images of Israeli police pushing and hitting mourners at the funeral of an Al Jazeera journalist who was shot while working in the West Bank.

Joly says the behaviour by Israeli police, some of whom arrived on horseback, against mourners and family members of Shireen Abu Akleh, a veteran Palestinian-American journalist, was completely unacceptable.

She says a light needs to be shone on the killing of the journalist, who was shot while covering an Israeli military raid in the West Bank city of Jenin last week, as well as on actions at her funeral.

Witnesses say she was killed by army fire, while the military says it remains unclear who shot the bullet that killed her.

Israeli police with batons were filmed charging mourners and pallbearers, at one point almost causing the casket to be dropped.

In a statement Saturday, Israeli police said their commissioner had launched an investigation into policing at the funeral, claiming rioters tried to sabotage the procession and harm officers.

NDP foreign affairs critic Heather McPherson says Israeli police conduct at the funeral was abhorrent and she has called for an independent international investigation into the journalist’s death.

This report by The Canadian Press was first published May 17, 2022