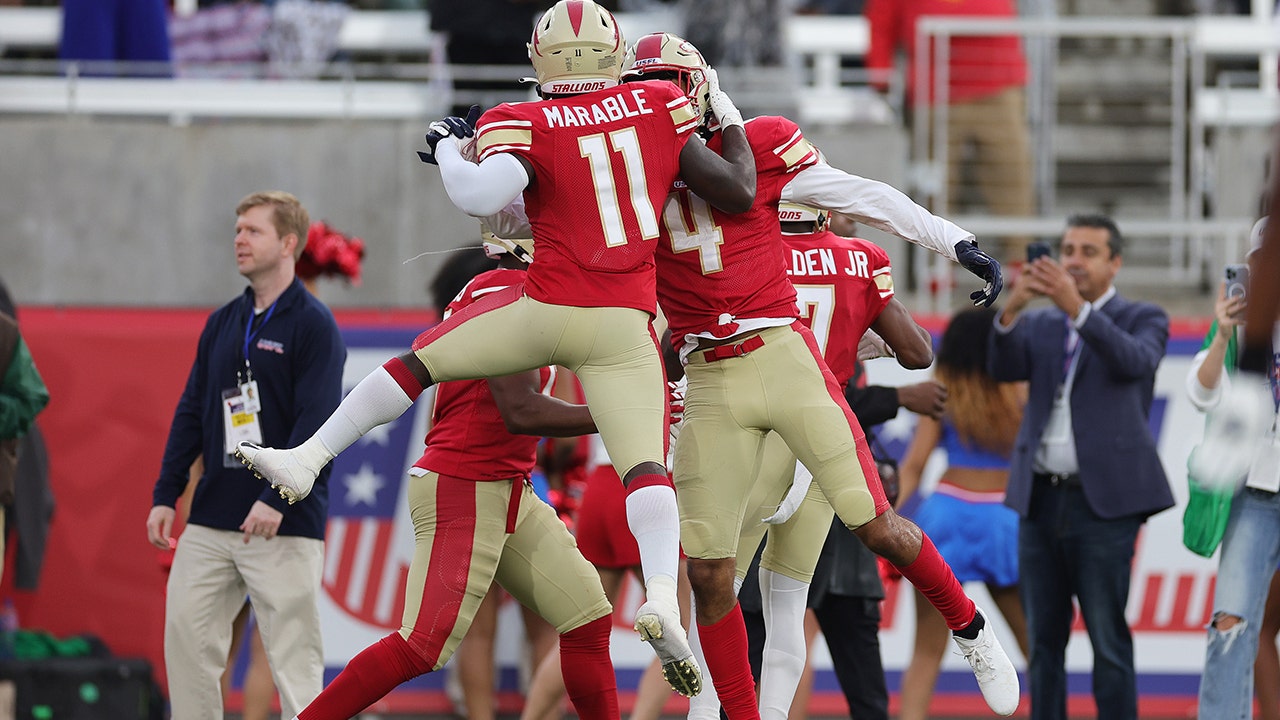 The New Jersey Generals and Birmingham Stallions played a thriller in the first game of the United States Football League on Saturday night.

Stallions quarterback J’Mar Smith needed to dig deep to help Birmingham pick up the victory, After having been thrust into the game because of Alex McDough’s injury, Smith helped the Stallions big on the final drive.

He led the team on a nine-play, 50-yard drive for a touchdown with 23 seconds left. Smith scored on a 2-yard rush and celebrated with his teammates in the end zone. The Generals’ last-second heave didn’t get them into the end zone.

J’Mar Smith #6 of Birmingham Stallions looks to pass the ball in the second quarter of the game against the New Jersey Generals at Protective Stadium on April 16, 2022 in Birmingham, Alabama.
(Carmen Mandato/USFL/Getty Images)

Generals kicker Nick Rose hit a 47-yard field goal to take the lead with 1:54 left in the game. Rose missed two field goals before the clutch kick. But it was Smith who had final say in the game.

Osirus Mitchell #4 of Birmingham Stallions celebrates his touchdown with teammate CJ Marable #11 in the first quarter of the game against the New Jersey Generals at Protective Stadium on April 16, 2022 in Birmingham, Alabama.
(Carmen Mandato/USFL/Getty Images)

He finished 11-for-21 with 156 passing yards and a touchdown. He added 13 yards on the ground on three carries. McGough started the game at quarterback but went down with an injury. He was 5-for-10 with 55 passing yards.

Stallions running back C.J. Marable had 22 yards on seven carries. Tony Brooks-James led the team with 27 rushing yards on eight carries. Osiris Mitchell had the first touchdown catch in Stallions history. He made a one-handed snag in the first quarter to get on the board. He had five catches for 96 yards.

Generals quarterback Luis Perez hooked up with Randy Satterfield for the first touchdown pass in USFL history. It came on the first drive of the game.

Scooby Wright III #33 of Birmingham Stallions knocks the ball from the hands of Luis Perez #2 of New Jersey Generals in the second quarter of the game at Protective Stadium on April 16, 2022 in Birmingham, Alabama.
(Rob Carr/USFL/Getty Images)

Perez found Satterfield in the back of the end zone and the wide receiver was hit by Stallions defensive back Tae Hayes. Perez had two touchdown passes in the game. The other one went to Braedon Bowan.

Perez finished 13-for-18 with 143 passing yards and the two scores. De’Andre Johnson also played in the game as the rushing quarterback threat. He led the way with 98 rushing yards. At one point, the Generals had run 25 consecutive rushing players.

On the defensive side, Shalom Luani had the first interception in USFL history. He also had eight tackles and impressed USFL fans with huge hit.

The Generals and Stallions played in the first game in USFL history.

There will be three games taking place on Sunday.

The Houston Gamblers play the Michigan Panthers at noon ET on NBC and Peacock. The Philadelphia Stars face off against the New Orleans Breakers at 4 p.m. ET on USA. And the Tampa Bay Bandits and Pittsburgh Maulers will end the first week with a matchup on FS1 at 8 p.m. ET.

Each game will take place at Protective Stadium in Birmingham, Ala.