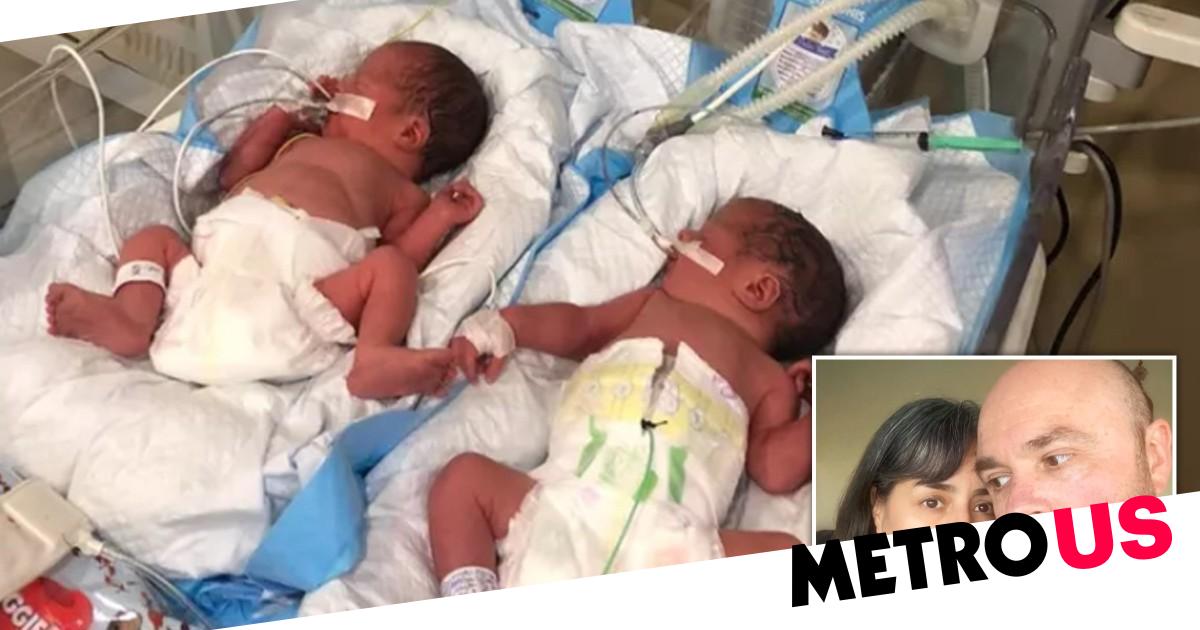 A couple whose twins were born prematurely in Kyiv via a surrogate on Friday are desperately seeking help and a way to rescue them as Ukraine continues under invasion by Russia.

Irma Nuñez, 48, and Sasha Spektor, 46, were born two months early at 32-and-a-half weeks at Adonis maternity hospital after a ‘complicated’ pregnancy. Lenny and Moishe Spektor, weighing four pounds each, face health complications including trouble breathing as warfare outside the hospital threatens their safety.

The American parents from Georgia are looking for a hospital with an underground bomb shelter. They are also searching for a way to get their children and the surrogate out of Ukraine when it is safe to do so.

‘They came into the world two months early, at the end of a complicated pregnancy and the beginning of a war,’ a friend of the parents wrote on a GoFundMe page created over the weekend.

‘Lenny and Moishe are healthy (and hairy!) but need additional medical care before they are strong enough to travel to the United States.’

The page states that the parents are heading for Warsaw, Poland, where they plan to coordinate medical transport for their boys out of Kyiv and Ukraine. They also hope to rescue the surrogate and her six-year-old son and possibly two other newborns.

Spektor said the twins’ early arrival has made rescuing them all the more difficult.

‘The fact that they’re premature plays against us,’ he told Today on Tuesday. ‘They need to stay put. We need to take them out.’

Spektor detailed the challenged he faced in finding special milk for premature babies amid the crisis.

‘I talked to this pharmacy in the morning,’ he said. ‘By afternoon, when one of our contacts got there, it was already shelled and it was closed.’

Spektor has even called on President Joe Biden for help.

‘Just get our babies out,’ he said. ‘If that’s not possible, at least to Lviv, somewhere westward (in Ukraine), where they would be safe.’

The GoFundMe page had raised more than $71,000 as of Wednesday night.

US-based surrogacy provider Adonis Fertility International said that close to 100 American and Canadian clients have been impacted by Russia’s war on Ukraine.