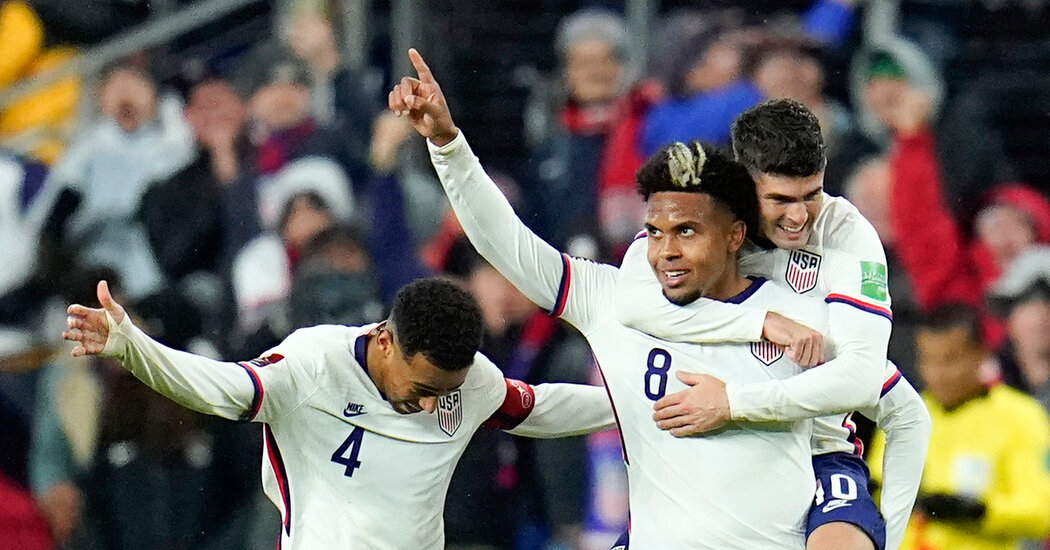 CINCINNATI — Michael Jackson’s 1988 song “Man in the Mirror” — a classic tune, but no one’s idea of a rousing sports arena jam — was blaring over the stadium speakers late on Friday night as the U.S. men’s soccer team rollicked and embraced happily on the field.

A bit less than half an hour earlier, Christian Pulisic had charged toward the sideline to celebrate the first of the Americans’ goals in their 2-0 victory against Mexico, lifting the front of his No. 10 jersey to reveal the same phrase, “Man in the Mirror,” scrawled in permanent marker on his white undershirt.

At that moment, even reasonably well-informed American soccer fans might have been left scratching their heads at the references, struggling to understand what, exactly, was afoot.

Welcome to the ferociously competitive, wonderfully petty and endlessly amusing rabbit hole of a rivalry between the soccer teams of the United States and Mexico.

The feuding neighbors’ World Cup qualifying match on Friday night — an important one, with three points and first place in the group standings up for grabs — had all the hallmarks of a classic: two scintillating goals, two physical altercations, one red card and multiple instances of borderline inscrutable taunting wrapped inside layers of allusion.

To understand the Michael Jackson song and the homemade shirt and the Americans’ generally self-satisfied air after the game, one must go back to Tuesday, when Guillermo Ochoa, Mexico’s goalkeeper, suggested in an interview that the United States looked in the mirror and hoped to see Mexico, seemingly implying that the Americans’ wanted to mold themselves as a team in their rivals’ image.

On the Richter scale of sports trash talk, the comments barely registered. But the young American team, which has had mixed success in building an identity through the first half of the 14-game qualifying tournament for the 2022 World Cup, seemed happy to run with them anyway, to use them as extra fuel.

First came an unprompted response from Berhalter in his news conference the day before the game. He quipped that the Americans’ two wins over Mexico earlier this year had not done enough to win Mexico’s respect. His team would have to do more on Friday, he said. (The American fans had their say, too, booing Ochoa every time he touched the ball on Friday night.)

Then came the players’ response on the field. The teams battled through a nervy first half, with goalkeeper Zack Steffen making two athletic saves to keep the Americans even. Then everything — the teams’ attacks, the players’ emotions — bubbled over in the second.

In the latter of two on-field kerfuffles in the game, Mexico defender Luis Rodriguez menacingly grabbed wing Brendan Aaronson’s face from behind, prompting a long, ugly sequence of arguing among players from both teams. As the teams pushed and shoved, and as three yellow cards were shown, Pulisic was preparing to enter the field as a substitute. When he did, the rough gave way to the sublime.

In the 74th minute, forward Timothy Weah received the ball on the right wing and calculated a sequence of dribbles down the edge of the penalty area, measuring out a pocket of space. Upon creating it, he thwacked an inch-perfect cross toward the mouth of the goal, where Pulisic flew in to head it past Ochoa to give the United States a 1-0 lead.

It was Pulisic’s first touch of the ball in a competitive match for the United States since September, when he sustained a high ankle sprain during a qualifier in Honduras. As the sellout crowd of 26,000 roared, Pulisic paused to display his “Man in the Mirror” shirt before being mobbed by his teammates.

Afterward, he sheepishly batted aside questions about his shirt, framing the episode as a little joke.

“I think you guys know the message,” he said. “I don’t need to speak on it too much. It’s not a big thing.”

Weah was much happier to elucidate. The night before the game, he said, he and defender DeAndre Yedlin asked one of the team’s staff members to draw the shirt for Pulisic to wear during the match.

He painted the prank as a matter of pride.

“Before the game Mexico was talking a lot of smack, and beating them shuts them up,” Weah said. “We have to continue to win games and continue to beat them, and that’s the only way we’re going to earn their respect.”

After Pulisic’s goal, the Americans pressed for a second. When Weston McKennie delivered it in the 85th minute he prompted chants of “Dos a Cero!” — a reference to a famously recurring score line between the teams — from the stands.

And after the final whistle, the team’s staff conspired to play “Man in the Mirror” over the loudspeakers to accompany the team’s postgame celebrations as a final, cheeky send-off.

It was a comprehensive win for the Americans, who outshot Mexico by 18-8, and it pulled the United States into a tie on points with their archrival at the top of the standings with seven matches to go. The top three finishers in the group qualify automatically for the World Cup next year in Qatar.

But more than the points, the young and inexperienced American players may cull more intangible benefits from the experience: a petty slight, a few impish inside jokes, a night of joy and perceived revenge — sports teams have bonded together over far less.

“We talked about how we thought they didn’t think they gave us enough respect, and we had to go out and earn it,” Berhalter said. “And I think we went out and earned it today.”