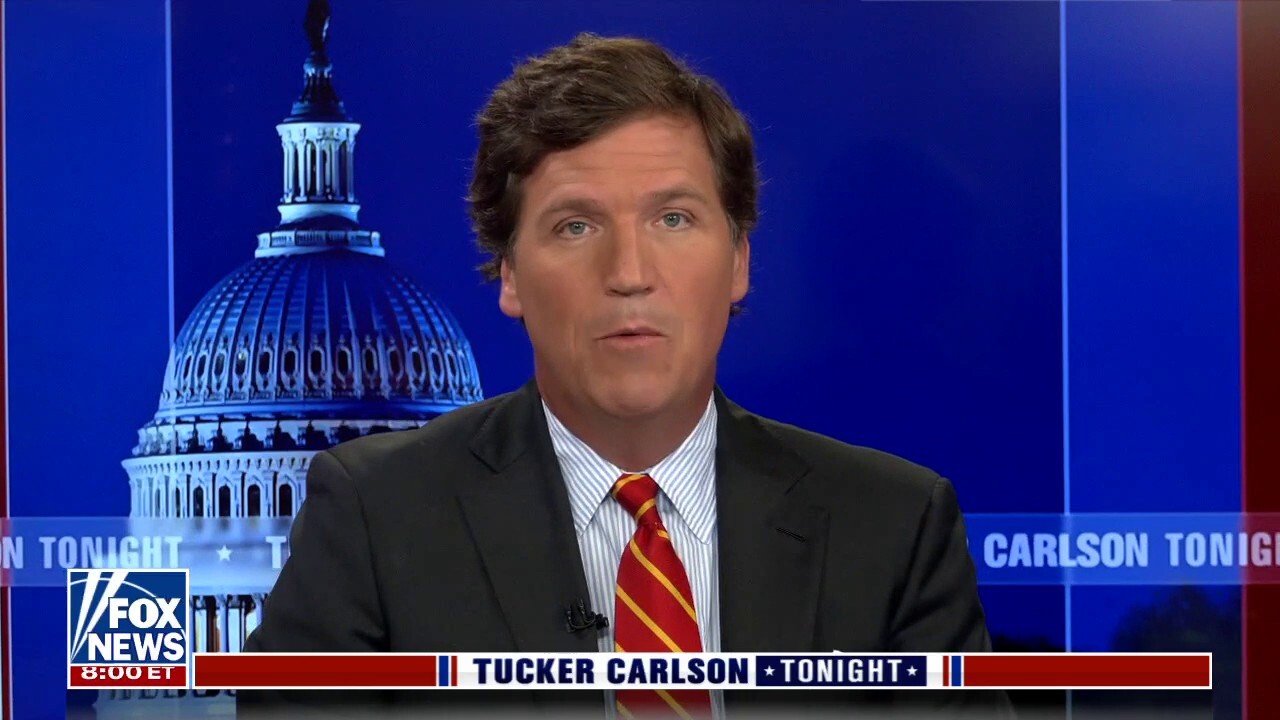 What exactly is democracy? Well, pluralism is the hallmark of it. In a democracy, citizens can have any opinion they want to have. They can express any opinion they want in public whenever they care to express it, including through mass media. If citizens are dissatisfied with their political leadership, they can challenge their leaders for office. Now, all of these things are true in every free country, in any period, always.

These are not just features of democracy. These are prerequisites for democracy. So, with that in mind, you should know about a political party in Ukraine called Opposition Platform for Life. With 43 seats in parliament, it is the largest opposition party in that country. Over the weekend, the president of Ukraine, Volodymyr Zelenskyy, banned that party. Opposition Platform for Life is now prohibited from “all activity within Ukraine.”

In this image from video provided by the House Television, Ukrainian President Volodymyr Zelenskyy speaks from Kyiv, Ukraine, as he addresses virtually addresses Congress on Wednesday, March 16, 2022.
(House Television via AP)

So, with a single command, Zelenskyy made it impossible for anybody to run against him for president. He did this not just to Opposition Platform for Life, but to ten other political parties that he believed were insufficiently loyal to him. They’re all illegal now. Obviously, there’s a war underway in Ukraine, and on that basis, Zelenskyy has declared martial law, but we must tell you, there is no evidence that the opposition parties he banned were aiding Russia in its war against Ukraine.

Opposition Platform for Life, for example, denounced the Russian invasion the moment it happened, just like everybody else. But Zelenskyy took the opportunity to turn Ukraine into effectively a one-party state, which it now is. So having banned all opposition, he then seized control of the country’s media outlets. Zelenskyy signed a decree that combines all national television channels into a single platform that he controls. He described this as a “unified information policy,” and it certainly is unified.

So, if all of these details seem shocking to you, if this is not the Zelenskyy you’ve heard about on the Today Show, then you may not have been paying attention to Ukraine. Zelenskyy has been solidifying complete control over Ukraine for a long time, since long before the Russian invasion and the war. Last year, he had his main political opponent arrested and his assets seized by the state. At the same time, Zelenskyy shut down three of Ukraine’s most popular television networks—channels that, not coincidentally, had criticized him.

So, how should we as Americans assess this? Well, first and most obviously, by admitting this is authoritarianism, it’s not democracy. Then second, by acknowledging that actually it’s pretty common around the world. Even in 2022, real democracy is a rare thing anywhere. Most countries are still governed by some variety of dictatorship, whatever they may call it, and that includes close American allies. The kingdoms of Jordan and Saudi Arabia come to mind, but there are others. We’re not moralizing about this, by the way. Obviously, we’d prefer democracy everywhere in every country, but as Americans, it’s probably a waste of time to get too involved in the internal affairs of other countries. They’re hard to change.

So that’s the first thing we do if we want to inspire and change the world, Ukraine included, is make sure that we stay free. And with that concern in mind, you should be very worried by your leader’s response to what’s happening in Ukraine, the growing dictatorship there, and that’s the word for it. What’s another word for it? If you have ideas, send it to us.

On the very same day that Zelenskyy shut down opposition media and all opposition political parties, professional liar and Atlantic Magazine pundit David Frum posted this on Twitter verbatim: “Ukraine may be the first example in human history of a country that, under the pressure of war, is becoming ‘more’ tolerant and ‘more’ liberal.”

Right, so when you outlaw all criticism of yourself, that’s called tolerance. It’s called democracy. Don’t take the word of a single Canadian warmonger, propagandist. David Frum is hardly alone in telling you that. All of Washington is telling you that. Watch.

JOHN BARRASSO: So proud of President Zelenskyy and the courage that he has shown and in Congress, we are trying to get the administration on board.

DICK DURBIN: He, of course, by his example, shows the kind of courage we all hope we can reach and provide at a moment of real testing.

BEN SASSE: Government doesn’t give us our rights. Our rights come to us from God and government is just a shared tool to secure them and you see that spirit, that American Philadelphia 1787 spirit in Zelenskyy right now.

INSIDE THE BRUTAL, TERRIFYING RUSSIAN SIEGE OF MARIUPOL

Ukrainian President Volodymyr Zelenskyy attends a joint press conference with his counterparts from Lithuania and Poland following their talks in Kyiv on Feb. 23, 2022.
(SERGEI SUPINSKY/AFP via Getty Images)

These people. So, the man who just declared himself king is actually the world’s newest George Washington. OK, so you could be deeply concerned and deeply saddened, outraged by what’s happening to Ukrainians without saying things like that, because it’s absurd. It’s a lie. That’s the word from Sen. Ben Sasse of Nebraska, a Republican. And again, on one level, you can understand why people are whipped into an emotional frenzy when they talk about Ukraine. Why wouldn’t they be? Russia’s invasion of Ukraine was shocking. It was wrong. The suffering of civilians there is entirely real. We’re watching it on TV. It’s horrifying.

So, it’s entirely natural to root for the Ukrainians to expel the invaders, and obviously we are rooting for them to expel the invaders, Russia. But just because what Russia has done in Ukraine was wrong doesn’t mean you have to lie about the Ukrainian government. In fact, if you really cared about the Ukrainian people and all the people you saw on TV,—”we care so much”—you wouldn’t want them to live under a dictator, so you’d be highly upset about what Zelenskyy just did, but our leaders are not upset in the slightest. They’re cheering it on even when they know better. So, some of it is too dumb to know, but some of them do know.

Michael McFaul, for example. He’s Barack Obama’s ambassador to Russia. Unlike shallow gasbags like Dick Durbin or Ben Sasse, McFaul actually understands Eastern Europe. He has lived there. He knows exactly who Zelenskyy is and exactly what he’s doing. So, here’s his assessment of the Ukrainian government, not the people, the government, as of this afternoon. “If Zelenskyy remains in power, Ukrainian democracy is preserved.”

That guy teaches at Stanford. But that’s not true. So again, Ukraine was invaded by its neighbors, and we oppose that, we should oppose that, but that doesn’t mean Ukraine is a democracy. It’s not and we shouldn’t tell Americans it is because that’s a lie. We should tell the truth, but virtually no one is telling the truth. Everyone is lying.

So why? Why is everyone lying? Why not just say, “Look, it’s outrageous that Russia did this and….we like Ukraine better. We’re going to support Ukraine.” Fine. Why go the extra step to tell us that Ukraine is a model democracy when it’s not at all? Why are they doing that? Maybe because Ukraine now has exactly the sort of democracy they’d like to see here in the United States. They hate to think that could be true. It’s scary to think that’s true, but ask yourself. Play this word game. If they can find a “national security pretext” for a war, for example, do you think Adam Schiff and Kamala Harris or Mitch McConnell would pause for even a second before banning their political opponents for running for office in this country? Do you think they would hesitate before pulling this show off the air forever? No, of course not. They’d do it in a flash. Then they call it democracy.

So, maybe you’re starting to conclude these people love Zelenskyy, not because he represents the Ukrainian people, but because Zelenskyy is exactly the leader they would like to be with wildly expanded war powers to make everyone who complains shut up at gunpoint. Maybe that’s what’s going on. It seems kind of obvious when you think about it. Now, of course, we pray they never have the power to do any of that in this country, the last free country in the world. We should not let them do that because freedom in America is not just important to us, our children and grandchildren. It’s important to the globe. Again, we are the last free country. We must remain free.

In the meantime, a war is being waged in America’s name with our money, so it’s fair to ask how the side we are backing is doing. Clearly, there are an awful lot of heroic Ukrainian citizens. We see them all the time on television. We applaud them. We admire them, but how is the government doing? How is it behaving? Again, we have a right to know, even if state-controlled media in Ukraine won’t report it, even if our sort of state-controlled media here downplays it, dismisses it. Here’s a man called Gennadiy Druzenko. Druzenko was a medic in charge of a field hospital in Ukraine. He’s appeared on CNN. Here, he casually announces that he has ordered the castration of captured Russian soldiers. Watch.

GENNADIY DRUZENKO: I have instructed my doctors. I have always been a great humanist and said that as soon as a person is wounded, he is no longer an enemy, but a patient. But now, a very strict instruction is to castrate all men because they are cockroaches, not people.

Cockroaches, not people. Now again, that doesn’t mean the broader Ukrainian cause is unjust. It is just. They were invaded. They have a right to fight back and expel the Russians from their country and for the fifth time, we’re rooting for that. But we’re paying for this. So, we have a right to know exactly what’s happening. We have an absolute right to know. In fact, we have a constitutional right to free media. We don’t have that. That video, by the way, disappeared. People on the internet managed to get a copy of it. You may hear it dismissed as Russian propaganda, just like Hunter Biden’s laptop was or the 2016 presidential election results in this country were, but it’s not Russian propaganda. It’s real.

The man you just saw speaking has confirmed the video is authentic. He apologized for it. So murdering POWs is a war crime, so is castrating them. We’re not shocked by this. This happens that a lot of countries. Ukraine is not unique. Atrocities happen during war, every war, always, no matter what the neo cons may tell you, but this is a war that we are paying for.

This is a war with moral implications. This is a war the White House is involved in at every level. So, when the Ukrainian government does something, we have an interest in knowing exactly what it is and what it means, but more than anything, we have an overriding interest and a moral obligation to keep the United States free. So, when you see them admire someone who’s shutting down any opposition to him, you should pause.

This article is adapted from Tucker Carlson’s opening commentary on the March 21, 2022 edition of “Tucker Carlson Tonight.”