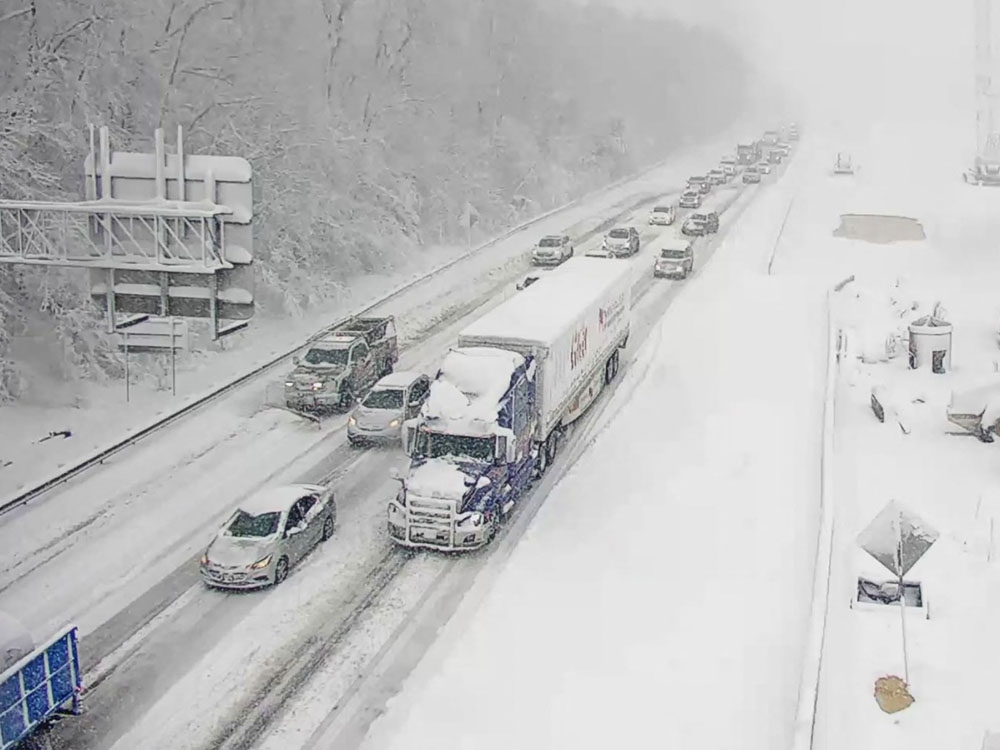 WASHINGTON — Thousands of people were trapped in their vehicles for hours along a nearly 50-mile (80-km) stretch of Interstate 95 in Virginia after a storm dumped up to a foot (30 cm) of snow, forcing the highway to close, officials said on Tuesday.

I-95, a major north-south thoroughfare on the East Coast, was closed in both directions near Fredricksburg, about 55 miles (89 km) south of Washington, the Virginia Department of Transportation said.

The National Weather Service forecast more winter weather for the Middle Atlantic region starting on Wednesday and another storm on Thursday.

Traffic on the 47-mile stretch of the highway came to a standstill about 8 p.m. on Monday and was still not moving late on Tuesday morning.

Tractor-trailer trucks and cars snaked along the snow-clogged roadway for miles. Desperate motorists trapped for hours in freezing weather, some of them without food or water and with their vehicles running out of fuel, flooded social media.

“Good morning from I-95 in Virginia where I have been trapped in my car for more than 20 hours,” Jim DeFede, a reporter with CBS 4 Miami, tweeted just after dawn. “I’m not sure but I think I now qualify for Virginia residency.”

He said he was stuck in Prince George County until early afternoon before fire and rescue teams guided his car and other vehicles in reverse to a just-opened exit.

Aerial video from Washington television station WRC showed hundreds of cars and trucks jammed on one side while most lanes of I-95 were closed to regular traffic and snow plows cleared the road.

State and local emergency personnel worked through the morning and into the afternoon to clear downed trees, assist disabled vehicles and reroute drivers, Governor Ralph Northam said on Tuesday.

“It’s going to take some time to get to these folks. We’re trying to get water, trying to get to warming stations for them, so we’re doing everything we can to keep people safe and to get these roads cleared,” he said during a telephone briefing.

My team has been working throughout the night alongside @VSPPIO, @VaDOT, and @VDEM to respond to the situation on I-95.

Northam said he hoped to reopen the highway on Tuesday but “we kind of take it one step at a time.” He promised to provide frequent updates.

Northam and the Virginia Department of Transportation came under fierce criticism for the state’s response and failure to call in the National Guard. Some urged President Joe Biden to mobilize federal resources to rescue stranded drivers and reopen the highway.

“This is insane. Nothing is being done, 911 isn’t much help, neither is Virginia state police. And the state has yet to contact National Guard. Insane,” wrote one Twitter user who claimed to have been stuck on I-95 south for hours.

Northam told WTOP radio the National Guard was available, but said it had yet to be mobilized.

The U.S. Department of Transportation posted a Twitter message saying it was ready to help the state reopen the highway and assist motorists.

Volunteers were doing what they could to help.

“Reply with need AND MILE MARKER and we’ll try to connect you to other drivers in your area who might be able to share some supplies with you,” tweeted Reagan Battalion, a conservative political organization.

In another volunteer effort, someone passed out Schmidt Old Tyme bread after the company agreed to open one of its trucks stranded on the interstate, a local CBS reporter caught in the standstill said.

Among those stranded was U.S. Senator Tim Kaine of Virginia, who spent the night on I-95 trapped in his car on his way to Washington.

“I started my normal 2 hour drive to DC at 1pm yesterday. 19 hours later, I’m still not near the Capitol,” Kaine tweeted early on Tuesday along with a photo from his car sandwiched between trucks.

The heavy snow, which fell in parts of the Southeast and mid-Atlantic states, triggered crashes and spin-outs on I-95, paralyzing that section of the highway. The standstill persisted as temperatures dropped below freezing overnight.

The fast-moving storm forced the closure of federal offices and schools, grounded airplanes and knocked out electrical power for thousands of people.