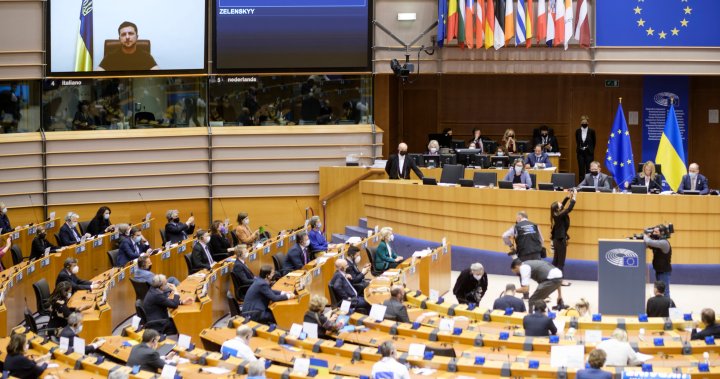 Ukrainian President Volodymyr Zelenskyy’s speech in front of the parliament of the European Union Tuesday was so stirring that it caused the official translator to choke up with emotion.

In footage from Euronews, the unnamed English language interpreter can be heard becoming emotional as he repeats Zelenskyy’s promise that the people of Ukraine would not be broken by the Russian invasion.

“We are fighting just for our land. And for our freedom, despite the fact that all of the cities of our country are now blocked,” Zelenskyy said, as the narrator held back tears.

“Nobody is going to enter and intervene with the freedom of our country.”

Listen: The official Ukrainian translator for the European Parliament appears to hold back tears as President Volodymyr Zelenskyy delivers a speech on the Russian invasion to MEPs. 🇪🇺🇺🇦

“Every square of today, no matter what it’s called, is going to be called Freedom Square, in every city of our country. Nobody is gonna break us,” Zelenskyy continued.

It’s not the first time this week the president has caused an interpreter to become emotional.

In a separate speech on Sunday, a translator working for a German news agency also broke down during one of his speeches.

“Sorry,” she quietly said in German, before going off the air.

The attacks come after Zelenskyy’s address, which urged the European Union to “prove that you are with us” as his nation’s fight against Russia continues.

In the emergency session of parliament, Zelenskyy appeared by video conference to push for EU membership a day after officially requesting to join the bloc.