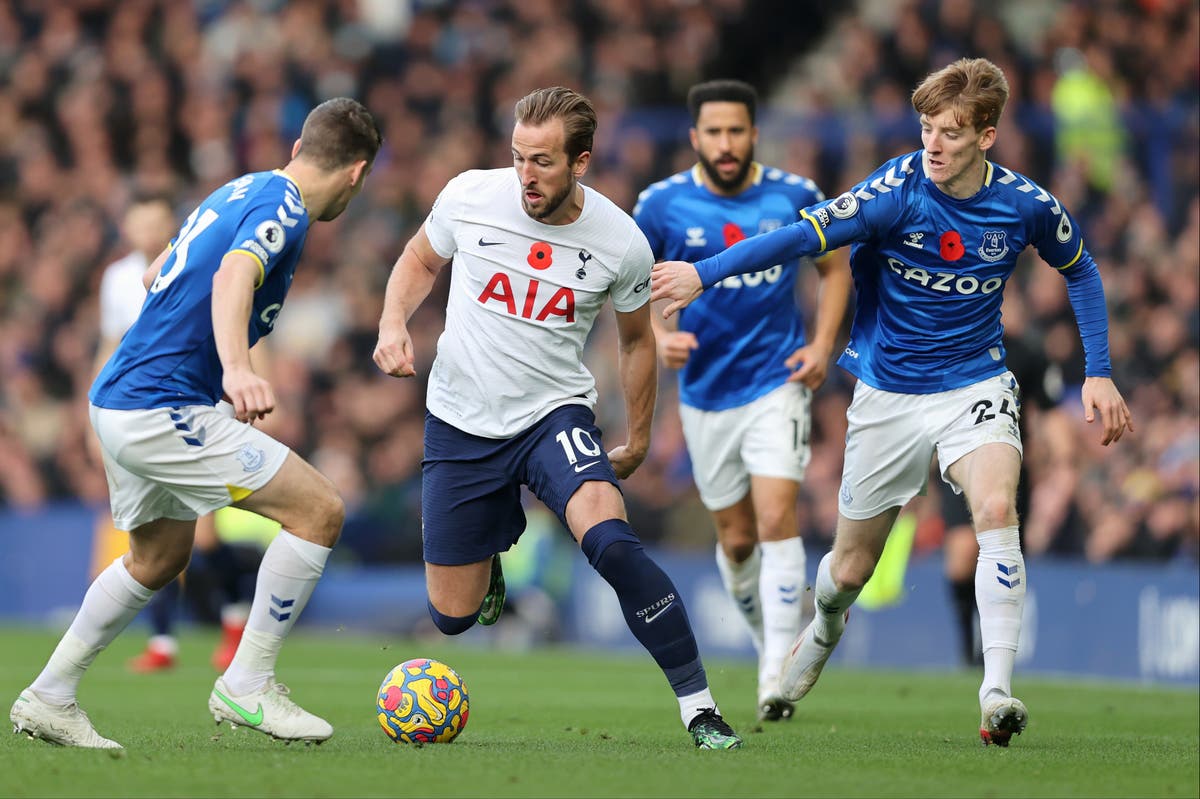 ottenham were held to an uneventful 0-0 draw by Everton in Antonio Conte’s first League game in charge.

In a throwback to Nuno Espirito Santo’s dour reign, Spurs failed to register a shot on target at Goodison Park, although substitute Giovani Lo Celso came closest to a breakthrough when he struck the post in the last few minutes.

Earlier in the second half, referee Chris Kavanagh awarded Everton a penalty for a Hugo Lloris foul on Richarlison but overturned the decision after checking his pitch-side monitor on advice from the VAR. Replays showed the Spurs goalkeeper got a touch on the ball.

Mason Holgate was sent off for a rash lunge on Pierre-Emile Hojbjerg in stoppage-time.

Dan Kilpatrick was at Goodison Park to rate the Tottenham players…

Did not have a serious save to make. Did well to touch the ball in challenging Richarlison for overturned penalty incident.

A calmer outing after his red card on Thursday. Used the ball well and mainly looked comfortable at the back.

Coped well with Richarlison, aside for one moment in the second half when the Brazilian escaped behind.

Won most of his duels, including some important challenges and got forward intelligently.

Solid at both ends of the pitch and got into some great positions. But with so much emphasis on the wing-back in Conte’s system, he may not have the pace to be really effective.

Combative at the base of midfield, frequently winning the ball, but his passing was often loose, particularly with more adventurous balls forward.

Covered ground, combative and kept it simple in possession. Him and Hojbjerg lack creativity as a pair, though.

Final ball was missing, leading to some good positions wasted, and squandered the best chance of the first half when he stretched to turn over Kane’s cross. Picked up an early booking for a professional foul on Andros Townsend.

Guilty of losing possession too often, either with loose passes or by running into opponents. Might’ve been hooked sooner.

Often crowded out and struggled to get in positions to run at goal. When he did get behind Everton’s back line, he shanked his shot wide (admittedly from an offside position).

Another clunky performance, including more than one misplaced pass from an encouraging position. His goal threat consisted of two blocked shots. Conte’s appointment has not magicked him back to form.

Spurs effectively switched to a back five after he came on and filled in on the left of defence.

Came closest to a goal with a fine curling effort which struck the post.

His introduction felt too late in the day as Spurs struggled for creativity.