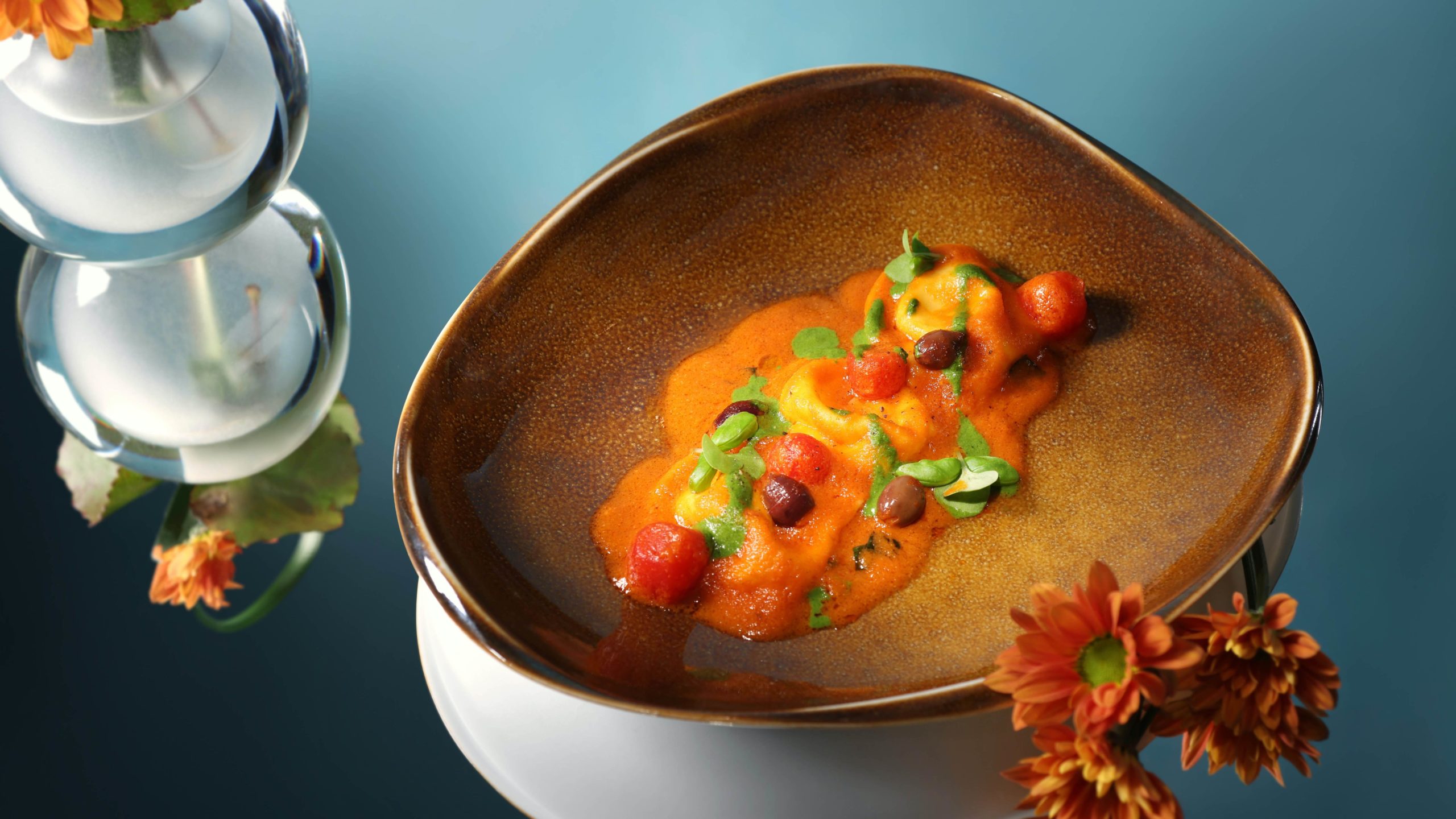 The Home Chef is a series that uncovers closely guarded recipes of the city’s most notable chefs, so that you, amateur home-cook, can, too, recreate restaurant-grade meals in the comforts of your own kitchen. Makeshift tea-towel aprons at the ready. A dear friend (or furry pup!) appointed as designated taste-tester. Served with a sweet chef’s kiss, naturally. Bon appétit!

I arrive in the glittering Ritz-Carlton airspace, 102 stories into the clouds, at Tosca di Angelo. Within the five minutes I spend admiring the sweeping panoramic views and being cheerfully greeted by chef Angelo Agliano, I am suddenly presented with a steaming bowl of picture-perfect pressed dumplings: his buffalo cheese ravioli. “You have to taste it,” he encourages. “Or you won’t know.”

Chef Angelo is all about the experience. The process; the journey. Each meticulous step of trying, testing and testing again –– the result of an extensive culinary training which took him from his Sicilian seaside home on a journey though Europe –– France, Spain, Switzerland –– and then Asia; Hong Kong, specifically in 2009. Born into a family of mariners, his arrival at the Ritz-Carlton Hong Kong, just a stone’s throw away from the ocean, is nowhere near the sparkling Mediterranean waters where he grew up. But it’s enough to satiate his salt-laced bones.

“I grew up in Sicily by the sea. My family are fishermen so I don’t have a choice but to love the ocean. I need the ocean. The sea and the salt –– it’s all part of my DNA,” he begins.

Then, he counts his prolific experiences around the world: A time in Royal Monceau Hotel’s Il Carpaccio in Paris, the first Italian restaurant in France to be awarded a Michelin star back in 2003. A time teaching Mediterranean cuisine –– the only Italian there doing so –– in a reputed culinary school at Lausanne. Then, perhaps his most notable –– and Chef Angelo says this with a proud smile –– a time with the culinary world’s greatest, Joël Robuchon, whose disciplines has paved the path for his own principles, both inside and outside of the kitchen.

Break for a brief recount of Chef Angelo’s beginning with Robuchon –– it’s a good one. A chance opportunity at 26 arose to cook at Robuchon’s 60th birthday; he presented a simple risotto. It was a highlight of the night; the best dish of the evening. “Everyone was [giving me a] standing ovation,” he recalls. “It was amazing, I’ll never forget it.”

The winning risotto? A creamy mixture of red onions, blueberry sauce and Taleggio cheese fondue. He joined the L’Atelier franchise where he stayed for a decade, going so far as to head openings in Taipei and Hong Kong. He left at 36 to open his own restaurant in Happy Valley –– the same age Robuchon was when he started his first, too.

It’s clear that Chef Angelo’s time with Robuchon was immensely impactful, a teaching point of countless valuable lessons: Don’t be too sensitive. Don’t compare. And always take the chance to learn each and every skill and technique.

He references a time in Monte Carlo, where he was appointed to lead the opening of Robuchon’s first Japanese restaurant. “In the beginning, I actually didn’t want to do it. But Mr Robuchon was very angry about this and said, “First you shut up and do what I want, and second, you will tell me thank you.” And he did. For a year, Chef Angelo mirrored the movements of a Japanese master and in turn learned the valuable nuance of Japanese cuisine; the refined touches and minute attention to detail. It was worth it.

“The Japanese technique for preparation is one of the top of the world,” he explains.

There are many moments like this that Chef Angelo credits for how he cooks today: Friends turned colleagues. Mentors turned guests. I ask for specifics, but he simply waves his hand to say, “Everyone. Every step [of my experiences] has opened my mind. Today, my philosophy is ‘360 degrees,’” he says. “Thank you to all my experiences.”

Experience is what led him to the point he’s at today. Still, he likes to remind me that he’s always improving. As for what continues to help his dishes improve, he nods towards his team –– his family –– which has stayed with him for the last three years.

“I have a fantastic –– from my career until today –– [it is] the best team. Really, really, really,” he smiles.

Second, he credits the community and their criticism. It’s not about fitting to a preconceived framework. “This is ‘Angelo Cuisine’. Angelo Restaurant,” he says. “I don’t want to say ‘Italian Restaurant’, it is too limiting.” He chooses to stun in plating and pairing interesting ingredients rather than fluff and hiding behind the term –– and he frowns –– innovation. He reaffirms, “I’m old-school, and I am proud to be old school. To be old school is to [know] the true cuisine.”

Cooking from the Heart

Somewhere between recounting his journey thus far and stressing the important of cooking with sincerity –– with authenticity –– there’s a risotto dish Chef Angelo brings up. It sounds delicious. It is the amalgamation of five different teachings, from the way you add the cream before the cheese and after, or the way you manipulate the heat. “The most important ingredient for any single dish I do is not products from Italy, France or Spain –– it’s from myself. It’s my heart,” he explains. “First, you have to understand, all my dishes are made with 25% of my heart.”

He then jokes, “If not, I will switch jobs tomorrow.”

Now, this ravioli. As Chef Angelo mentioned, Tosca di Angelo presents “basic Italian cuisine”. No fancy frills of excess. And here, pasta is a classic. An essential. He doesn’t mean it in the way you want to dig into a huge bowl after a long day with extra shaving of cheese –– though, yes, you should. But also fundamentally, in the wider scope of Italian cuisine. In the way a fish or meat dish usually concludes a French menu, the pasta or risotto does for Italian. Sometimes there’s both, if the menu is long. But there are rules: Never a double. Otherwise chef Angelo says, “Too heavy. Too much carbs.”

“This dish comes back to a [traditional] Italian cuisine. It’s typical stuff –– a pasta from Italy. For sure, it must be on the menu.” he says, “Doesn’t matter, there has to be one homemade pasta you have to have.”

So along with this ravioli, there are five to six different edition of pasta inspired by various things: one by Sicily, another Sardinia. One with egg, one without. Even one inspired by women in Toscana. They’re well-thought-out serves that add to the underlying essence of Chef Angelo’s ideation of an authentic Italian meal. Hearty, comforting and so very familiar.

To those making this ravioli at home, make sure you are kneading skill are up to par, is Chef Angelo’s first piece of advice. “There’s no recipe,” chef warns, “The more you work the pasta, the more elasticity it has. But you must feel it. You must know. You must feel it when the pasta says to you “Stop, I am ready.” His second, work at your own pace.

Then, the stuffing, which also has its particulars: The careful blend –– a third of a portion for each –– between buffalo mozzarella from Napoli, burrata from Puglia and smoked stracciatella is a considered one, to ensure a creamy centre perfects a photogenic pull. Chef Angelo also adds that the mix should be frozen a day ahead –– a skill he’s carried on from his previous Japanese teaching –– to make sure every portion is uniformed, “I can do mamma-style, one big and one small, but for me, technique is my estro (creativity),” he says.

He continues to share, in animated gestures, the cutting, folding and squeezing of the ravioli (make sure there are no air bubbles trapped within!), each step as important than the next. These are memory-led, well-rehearsed steps for chef, who tells me he’s been making these with his family since he was four. “We always used to do it together. Every Sunday, we would gather. Three or four families to prepare the dishes. The dough, the flour –– it brings me [back to] 40 years ago,” he reminisces.

Look, just make a booking for dinner. Trust me. You’ll probably catch Chef Angelo at your next visit; he is there every day of the week from Tuesday to Sunday. “Except Monday,” he laughs. “Fortunately, we are closed on Monday.” So, should you do see him, ask about his story of the best pizza in Hong Kong.

For the pasta dough:

For the tomato coulis: