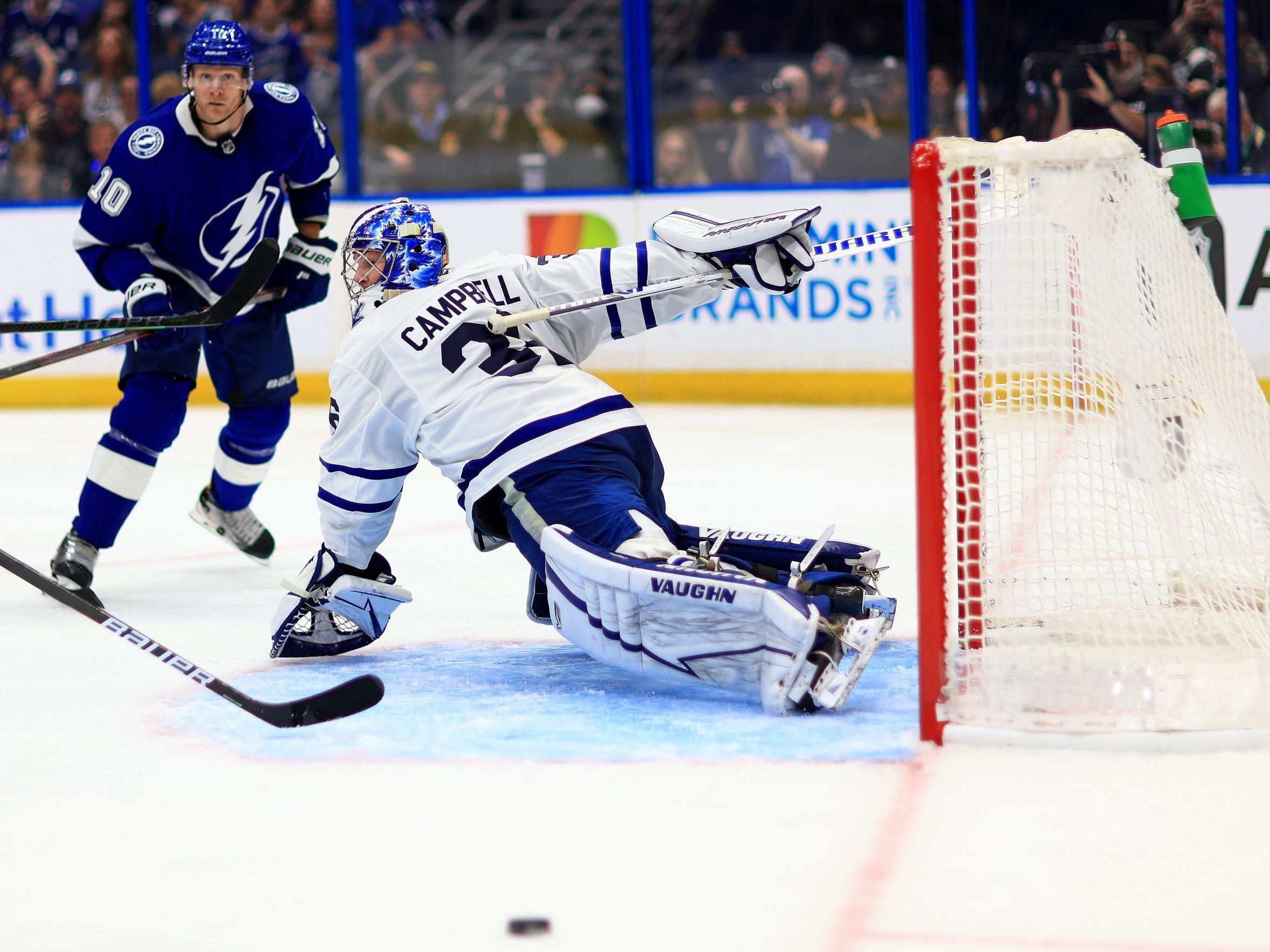 TAMPA — Losing is understandable. Losing like this is not.

The two-time Stanley Cup champion Tampa Bay Lightning didn’t just beat the Maple Leafs at a crazed Amalie Arena on Sunday night. It stomped on their hearts. It took their breath away. It made them look like playoff imposters.

It blitzed the Leafs from beginning to end, from the outside and in and Toronto had no answer, no pushback, no fight, and no strategy of any kind in a 7-3 Game 4 shellacking by the Lightning.

The game did not in any way.

Sunday night began badly for Toronto, ended badly, and in the between wasn’t much to see either. There was barely a glimpse of anything resembling pride, anything resembling effort, or a willingness to compete at a level necessary to advance anywhere in the Stanley Cup playoffs.

This loss was that complete, that nasty, that disheartening. And it was also that certain. And this best-of-seven series is now tied at two games apiece but it sure doesn’t feel that way. It feels as though coach Jon Cooper has solved the Leafs, found the answer every playoff series requires, coming up with the formula in which to attack his opponent. He talked a little about it on Saturday. He said he didn’t worry about what Toronto might do: And then his team demonstrated why.

That was going to happen on offence. And now the Lightning doesn’t appear to be heading for apparent defeat, even with the series now reduced to a best of three with the knockout victim Leafs wobbling with mouths open, on the ropes.

On the ice, the Lightning owned the scoreboard, the boards the loose pucks, the pucks behind the net, all of it predicated on its quickness and physical play — two areas in which the Leafs came up horribly short Sunday night.

This was a team defeat. The Lightning played a terrific game and just about everybody on the Leafs did not. The club got blitzed. The coaching staff got blitzed. Starting goaltender Jack Campbell got blitzed and he would have been pulled after giving up the fourth goal had the Leafs been equipped with an adequate backup goalie. Instead, coach Sheldon Keefe waited until Tampa’s fifth goal before making the change.

Campbell allowed five goals on 16 shots. On three of those goals, a series of mistakes were made before the puck even got to him. One he should have caught. One he should have cleared. He was no different than everyone playing around him. Nobody handled the puck with anything resembling urgency, or an ability to handle pressure.

But the mistakes began before the game began. This was one of those old-style Chicago Stadium games, where the visiting team had to weather the first five minutes of crazed noise to get through the night. Dubious defenceman Justin Holl was a curious starting lineup choice by Keefe and didn’t get through the first minute unscathed. Neither did the team.

Holl gave the puck away at least three times on his first shift — he was part of the storm — before Steven Stamkos scored his first goal of the series on a perfect pass by the perfect passing Nikita Kucherov. Why Keefe would choose to start his weakest defenceman to start the game— that’s something he’ll be forced to explain today and maybe tomorrow.

The first mistake was made in filling out the starting lineup. The rest just followed. When a 20-goal scorer like Pat Maroon blows past an apparent all-star like Morgan Rielly on defence, well, you know it’s not going to be your night. Maroon has had 20 goals the past three seasons. That was just part of the jaw-dropping, mistake-filled, night for the Leafs.

The Leafs trailed 5-0 just over 25 minutes into the game. If this was a fight, which it wasn’t, it could have been stopped then. Now it’s a best-of-three.

Toronto has been in this position before — just never against an opponent of this quality. This isn’t Montreal they’re playing. This isn’t Columbus. This may be possible but it may also be improbable. These are the fricking Stanley Cup champions we’re talking about.

The Leafs didn’t play the game — they chased it. “We knew it was coming,” said captain John Tavares. That’s what is most worrisome today.

They knew it was coming and had nothing resembling an answer.