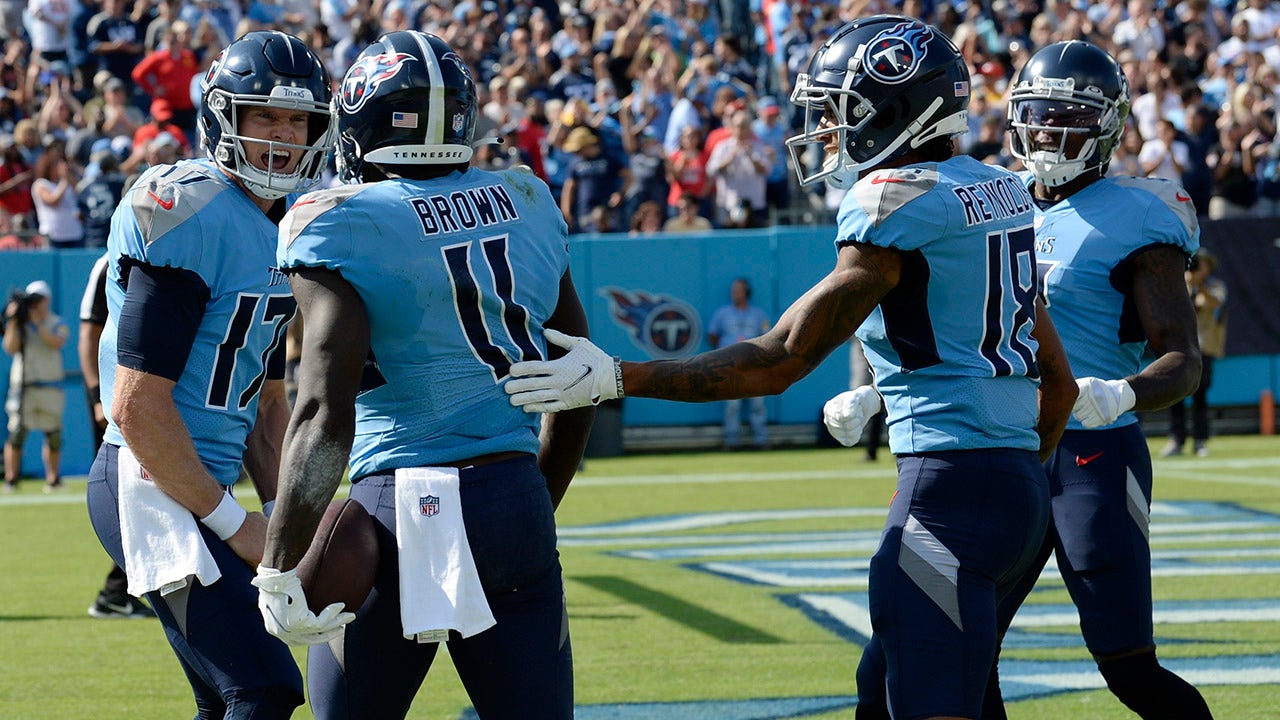 Two weeks ago the Tennessee Titans were mired in something of a so-so season and even had a loss to the previously winless New York Jets as glowing, ugly stain on their record. But in the span of the last seven days they’ve beaten the two teams who played in last season’s AFC Championship game in consecutive games.

So who’s doubting the Titans are AFC championship contenders now?

The Titans not only beat the Chiefs but kind of beat them down on Sunday, authoring a 27-3 victory that was stunning in its thoroughness.

Tennessee Titans inside linebacker Rashaan Evans (54) celebrates after intercepting a pass against the Kansas City Chiefs in the first half of an NFL football game Sunday, Oct. 24, 2021, in Nashville, Tenn.
(AP Photo/Wade Payne)

“When we win games, you know, people try to find all types of reasons why we’re not going to win the next game and that type of stuff,” safety Kevin Byard said. “But they don’t ever talk about how physical we are as a team.

“It may not be pretty, I think I’ve seen a stat like last week that said we have the most come-from-behind wins in the fourth quarter. That’s because of the physicality and the way we play games. We might not be pretty at first but toward the end of the game that stuff wears on teams. So, like I say, great to have a win today.”

And that has the Titans, leaders in the AFC South race, feeling pretty good about themselves right now.

(Yeah, sticking with Byard because he got on a roll — kind of like his team).

“There’s not a team in this league we don’t think we can’t beat [on] any given Sunday,” he added. “Power rankings, all that stuff, it really doesn’t matter in this league. You don’t come out here and don’t perform on Sunday, you’re going to get your behinds whupped. We know about explosive teams and how great Kansas City is but at the end of the day we felt like we can go out here and get a win.

“That’s the bottom line. We don’t really look at who’s the best team here and there. They’re not handing out Lombardi trophies in the middle of the season.”

The Titans had a built-in excuse for not performing this game because they had a short week to prepare after playing and beating Buffalo on Monday night. But the schedule actually might have worked in their favor.

“We definitely used the momentum,” said receiver A.J. Brown. “It’s just the approach, a mentality we brought into this game. We started out pretty good and kept going and defense backed us up.”

The Titans had three takeaways, including an interception by linebacker Rashaan Evans. Those turnovers helped turn the beating into something more.

It made the beating seem easy, frankly.

“You’re embarrassed,” Chiefs quarterback Patrick Mahomes said afterward. “You got spanked pretty good. You were coming in here trying to build off the momentum of the week before and we didn’t do that, so I mean, it’s just trying to find a way to get better for next week because it pays for you to get better and better in this league if you want to get where you want to be at.”

The Titans are the first defense to keep the Chiefs from scoring a touchdown in a game Mahomes has started. The Titans also limited Mahomes to a 62.3 QB rating, the lowest of his career.

“It is definitely an awesome accomplishment,” Titans outside linebacker Harold Landry said. “With guys like Jeffery Simmons in the middle and (Denico Autry), it definitely makes things easier on the edge.

“It is a huge accomplishment. Mahomes is a great quarterback and they are a great team. We are definitely going to celebrate this one tonight and then move on.

Tennessee Titans wide receiver A.J. Brown (11) takes a picture for a fan as he leaves the field after the Titans beat the Kansas City Chiefs 27-3 in an NFL football game Sunday, Oct. 24, 2021, in Nashville, Tenn.
(AP Photo/Wade Payne)

“No, we weren’t surprised at all to be honest,” Evans said, “just because of the work we put in throughout the week. Coach constantly harps on us to not be surprised about how comfortable it is — especially when you do what you’re supposed to do.

The Titans, perhaps the NFL’s third-best rushing offense, did much of their good work by passing the football. They scored two of their three touchdowns through the air, including one by running back Derrick Henry.

Facing off against Mahomes, Titans QB Ryan Tannehill had the better showing. He was mostly accurate, completing 21 of 27 passes for 270 yards with 1 touchdown and 1 interception.

Mahomes, meanwhile, had a rough day. He came into the game suffering from more interceptions than anyone has come to expect — he’d thrown 13 interceptions in his last 14 games — and that continued.

Mahomes threw the one interception and also fumbled twice, losing one, so he had two of his team’s three turnovers.

The Titans also sacked Mahomes four times and eventually knocked him silly and out of the game. Mahomes was placed in the NFL concussion protocol.

Mahomes cleared the concussion protocol but coach Andy Reid decided it was best to hold him out the remainder of the game.

“We got to eliminate the turnovers and the penalties,” Reid said of his sagging offense. “Again, these are things that we haven’t — haven’t been common to us. I’m seeing things that I haven’t seen before. And we just got to fix it.

“And the players, they know that. And I got a good locker room. And, again, they’ll continue on with it and the coaches will continue to do it. It starts with me. Completely my responsibility and fault for how we played today. And, you know, the coaches feel the same way about it. So we all got to piece it together.”