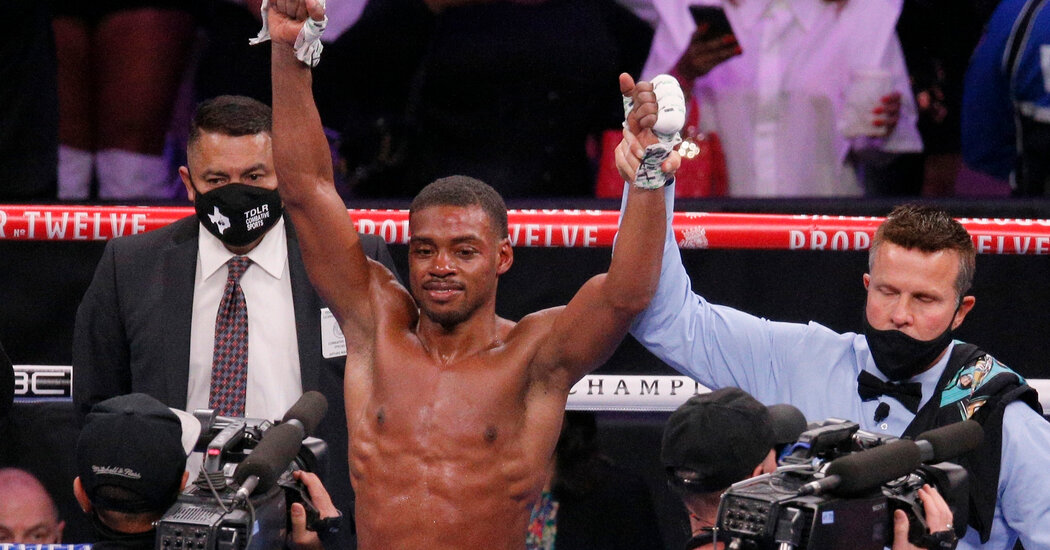 At first, Errol Spence ignored the dot that appeared in the peripheral vision of his left eye in August 2021. His imminent welterweight title bout against Manny Pacquiao outweighed this mysterious new problem.

And when a pre-fight eye exam revealed a torn retina — an injury that can end a boxing career — Spence said he offered to sign a waiver affirming he acknowledged the risk and planned to compete anyway.

“In that moment, you want to fight,” he said.

A win over Pacquiao could have vaulted Spence, who was born on Long Island and raised in Dallas, from famous among boxing fans to just plain famous. It is a critical distinction in a sport in which the athletes’ pay depends on the size of the audience they draw.

Predictably, commission officials in Nevada did not clear Spence to compete, and he was replaced by Yordenis Ugas, who outclassed Pacquiao to win in a decision. Spence headed to surgery and the second long layoff of his career. Ugas won the World Boxing Association title, and the acclaim that accompanies besting a legend like Pacquiao.

That series of plot twists sets up Saturday night’s showdown between Spence (27-0, 21 knockouts), who holds the World Boxing Council and International Boxing Federation titles, and Ugas (27-4, 12 knockouts). It is not the bout boxing fans have most coveted; that would be a match between Spence and Terence Crawford, another undefeated welterweight. But the winner on Saturday night at AT&T Stadium in Arlington, Texas, will emerge with three of the four major titles and a legitimate claim as the best fighter in a highly competitive division.

While both fighters have championships, Spence enters as the clear A-side. The bout will take place just outside Dallas, where Mayor Eric Johnson declared Saturday “Errol Spence Day.” Organizers expect more than 40,000 spectators, most of them Spence partisans eager to see him clear one last obstacle between him and a megafight with Crawford. That potential pairing remains the most intriguing in the division.

“The welterweight division has always been a glamour division, from Sugar Ray Leonard to Oscar De La Hoya to Floyd Mayweather,” said Stephen Espinoza, president of Showtime Sports, the pay-per-view partner for the fight card on Saturday. “That’s the secret recipe, and it’s really not a secret. You match up the elite fighters, and you usually get fireworks.”

But the eye surgery last year sidelined Spence, and he has not competed since his decision win over Danny Garcia in December 2020. And the Garcia bout was itself a comeback, Spence’s first fight since a fiery car crash in October 2019 that left him hospitalized for a week.

For his part, Spence maintains that the crash, the surgery and the layoffs they caused have not diminished his skill.

“It helped me train more,” Spence said. “It’s not like I had another job or a 9-to-5. Most of my time was being spent with my family and my kids.”

Still, the long absences have flattened the career trajectory of a fighter who, after defeating Shawn Porter in September 2019, appeared set to reach a new level of fame. Now, questions linger around how well Spence, at 32, can rebound from a second major medical issue. Instead of taking a tuneup fight against a fringe contender, Spence elected to face Ugas, whose profile and confidence have grown since he dismantled Pacquiao last year.

Similarities abound. Both boxers are skilled and aggressive, punishing body punchers equally comfortable in a tactical match or a close-quarters rumble. And both have navigated career delays. After consecutive losses in 2014, Ugas left boxing for more than two years before moving from New Jersey to Las Vegas and connecting with his current trainer, Ismael Salas, a fellow Cuban émigré.

The older cohort includes Olympic gold medalists like Yuriorkis Gamboa and Guillermo Rigondeaux, former world champions now in their early 40s who are still active but no longer elite. Rigondeaux has lost two consecutive bouts, and is recovering from a household accident that nearly blinded him. Gamboa, who has also lost two straight, will face Isaac Cruz on the undercard on Saturday.

The younger group includes recent defectors like Robeisy Ramirez, and Olympians like Andy Cruz, a gold medalist in Tokyo, who is part of a group that the government in Cuba, which outlawed pro sports in 1961, has allowed to compete as professionals.

Defeating Pacquiao made Ugas the first Cuban-born welterweight champion since Jose Napoles, who had two title reigns between 1969 and 1975. A win against Spence, Ugas said, would resonate among Cuban communities worldwide.

“It’s a historic night for Cuban boxing,” Ugas said. “It’s a big stage. A lot of people are proud of me.”

Saturday’s winner will have high-stakes options for his next bout.

Most notably, there’s Crawford, whose promotional contract with Top Rank expired last November and who sued his former promoter in January. If stalemates between promoters and broadcast partners have prevented major fights in the past, Espinoza said Crawford’s free agency removed that obstacle.

“We have a better opportunity to make the Crawford fight after this fight than we’ve had in a long, long time,” Espinoza said.