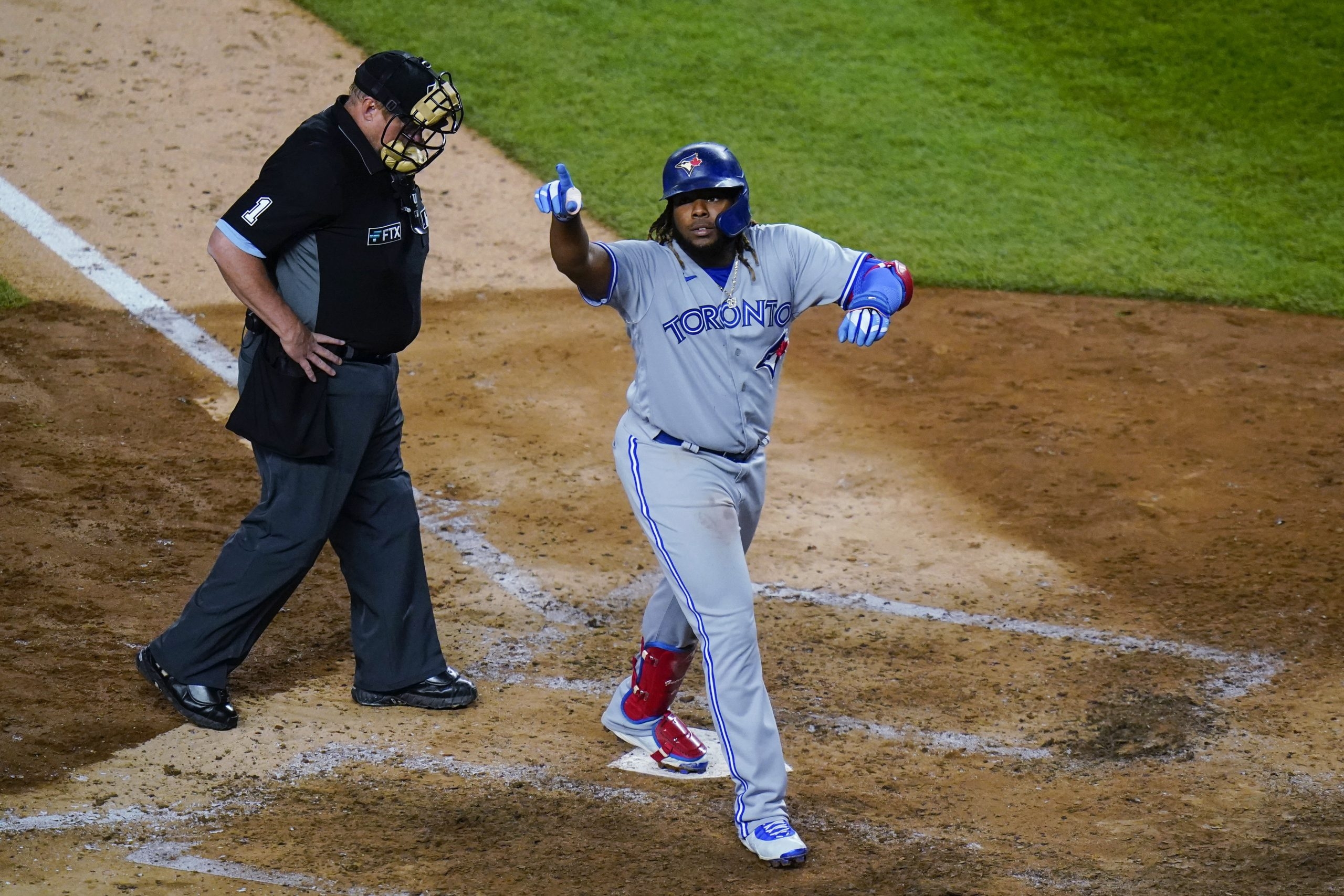 NEW YORK — Cavan Biggio has seen the act before, marvelling at the mastery of his famous Blue Jays teammate when Vlad Guerrero Jr., was still a teenager.

The guys in the visitors bullpen at Yankee Stadium saw the second of their teammate’s three home runs on Wednesday night clear the fence in front of them before the ball pounded into the wall behind them with a thud as the startling punctuation.

Some of their jaws may still be open in reaction to what literally almost hit them.

Like anyone who witnessed Guerrero’s greatest night yet in a career that is truly just getting started, Yankees manager Aaron Boone appreciated the accomplishment for the spectacle that it was.

“It’s about as impressive as it gets,” Boone said prior to Thursday’s rain-delayed finale of the four-game series between the Jays and the Bronx Bombers. “A great performance by a great hitter.”

That understated description from Boone may be appropriate, given that the run on superlatives could be exhausted the deeper the season moves.

There have been many big nights of “other-worldly hitting” — as Boone termed Wednesday’s display — in Guerrero’s journey to this point.

That includes a three-homer night last season, though it was in an understated inter-league meeting with the Nationals in D.C., not at Yankee Stadium in a divisional showdown with the iconic Yankees.

There was the first homer of his career back on May 15 of 2019 in San Francisco, a momentous night that didn’t end before Guerrero made it his first two-homer game.

And. of course. there was Guerrero’s towering blast that earned him MVP honours at the 2021 all-star game in Colorado, which created its own awe-inspiring reaction.

Hitting a pair of round-trippers (and a double) off of New York ace Gerrit Cole on Wednesday certainly feels like the best yet, however, given that Guerrero completed the homer hat trick later in the game. It certainly accelerated the legend of Vlad and may have marked the unofficial kickoff of his campaign for 2022 American League MVP.

Reaction in the New York tabloids on Thursday morning was both cheeky and reverent.

“Whose Your Vladdy?” screamed the New York Post. “Hot Blooded” was the Daily News headline while Newsday chimed in with “Vlad the Impaler.”

Just when you think you’ve seen it all with the 23-year-old Dominican, he comes up with a new measure of magnificent.

“I’m used to it,” said Biggio, who grew up with Guerrero in the Jays farm system and has seen his celebrated teammate dominate at every level of professional baseball.

“I’ve seen this since Vladdy was just a teenager doing incredible things. But last night was an unbelievable night for everyone who was here and for Vladdy, of course, but especially for baseball.

“I think what (2021 American League MVP Shohei Ohtani) has done in L.A. kind of overshadows how special Vladdy is. He’s the best hitter in the league.”

On Wednesday, Biggio had a front-row seat to the drama and the mayhem that was taking place in the Jays dugout after Guerrero was bleeding profusely and looked for certain to be leaving the game after getting stomped by the spiked foot of Yankees base-runner Aaron Hicks, who was beating out an infield single.

Biggio was quickly scrambling to come in as a defensive replacement for Guerrero when his pal trotted out to the field to finish the second inning. Moments later, Biggio saw the gore as Jays trainer Jose Ministral cleaned up the mess and then watched with awe as Guerrero went out to finish the second inning defensively and then came back in the third to victimize Cole for his second long ball of the night.

“He’s always been a great player but his want to win is getting stronger and stronger every year,” Biggio said. “His confidence and ability to do that is going to help this team do what we’re going to do.”

When that second blast landed in the bullpen, the Jays relievers just shook their collective heads — much as Cole did on the mound as Guerrero trotted around the bases.

After watching the replays of all of Vlad’s Wednesday hits, closer Jordan Romano still doesn’t know how his big-hitting first baseman got to all of them.

And just to add a mythical element to it all, Guerrero was back in the Jays lineup on Thursday, his finger a little sore in the aftermath of the Hicks spiking and the two stitches need to repair it.

With four homers on the season, Guerrero has now hit 76 in the first 350 games of his big league career, the most in club history.

As much as his teammates have grown accustomed to Vlad’s act of greatness, they can still appreciate the extraordinary quality to nights like Wednesday.

As Biggio noted, baseball benefits from the superstars and teammates and opponents alike are unabashedly in full admiration mode of one Vlad Guerrero Jr.

“I wish it was against somebody else,” Judge said. “I could watch it on TV and not see it live. That’s the type of player he is. He can take over a game.

The guy is a game-changer and he’s going to be a tough opponent all year.”