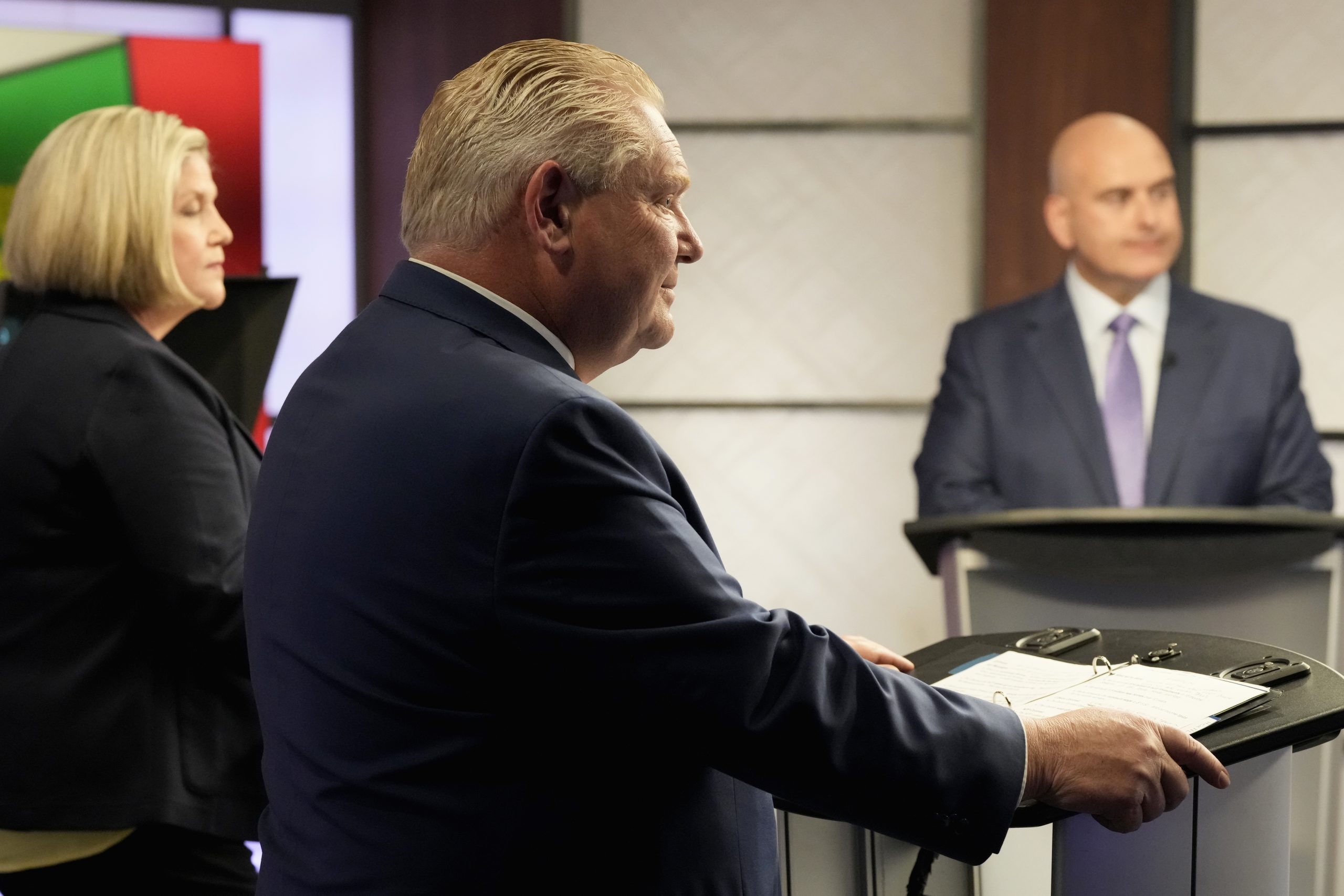 “I’m sure this is not the most fun thing you’ll do on a Monday night,” NDP Leader Andrea Horwath said, kicking off the Ontario Leaders’ Debate at the TVO Broadcasting Centre in Toronto.

Horwath, responding to Del Duca’s comment about moving on from 2018 when the previous Liberal government was defeated by voters, asked the Liberal what he was doing at Kathleen Wynne’s cabinet table.

“You’d love to leave all that stuff in the rear view mirror but I’m sorry you left a wreck behind you and you have to step up and take some responsibility for that,” Horwath told Del Duca. “Where were you when all these decisions were being made. Were you out getting a coffee at the cabinet table?”

To Horwath, Del Duca said, “Every time you attack me as you’ve done for a year Doug Ford smiles. Progressives need real leadership and that’s what we’re offering.”

Del Duca focused more on Ford, asking the Premier whether he has actually spoken to a teacher, student or parent recently.

“Because if you have you will hear about anxiety, mental health challenges, that feeling of abandonment because you have cut, because you have underminded,” Del Duca said to Ford. “Yet he’s here tonight bragging like he deserves a metal or a pat on the back… your record on education Mr. Ford is an embarrassment and you should be ashamed of yourself for what you have done to kids across this province … You, Sir, have failed this province.”

Green Party Leader Mike Schreiner repeatedly went on the offensive against Ford, accusing him of building Hwy 413 to help developer friends at the expense of the environment.

The Green Party leader asked Ford if he’d looked someone in the eye who’d lost someone in long-term care (LTC) during the pandemic.

“We are better than this as a province,” Schreiner said. “We put people and care ahead of profits.

Ford spent some time attempting to lump his three main opponents together with his party as the only clear alternative.

“I appreciate the compliments from all three of them,” Ford quipped. “Mr. Del Duca, first of all I can’t believe the gall — you were the one and your party sold one of our crown jewels, you sold … Hydro One. You know something? You drove up hydro rates to the highest rates in North America. You drove out 300,000 jobs.” Ford said at least Schreiner has been upfront about raising taxes and regulations, and suggested the other two opponents could learn from him.

The Green Leader described climate change as the biggest challenge facing the world, and said protecting farms and people from flooding is not red tape.

Asked what they would do to make life more affordable, Horwath said people are worried about the future, buying homes, rent going up.

“Everyday folks in this province should be able to afford everyday life,” she said, adding the NDP plan would achieve that goal.

Del Duca said he signed an affordability pledge Monday with ideas such as buck-a-ride, $1 transit fares across Ontario.

Schreiner said the Green Party would get speculators out of the housing market and help make electric vehicles more affordable for average citizens.

The $10-billion Hwy 413 project would devastate the environment and pave over farmland, Schreiner said in a view shared by Del Duca and Horwath.

“I stopped it the first time,” Del Duca, a former Transportation minister, said, while explaining he would use those funds to repair and rebuild schools.

Only Ford is promising to build the highway.

Gridlock is costing the province tens of billions of dollars a year, Ford said.

Renters are looking at increases of 30-40%, Horwath said.

“How can anybody be expected to come up with that kind of money?” she said.

The NDP is promising rent control on all buildings in Ontario.

Ford said there have been more housing and rental starts under his tenure than in 30 years.

Del Duca said Liberals would clear the surgical and diagnostic backlog in two years with a $1 billion investment – “and we’re going to do it within the public system.”

Hospitals were “on their knees” under the previous Liberal government, Horwath said.

Del Duca said Ford was warned in early 2021 by the Ontario Science Table that he shouldn’t reopen the province too soon, but chose to go ahead and saw a surge in COVID-19 cases.