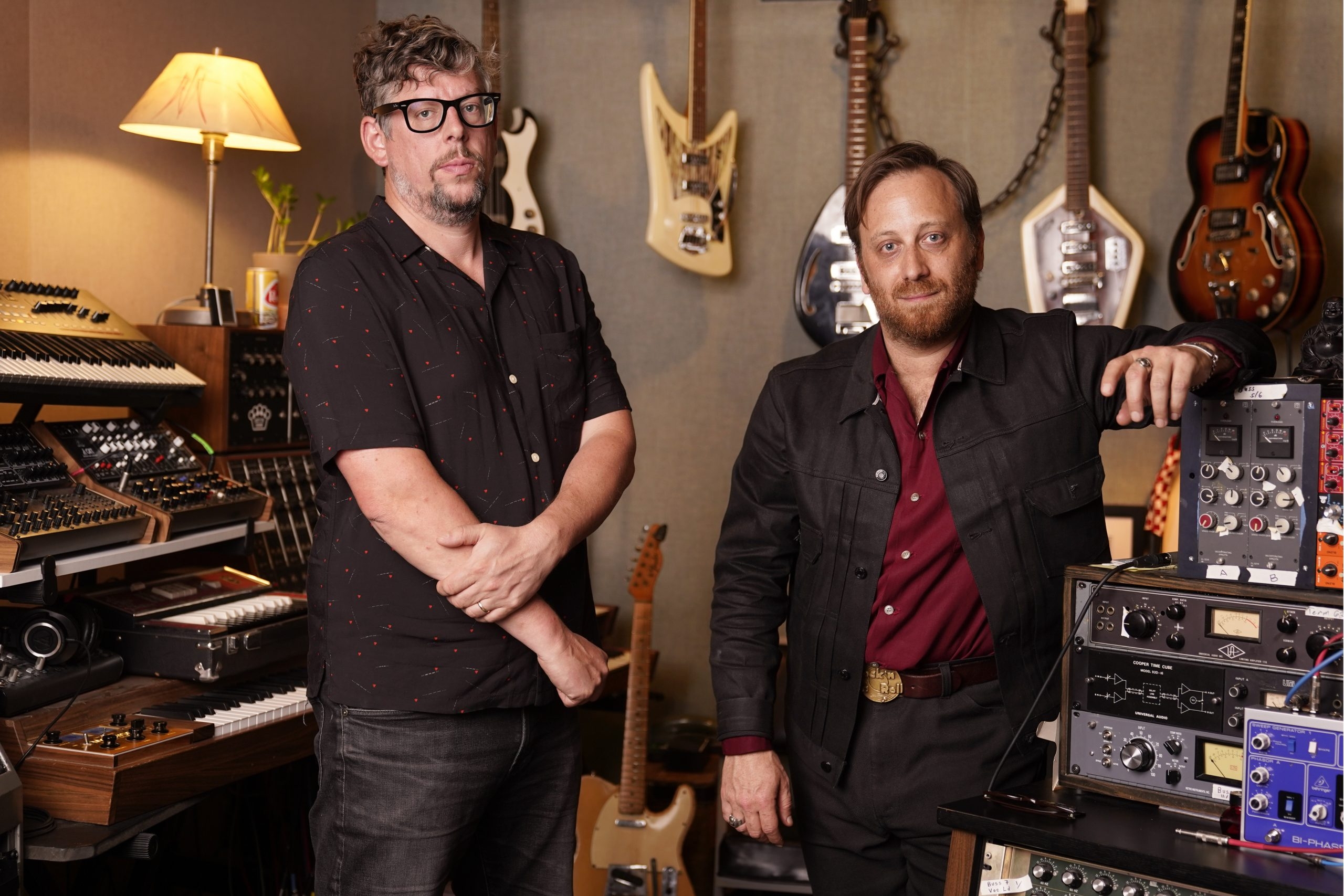 Twenty years into a blues-rock career that began in an Akron, Ohio, basement, drummer Patrick Carney says that the Black Keys are in the best musical headspace they’ve ever been in.

After working nonstop since their 2002 debut, The Big Come Up, Carney and vocalist/guitarist Dan Auerbach hit the brakes following a world tour for 2014’s Turn Blue.

The garage rock duo returned in 2019 with Let’s Rock, but it was 2021’s Delta Kream, an impromptu pandemic release on which the pair recorded blues classics, that relit the fire between the multi-platinum Grammy winners.

“When Dan asked me to come to the studio to make Delta Kream, it ultimately ended up becoming a giant reset for the band,” Carney, 42, says down the line from Nashville. “We went in there without any expectations and just approached what we were doing with no commercial expectations and we only thought about the music.”

Inspired by the ease of making that record, the twosome re-entered Nashville’s Easy Eye Sound last summer to record the songs that make up the 10-track Dropout Boogie, the Keys’ recently released 11th studio album.

“When things became slightly difficult from a writing standpoint, instead of putting things on the back burner, which we would typically do, we decided to call in some friends to help us finish songs,” says Carney, who is married to singer-songwriter Michelle Branch.

From the album’s foot-stomping anthemic first single Wild Child, to the sludgy blues jam of Happiness, to the sinewy riffs of Your Team is Looking Good, the LP captures a number of first takes that hark back to the stripped-down blues rock of their early days.

“That’s always been the beauty of the thing Pat and I do. It’s instant,” Auerbach says. “We’ve never really had to work at it.”

Carney says that the album strengthened a bond that first began when the two met in high school.

“A lot of bands don’t make it. It’s hard for a band to stick together,” he says. “You go through so many emotions and ego comes into play. If you can make it through all that s—, then you’ve got something that really is going to last. It’s no different than a marriage in a sense. If you can get through the honeymoon phase and the kid phase and the empty nest phase, you’re good to go.”

After their tour for Let’s Rock was cut short by the pandemic, the Keys will return to the road this summer (they play Toronto’s Budweiser Stage on Sept. 6), probably the happiest they’ve ever been in their 20-year history.

“Dan and I talk on the phone now more than we ever have in the past and we text each other. For the first time, really, we are hanging out with one another outside of a tour, which is unusual for us. Middle-age men have trouble making friends, but Dan and I have been friends since we were kids and that friendship has just gotten stronger,” Carney chuckles. “Maybe it’s because we’ve gone through a bunch of s— together.”

In a mid-morning call from his home in Nashville, Carney spoke about the Black Keys’ next act and reflected on the key to their rock ’n’ roll survival.

We spoke at the end of 2020, and when Delta Kream came out last year it was a surprise to my ears. How did that LP light the fire for Dropout Boogie?

Making something so quickly felt freeing and after we finished Delta Kream it became one of my favourite Black Keys records even though it’s just improvised jam session of covers. There was something about that record that was special to me. When we decided to get back into the studio last summer to make this record, that experience completely informed Dropout Boogie. We really embraced the improvised part of making music. I think we really got our groove back with Delta Kream, and we were really able to apply that to this record. Our friendship and our personal relationship has never been better. I don’t really know why it took so long for things to be this good, but it’s coinciding with our 20th anniversary of our first record.

Twenty years is a long time in the music business. What do you think the ingredient was that kept you guys going?

I think initially when we first started the band, we had nothing to lose and everything to gain. Our outlook was finishing school and doing a job that we didn’t really like. That didn’t seem too appealing. It was more appealing to get in a van and try and make it. When you are in your early 20s, and you come from a place like Akron, you’re willing to put the work in to live that dream. Together, we were able to do that and the incremental successes felt like milestones. When we moved up from (Toronto’s) Lee’s Palace to the Opera House to the Kool Haus, we were just getting to the next place.

I remember seeing you guys in smaller venues here in Toronto and then you exploded in popularity after Brothers released in 2010. Was that hard?

It got exponentially harder for us when things started going well. I think by the time Turn Blue came out that is when we were struggling the most, and I don’t know why. Sometimes when you reach a summit, you can lose perspective on what got you there in the first place. But after our break, we got to a point where we could look at something like Delta Kream as being an extreme success, and it had nothing to do with sales. It was the kind of record we always wanted to make and I think it really lit the fire for us to make Dropout Boogie. I feel like we’re reaching a good place creatively. The music is coming easy and our relationship is really enjoyable.

Is it easy for you to maintain that drive and love of music 20 years in?

The music comes easy. Overexposure and working too much were the challenges. I see it now with some bands that are getting really hot and I think, ‘Yeah, the hard part’s still to come.’ if you don’t give yourself a break, that’s when things get tough. I’ve been playing my son a lot of music — he’s two-and-a-half — and he’s finicky when it comes to stuff. When I start to see his little eyes perk up it reminds me why I wanted to play music. When I go into the studio to make music with Dan it’s a reminder that we’re there to try and make something special.

What does your son think of Dropout Boogie?

I’ve only played him bits and pieces. He’s into Wild Child and he really likes It Ain’t Over.

You just mentioned Wild Child and the video for that one is great. Gosh, I remember loving music videos.

We used to watch MuchMusic in Akron. We’re only like 60 miles from the closest part of Canada. At one point I had a deep knowledge of Toronto and Canadian indie music, like I loved the Inbreds. I remember the first time I saw Sonic Youth was on there. I have a 16-year-old stepdaughter and she kind of gets the concept of music videos, but I think it’s more for us old heads.

In that video you two get a job in a high school. What were the both of you like as teenagers?

You know, I really enjoyed high school. I never played a sport, wasn’t in any clubs, never did anything extracurricular, didn’t get good grades, but I loved the social aspect of it. And music was my thing. It was my salvation in high school, really. I was never the best musician out of my friend group, but I always played and I had a passion for being in a band. I’d form bands and when those broke up, I’d look for other people to make a band with. Dan was on the soccer team and he was cool and low-key, but he was a loner. I didn’t know he was into music until the end of high school. When we first started jamming it was a perfect match because we both have a strong work ethic, we were both focused on wanting to do it and we both believed that we could make it. We were like the odd couple — he was the cool, popular kid and I was the loudmouth, indie geek.

How did you tune out people who said you’d never make it?

When I told my dad and grandfather that I was going to drop out of school to make music, my dad was against it, but my grandfather — who had a PhD in chemical engineering — he was surprisingly supportive. He said, ‘Give it two years and if it doesn’t work out you can go back to school.’ So I got a pass for two years, but within a year of having that conversation we had been featured in Rolling Stone and things started happening. My grandfather died in 2010 right when Brothers was peaking, and he had pretty deep dementia towards the end, but he was always pretty proud of the band.

So, what do you think your luckiest break was?

(Laughs) Honestly, growing up near to Dan.

Dropout Boogie is out now.