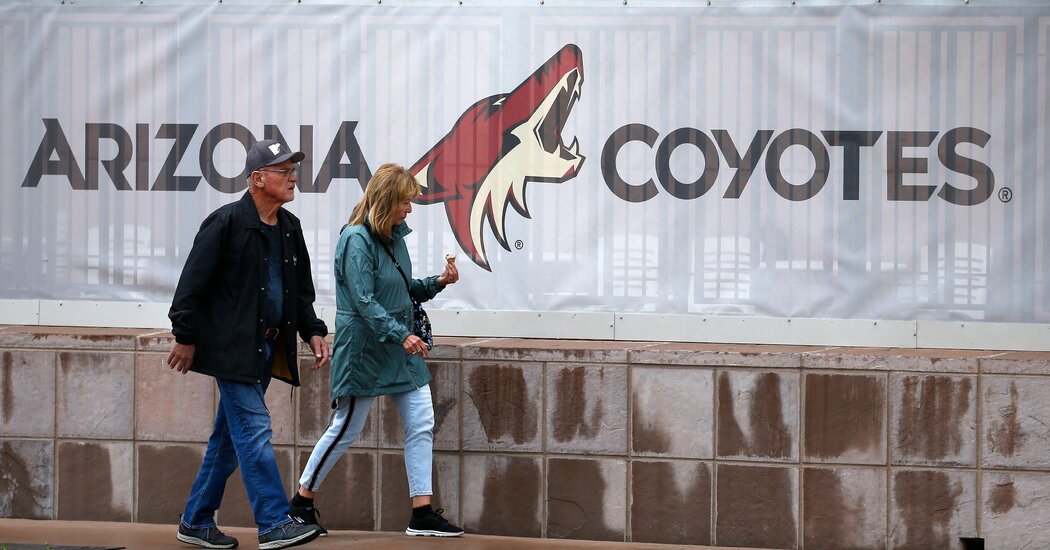 Over the last 26 seasons, the Arizona Coyotes have at times been bankrupt, ownerless, a ward of the N.H.L., the subject of relocation rumors, and, more recently, in a prickly relationship with the owners of their home arena. The team has long struggled to draw fans to its suburban rink, and it has never contended for the Stanley Cup, despite putting Wayne Gretzky, hockey’s “GOAT,” behind the bench for four seasons.

This month, the Coyotes may have reached a nadir. Glendale, Ariz., threatened to lock the team out of Gila River Arena in the middle of its season because Alex Meruelo, the team owner, owed $1.3 million in unpaid state and city taxes and arena operating costs from last season.

The City of Glendale, which was owed about $250,000 in taxes, had told Xavier Gutierrez, the Coyotes’ chief executive and president, that it would cancel the team’s business license if the total amount was not paid by Dec. 20.

Ahead of the deadline, but not before the Arizona Department of Revenue put a tax lien against the Coyotes’ parent company, IceArizona Hockey L.L.C., Meruelo paid $1.3 million to state officials and ASM Global, the company that manages Gila River Arena for the city.

On Dec. 9, the morning after the Coyotes received a letter from the city manager Kevin Phelps, the team released a statement blaming the unpaid bills on “human error.”

However, the N.H.L.’s most persistent headache and, at $400 million, the least valuable of its 32 franchises, faces even bigger problems. The Coyotes will be without a home at the end of this season with no alternative in sight.

Glendale, a suburb of Phoenix, has made it clear since August that it is tired of wrangling over unpaid bills. Phelps says the relationship between the team and the city is over when its lease expires on June 30, 2022.

“We’re going to continue to work hard to protect the interests of our taxpayers,” Phelps said. “We will not hesitate using every mechanism and tool that we have if they are not meeting their end of the obligation. I hope that the N.H.L. and the team, in particular, know that when I say that they don’t think that I am bluffing.”

He said that the Coyotes are current on their bills through December but will owe about $4 million by the end of June.

“We decided we weren’t going to wait until the kids were out of high school to get the divorce,” he added.

Relocation is a notion more than a practical solution. Quebec City and Houston have both been floated before as potential homes for the Coyotes. Both cities have arenas fit for the purpose. In Houston, the Toyota Center is owned by Tilman Fertitta, who also owns the Rockets of the N.B.A.

“The Coyotes aren’t going anywhere,” Bettman said last week after the league’s annual board of governors’ meeting wrapped up in Palm Beach, Fla. “They’re going somewhere else other than Glendale, but they’re not leaving the greater Phoenix area.”

However, Bettman, who has long been intransigent on the subject, also said that he planned to meet with representatives of the Quebec government in January, but brushed aside questions.

“Other than scheduling the meeting, I don’t know what the specifics are of what they want to talk about other than at 10,000 feet we can all figure that out,” he said.

The Phoenix metropolitan population of almost five million is the 10th-largest in the United States, and the 11th-largest Nielsen TV market.

Neither an N.H.L. spokesman, or Bill Daly, the league’s deputy commissioner, responded to emails seeking comment and further clarification of Bettman’s remarks. The Coyotes also declined to comment.

Houston has long been rumored as a relocation site for the Coyotes, since its metro population is the fifth-largest in the U.S. with 7.1 million people. Fertitta spoke with Bettman in 2018 about acquiring an N.H.L. team but has not said anything recently. A Rockets representative did not respond to an email seeking comment from Fertitta.

But relocation has long been seen as a solution to the Coyotes’ problems, since Richard Burke, the Coyotes’ original owner who moved the Winnipeg Jets to Phoenix in 1996, sold the franchise to the Phoenix real-estate developer Steve Ellman in 2001.

Ellman was the first in a long line of underfinanced owners whose misadventures kept the team in the headlines for years. This included a stretch from 2009 to 2013 when the N.H.L. carried the team financially and then purchased it out of bankruptcy before selling it to another group with precarious finances.

The team was also saddled with Ellman’s decision to reject an arena deal with the City of Scottsdale, next to Phoenix in the East Valley, where many of its wealthy fans lived. He instead went to the West Valley and Glendale, on the other side of Phoenix, and the small city of 250,000 paid most of the $220 million it cost to build the arena, which opened in December 2003. The city also let Ellman establish an entertainment district around the arena with sales-tax revenues supposedly paying down the arena cost.

For the most part, fans in Scottsdale have failed to make the roughly 25-mile drive to Glendale.

Meruelo, 57, bought a majority share of the team for $300 million in 2019. The California-based businessman is said to be a billionaire with interests in media, real estate and casinos, including the Sahara Las Vegas.

But unpaid bills and other financial disputes piled up. In February, The Athletic detailed Meruelo’s ownership style, including cases of late contract payments to players, unpaid bills to vendors and strained relationships with corporate sponsors.

Phelps said that his first meeting with Meruelo, several months after he bought the team, was prescient.

“We hadn’t met more than two minutes when he looked at me and said, ‘We’re not going to pay you one more dollar to use that arena,’” Phelps said.

At a meeting shortly after that with ASM, the arena management company, Phelps said Meruelo used much the same statement. Phelps came to believe, like others who did business with Meruelo and his company executives, that their style was to refuse to pay a bill and dare the creditor to sue.

“It’s not just by happenstance,” Phelps said. “It may be built into the culture and value of the organization that they can wear a creditor down and negotiate a better deal.”

It will cost a lot of money to keep the Coyotes in the Phoenix area. The goal of Meruelo and Gutierrez is to finance and build a $2 billion arena and entertainment district with hotels, restaurants, retail and residential components in the city of Tempe, which is on the east side of Phoenix, in time for the 2025-26 season.

In the meantime, they must find an alternative arena while the Tempe project goes through the approval and building process. Alternative venues are either unsuitable or require millions of dollars to be brought up to N.H.L. standards.

The Tempe site is on city-owned land and requires remediation of a large landfill site before it can be developed. Phelps thinks this could take as long as six years before the arena is ready.

In the meantime, the Coyotes, currently the worst team in the N.H.L. with only five wins, need somewhere to play next season. Robert Sarver, who owns the N.B.A.’s Phoenix Suns, the W.N.B.A.’s Phoenix Mercury and their Footprint Center, the only major arena aside from Gila River, has rejected several approaches over the years about taking in the Coyotes.

The hockey club has two choices, both expensive. They are talking to the Arizona Diamondbacks of Major League Baseball about building a permanent ice rink at Chase Field. The logistics of placing an ice surface in a baseball stadium that seats 48,405 fans are awkward at best; ask the Tampa Bay Lightning.

The other choice, suggested by the N.H.L., is to build a temporary structure in either the East Valley or West Valley.

One thing is clear: the Coyotes will not remain in Glendale. Phelps wants a deal richer than the $500,000 the team currently pays in annual rent, but the city manager said he is more focused on the value the Coyotes bring.

Once he realized Meruelo and Gutierrez were not interested in a long-term lease at Gila River, Phelps hired an economist to study the financial impact of the Coyotes on the arena.

He said the economist found that Coyotes crowds were so small that they generated only about $12,000 per game in sales-tax revenue at the arena and the Westgate Entertainment District, much less than a crowd for a concert. The city was told if it added 15 to 20 major concert dates per year it would replace the revenue generated by the 41 Coyotes home games in the regular season.

The average revenue per Arizona fan is $5, tied for lowest in the league with the Florida Panthers, according to Forbes. Compare that to the Edmonton Oilers, who have a league-leading $43 in revenue per fan.

Considering the Coyotes’ lease, which has Glendale paying all utilities costs plus operating costs and free rent for the team offices, Phelps said, “what we saw was financially it would actually be better for the City of Glendale not to have the Coyotes as a tenant.”

“They’re like a tenant in a commercial mall,” he said. “We wish them the best of luck but on June 30 we expect you to have all your belongings and boxes out of the house.”