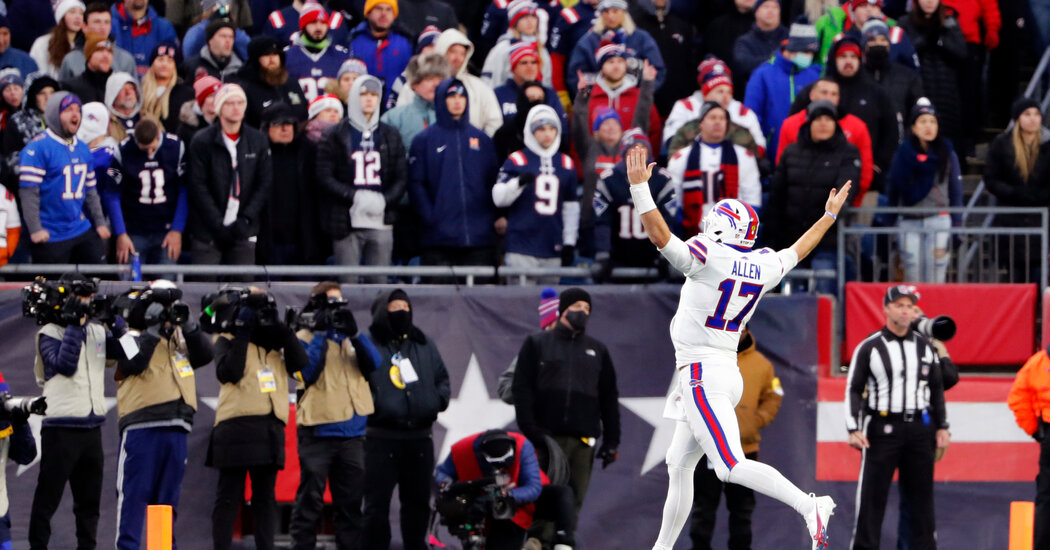 “Everything in his world,” Palmer said in early September, “is going to come down to that.”

The final score at Gillette Stadium — Buffalo 33, New England 21 — offered a quantifiable affirmation. Never trailing, the Bills stomped New England, avenging their defeat in Western New York three weeks ago amid tornadic squalls, for many reasons — a cohesive offensive line, an inspired day by the backup receiver Isaiah McKenzie, two interceptions by Micah Hyde — but none as prominent as this: The best player on the field Sunday was Allen, and he was all theirs.

“Josh makes a quarter of a billion dollars,” offensive tackle Dion Dawkins said. “Josh is worth every penny.”

The lucrative six-year contract extension Allen signed in August heaped upon him — and the Bills — a definite set of expectations, namely that he, and they, would at least duplicate, if not surpass, their performance from last season, when they reached their first conference championship game in three decades. To propel them closer toward a return, Allen positioned Buffalo for a second consecutive A.F.C. East crown by throwing for 314 yards and three touchdowns without an interception and by running for another 64. The Bills never punted.

Excluding their game-ending victory formation, the Bills (9-6) scored on all three second-half possessions. The final touchdown capped a masterpiece of a drive, Buffalo’s fifth of at least 61 yards, and it featured Allen at his finest.

After New England (9-6) drew to within 26-21 with 7 minutes 37 seconds remaining, on Damien Harris’s third touchdown run of the game, Allen huddled with his offense. The imperative, Allen said, was to score points no matter what. He connected with McKenzie — who finished with 11 receptions for 125 yards and a touchdown — in nearly identical passing plays, converting a third-and-10 and then getting another first down, before later facing a fourth-and-1 at the New England 34-yard line.

To win on Sunday would demand a certain kind of style, aggressive and unforgiving, and both coaches knew it. New England’s Bill Belichick, one of the more conservative coaches all season, went for it six times on fourth down, converting five. Buffalo’s Sean McDermott went for it four times, converting three.

On the last one, on that fourth-and-1, Allen dodged a defender by the line of scrimmage, cut inside and gained 8 yards. He completed another third-and-10 pass, evading the rush to flip the ball to Stefon Diggs, before two plays later finding Dawson Knox for the 2-yard touchdown that secured victory, reasserted Buffalo as a contender, and pushed them into the No. 4 seed in the crowded A.F.C. If the Bills can win their final two games, at home against Atlanta and the Jets, they will win the A.F.C. East again.

Especially for the Patriots’ defense. Over their seven-game winning streak that expired last Saturday night in Indianapolis, they had allowed a total of 73 points. They have yielded 60 the last two weeks, bullied first by the Colts and then by a Buffalo offense that overcame the virus-related absences of two top receivers, Cole Beasley and Gabriel Davis, and a shuffled offensive line that fielded only one Week 1 starter. The Patriots could have all but clinched the division Sunday with a win. Instead, they all but lost a chance to host a home playoff game, doomed by their inability to hem Allen in the pocket, to prevent him from extending plays or scrambling.

“It’s too late in the season to not play your best football,” Patriots safety Devin McCourty said.

All week, the Patriots, who dropped to the No. 6 seed, shunned the past — their sloppiness against Indianapolis, their Week 13 dominance against Buffalo — but they could not escape their present. Their rookie quarterback, Mac Jones, misfired high, far and behind, finishing 14 for 32 for 145 yards and two interceptions. They committed two pivotal first-half penalties, including an encroachment on Christian Barmore that turned Buffalo’s fourth-and-7 into a more manageable situation. Needing 2 yards, Allen got 23, on a pass to Diggs, then found him again three plays later, zinging an 11-yard touchdown that extended Buffalo’s lead to 17-7.

When the teams ran off the field at halftime, the home crowd booed. It booed long and hard, in part because it, quite possibly, expected an outcome similar to what unspooled just 20 days earlier, a 14-10 New England victory known everywhere from Walpole to Wenham as the Three-Pass Game. That’s how many times Jones threw, and needed to throw.

This time, for the rematch, goal posts didn’t sway and passes didn’t flutter and the winds evoked gentle breezes instead of swirling gusts. The conditions in what amounted to an unofficial A.F.C. East championship game stripped away the inclement variables that defined their last meeting, rendering football at its most elemental: The superior team Sunday would win.

And that’s what happened, with one addendum. The superior team with the superior quarterback.