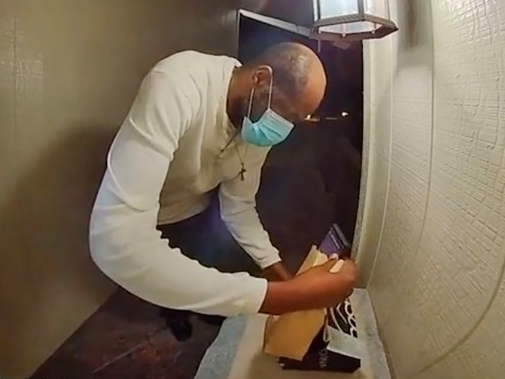 One Uber Eats driver went above and beyond with one of his recent deliveries and the customer set out to find out the identity of the person who made her day.

Tracey Ramirez recently ordered food via UberEats and the man delivered more than her meal.

He first laid out some tissue paper before putting down her bag of food, but he also included a goody bag filled with candy and a face mask, a handwritten note and poem. Um, we’re not crying, you’re crying.

Ramirez was determined to return the kind, thoughtful gesture, so she turned to TikTok to share the footage from his delivery with the hashtag “helpmefindhim.

The sweet video, which has been viewed 1.5 million times and has 290,000 likes, was the first in a series of her attempts to not only identify the driver but actually find him and speak to him.

Her first attempt – calling up Uber Eats and simply asking his name — did not work out as the company would not release his information.

“He did such an amazing job I really think he deserves all the recognition and I didn’t get a chance to thank him,” she said to the Uber Eats contact, but they still refused.

She eventually reached out to the restaurant from where she ordered her food — and they remembered him.

The driver’s name is Donald Anthony Jackson, so if you’re in the Dallas area, remember that.

He and Ramirez were able to chat, all of which can be seen/heard on her TikTok.

Ramirez launched a GoFundMe page to reciprocate his kindness, sharing the link in one of her videos captioned, “Let’s bless this man.”

Ramirez revealed that she will be meeting with Jackson this weekend to “surprise him with all of y’all’s love/tips.”