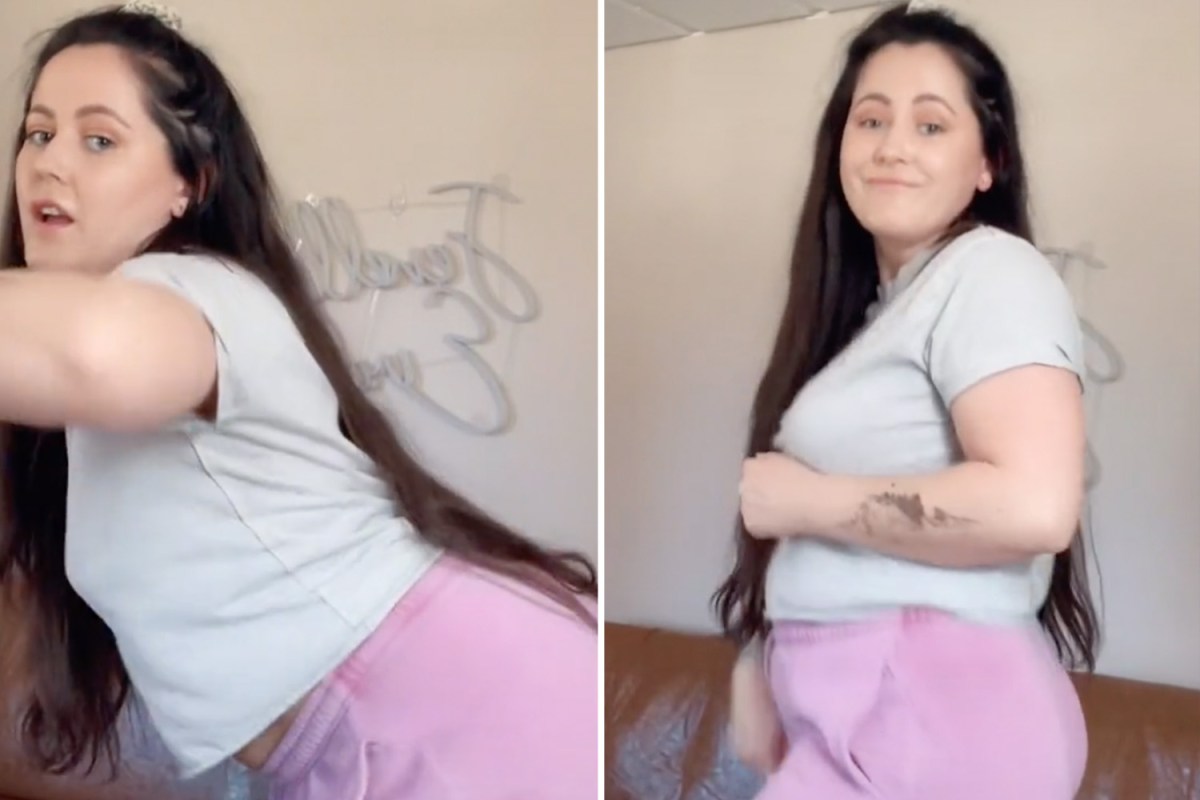 JENELLE Evans twerked in a newly posted TikTok video, seemingly brushing off an earlier comment from a troll calling her “irrelevant”.

The controversial reality star is no stranger to twerking online or controversy.

On Tuesday, Jenelle shared a video of herself twerking and dancing.

She shook and shimmied in pink sweat pants and a white crop top.

The former reality star wore her curly hair down her back with a small portion of her hair in a ponytail on top of her head.

She occasionally mouthed the words to the song that played over the clip.

There were several critics in the comments.

The former Teen Mom star hit back: “Your content is embarrassing, oh wait you don’t have any.”

Other critics commented “yikes” and “I thought you had all these injuries.”

There were plenty of supporters, too.

Fans commented “pretty” and “Dude your hair is epic.”

“Your dress style is exactly the same as mine. Comfy cozy all day long,” another wrote.

Jenelle replied: “Yeah I work from home so I don’t dress up unless I go somewhere.”

Noting the increased positivity in the comments, one follower wrote: “These comments pass the vibe check.”

The North Carolina native recently faced backlash from a trolls on another TikTok video.

She didn’t back down from the backlash, however.

Instead, she hit back.

After a hater commented on one of her earlier posts, “Teen Mom is over, why is she still trying to be relevant?” Jenelle took aim.

She shared a video looking directly into the camera as she lip synced to a sound circulating on the app.

“You’ve reached your limit on talking,” the recording said. “Shut the f**k up.”

MTV said in a statement: “MTV ended its relationship with David Eason over a year ago in February 2018 and has not filmed any new episodes of Teen Mom 2 with him since.

“Additionally, we have stopped filming with Jenelle Eason as of April 6, 2019 and have no plans to cover her story in the upcoming season.”

Both continue to appear in the spotlight – often for the wrong reasons.

The couple shared footage of them stuffing a chicken with vegetables.

Jenelle is often criticized for her “messy” kitchen and equally messy food choices along with David, but fans couldn’t hold back this time.

A Reddit thread saw many disgusted users express their anger over David’s creation, with many confused about what the meal even was.

“I’m calling the f*****ng police this is the last da*n straw,” one Reddit user wrote, capturing the overall mood.

“Literally made me a little nauseous. Wtf,” wrote another.

“Barb is going to stop buying them groceries if they’re just going to waste it…” wrote a third, referencing Jenelle’s mom Barbara who was regularly seen face-in-palm when her daughter was on the show.

“That’s going to take an insane amount of time to be fully cooked and then it’ll probably be burnt on the outside and still slimy on the inside,” worte a fourth.

“Also beans, a notorious veggie that needs to be cooked for a long time. Those teeth are going to love that mush.”

A fifth piled on: “I just came here to post this. Green beans??? Carrots? Unidentifiable brown slop? They have to be trolling us at this point.”