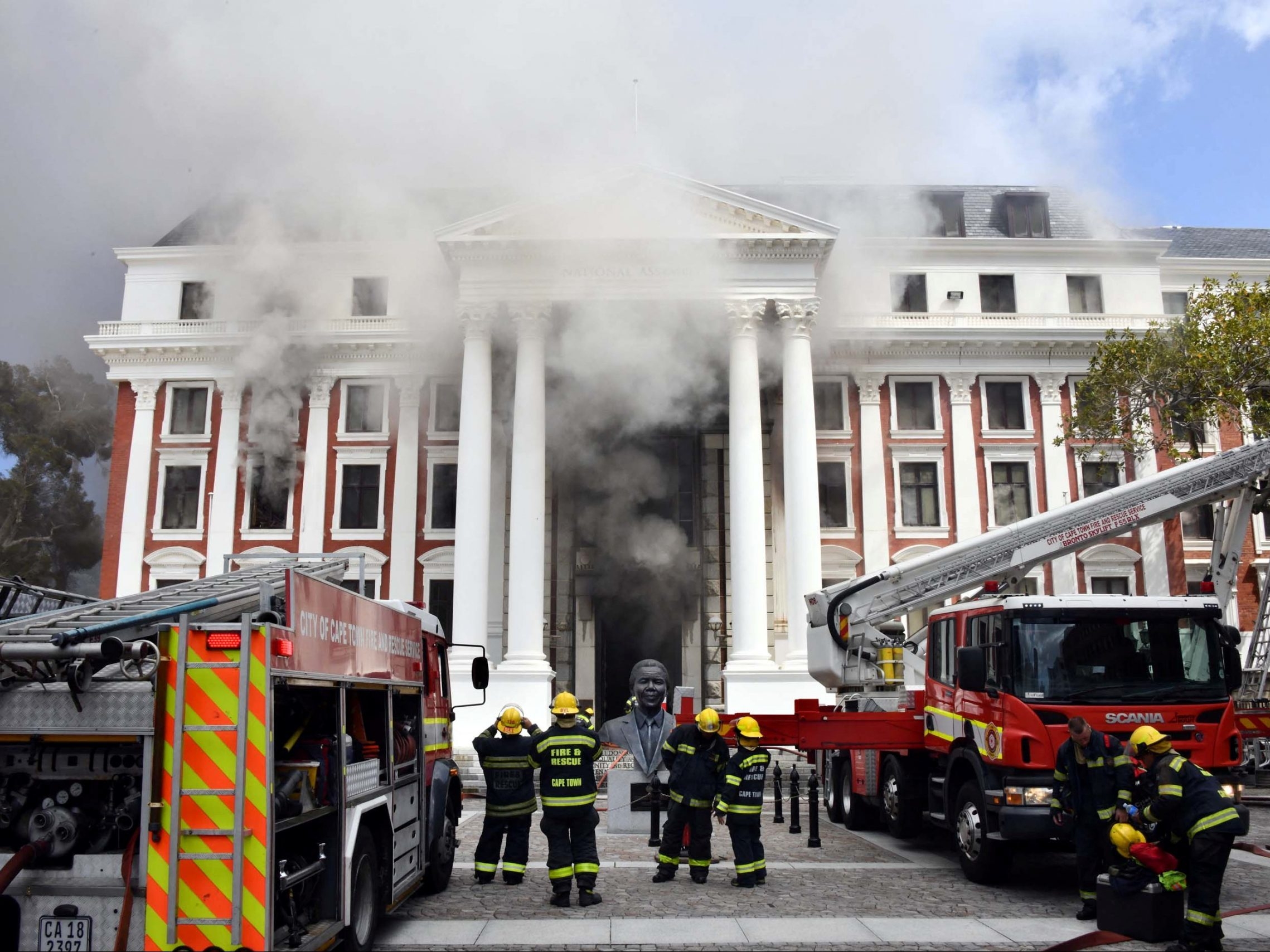 CAPE TOWN — A fire at the South African parliament caused extensive damage on Sunday, collapsing the roof and gutting an entire floor in one building and a man in his 50s was arrested in connection with the blaze.

The fire broke out in the early morning and authorities said the sprinkler system appeared to have been tampered with and so did not work. By afternoon, firefighters were still trying to contain the blaze in one of the several buildings that make up the parliament complex in the legislative capital, Cape Town.

A person was arrested inside parliament, Public Works and Infrastructure Minister Patricia De Lille told reporters, adding that the case had been handed over to an elite police unit called the Hawks.

“It’s the role of the Hawks to investigate any attack on political institutions,” De Lille said.

Parliament said in a statement the suspect was a man in his 50s.

There were no reports of any injuries.

The cause of the blaze was not yet known but De Lille said that according to a report that she received, a standard maintenance fire drill had been conducted just before parliament closed for the Christmas and New Year holidays and everything including the sprinklers was working.

“What was discovered this morning is that somebody has closed one of the valves and so then there was no water to trigger that automatic sprinkler system coming on,” De Lille said, adding that CCTV footage confirmed that somebody was in the building from the early hours of the morning.

President Cyril Ramaphosa told reporters after visiting the site that parliament’s work would continue despite the blaze. He also praised firefighters for saving a “very important national asset of our government.”

The parliamentary complex, some of which dates back to 1884, consists of a cluster of buildings. The National Assembly, or lower House of Parliament, is situated in what is known as the New Wing.

The upper house, or National Council of Provinces (NCOP), is located in what is called the Old Wing or Old Assembly, which is also used for committee meetings.

“The fire has been contained in the Old Wing. Firefighters are currently trying to control the fire in the New Wing, where the fire has affected the National Assembly Chamber,” parliament said in a statement.

Jean-Pierre Smith, a Cape Town mayoral committee member responsible for safety and security, said the roof of the old building had collapsed, and added the fire had gutted the third floor of the building, including office space and the gymnasium.

He also told reporters that the parliament’s fire alarm only rang when firefighters were already on site.

By afternoon smoke had partially subsided after billowing for hours from the roof and entrance of the National Assembly. But City of Cape Town fire services chief Jermaine Carelse said the fire was still active, and was now concentrated on the first and third floor.

The fire, which started just before 6 a.m., was the second at the parliament in less than a year. In March there was a blaze caused by an electrical fault.

“It is egregious that such a thing happened in the first place, there must be no question about it. Whether it was a result of security breaches, which may be apparent to some people, we don’t know,” Deputy Speaker of the National Assembly Lechesa Tsenoli said.

National Assembly Speaker Nosiviwe Mapisa-Nqakula told reporters that Ramaphosa’s state of the nation address to a joint session of parliament would go ahead as planned on Feb.10 but an alternative venue would have to be used.