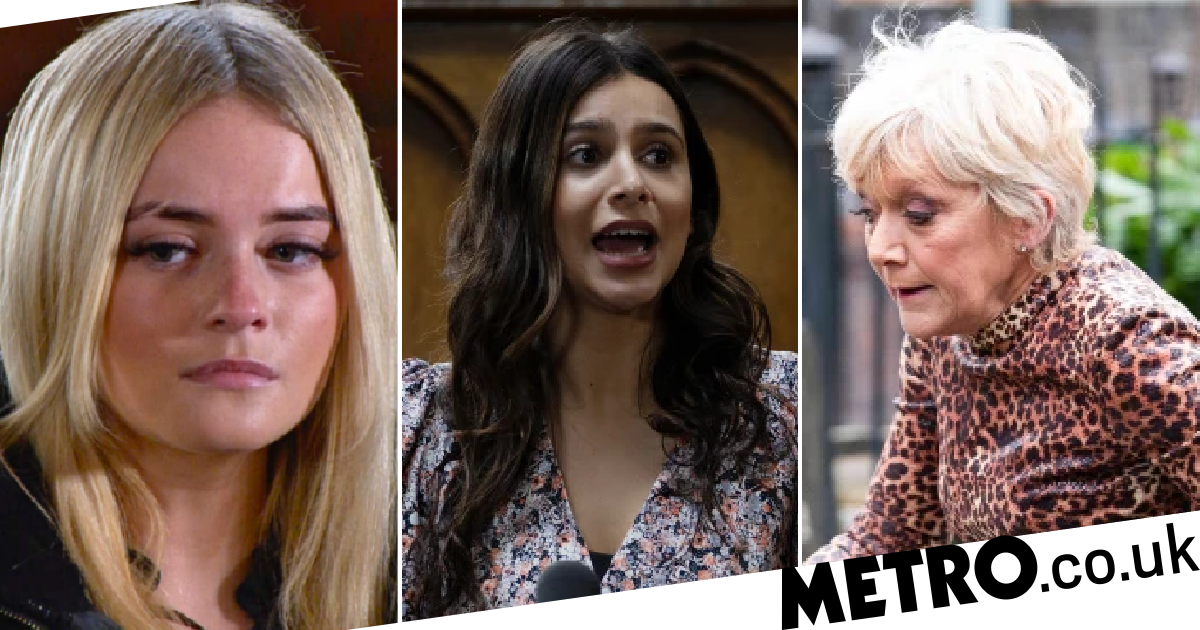 It’s shaping up to be a week in soapland that will live on in our memories for a long time, as the trial of the century commences.

We are, of course, referring to Meena Jutla’s big trial in Emmerdale, which sees the killer take drastic action in a bid to secure her freedom.

Coronation Street’s Kelly Neelan struggles to come to terms with the death of mum Laura, all the while processing the fact that she’s set to inherit everything from dad Rick.

Jean Slater proposes to Harvey Monroe in EastEnders, while Hollyoaks sees Warren Fox accidentally endanger the lives of his twins.

It’s going to be an eventful week in soapland, and if you’d like to know all there is to know about what’s coming up, Metro.co.uk has selected 10 must-see moments for you.

Kelly does her best to come to terms with her mum’s death, but she’s soon overwhelmed as she discovers that she stands to inherit everything from her dad, including the family home! She asks Gary to go and check on the house for her. Gary does just that, and is confronted with a photo of a smiling Rick. He packs up some belongings to bring back to Kelly, but Kelly is soon overcome with emotion and hurries out.  Alone in Victoria Garden, she takes out Laura’s little bottle of morphine from her pocket and unscrews the top – just as Abi arrives!

Ben has some concerns in EastEnders

Ben struggles to hide his concerns when Callum reveals that his work would like him to be the face of a new campaign aimed at the LGBTQ+ community. When Kathy’s new bar manager, Lewis, supports the idea, Ben gives Callum his blessing. Callum, however, soon picks up on Ben’s unease about the campaign, and Ben is later left shaken by a loud noise at the club, struggling following Callum’s attack.

Meena’s trial kicks off in Emmerdale

Meena enters the courtroom, basking in the spotlight. Liam is finally ready to testify but is thrown off-guard by Meena’s faux – meekness.

Warren and Sienna’s kids are in danger in Hollyoaks

Warren is tasked with looking after Sophie and Sebastian. Sienna, however, has no clue that he’s struggling with the strength of his new pills. Things soon take a worrying turn as, while in charge of the twins, Warren passes out. With a pizza in the oven, a fire soon breaks out, and Warren is forced to act quickly in a bid to save the lives of his children by getting them out of the flat.

Mrs Crawshaw makes a pass at Daniel in Coronation Street

An upset Mrs Crawshaw confides in Daniel, explaining that her husband has left her. Daniel offers to take over the planning of the trip to Edinburgh and is pleased when Nicky offers to help. Mrs Crawshaw later calls at Daniel’s flat waving a bottle of wine, and she insists that he call her Orla! How will Daniel deal with his boss making a pass at him?

Jean proposes to Harvey in EastEnders

Jean tumbles out of a limo after a night out. Martin takes her back to Sharon’s and she talks about her night out with a stag do. Stacey arrives and informs Jean that she’s got a doctor’s appointment this Friday, but a furious Jean storms off. Harvey, meanwhile, insists it’s the end of their relationship. Outside, Jean notices the groom from the stag do getting married and he lets her catch the bouquet, awkwardly trying to get rid of her. Happier than ever, Jean surprises Harvey and proposes.

Manpreet is determined to destroy her sister in court, and she refuses to let Meena’s performance rattle her as she takes the stand. The defence delves deep into Manpreet’s past and attempts to portray her as a seasoned liar. Manpreet’s infuriated to see Meena relish in her misery, but Meena is soon dealt a blow when she’s advised against taking the stand! The killer refuses to lose her chance to perform, and thus rehearses her lines in her cell.Meena is utterly convincing as she takes the stand in court, playing the part of a victim.

Liberty’s efforts pay off, as she discovers that her soap concept is a bestseller. The question is: is it for the right reasons?

A smitten Sam admits to Hope and Roy that he likes his new chess opponent, Jalena. Roy suggests that Sam talk to his dad about matters of the heart. Nick is chuffed to help out and gives Sam some fatherly advice.

Sharon begs Kat to keep Ben away from Phil’s businesses – he’s too fragile right now – but she doesn’t listen. She therefore goes behind Kat’s back and visits Phil, telling him everything and suggesting he revisit DCI Keeble’s offer, but Phil refuses.