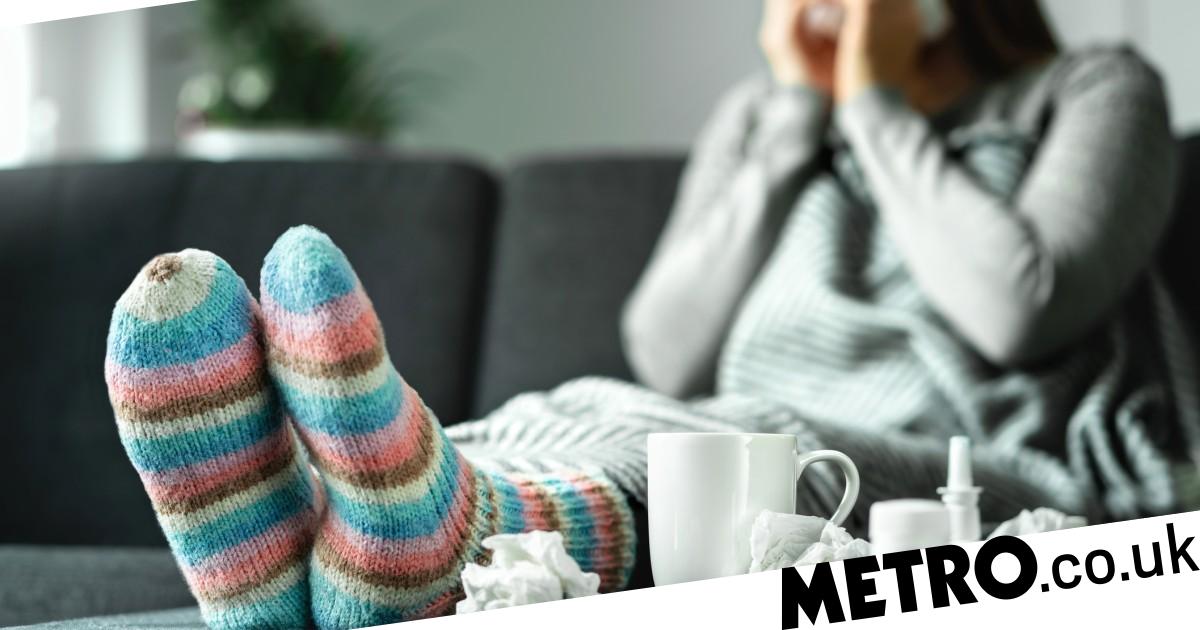 As we return to pre-lockdown levels of social mixing, colds are starting to become all too common.

A TikTok video has gone viral involving putting garlic up your nose as a cold cure, just one in a long line of claimed treatments or cures.

We asked two experts to examine some commonly held beliefs around colds.

1. Can you get a cold by getting cold?

Colds become more common in winter. Like other upper respiratory tract infections (in the nose, throat and windpipe) they are normally caused by a virus.

There might be a little truth in the idea that getting cold can give you a cold, because as the temperature changes this can alter the lining of our throat and windpipe, which can possibly make it easier for viruses to infect cells.

However, the main reason we get more colds in winter is spending more time inside, closer to other people – the perfect environment to transmit viruses.

2. Does sticking garlic up your nose help?

The TikTok trend involves putting cloves of garlic up your nose because it claims to act as a decongestant. Sticking something up your nose blocks the flow of mucus, so when it is removed, the flow starts and the mucus drips or even runs out of your nose.

Mucus not only helps trap and remove pathogens including viruses, but also contains antibodies and can reduce how infectious and spreadable viruses are. So this is not a good idea.

Garlic contains a range of compounds which might irritate the nose, and remember sticking anything up your nose isn’t a great idea. It could damage the lining and lead to bleeding or even get stuck. So it doesn’t really help and could be harmful.

Various herbal remedies claim to either prevent or speed up recovery from a cold. People often mention echinacea, a family of plants that grow in North America.

Some trials have suggested a small preventative effect, but the evidence does not show statistically significant reductions in illness levels. Turmeric is also touted as a preventative medicine, but there is no robust evidence for its effectiveness either.

Nobel prize-winning scientist Linus Pauling suggested that vitamin C in high doses could be an effective treatment for many viral infections.

But a Cochrane review, a very robust system in which researchers assess evidence, found that vitamin C did not prevent colds, but may reduce their duration, in some people.

As vitamin C supplements of around 200mg per day are considered low risk, some suggest this is a reasonable strategy to shorten the effects of a cold.

Vitamin D has moved from being the sunshine vitamin associated with healthy bones, to being linked to reducing the risks around everything from heart disease and diabetes to viruses. This has included a lot of interest in vitamin D as a way of helping us fight off flu and more recently Covid-19.

Laboratory experiments show that vitamin D is important in supporting immunity and this is critical in fighting off viruses. The problem may be that some people have inadequate vitamin D levels.

Sunshine allows us to make our own vitamin D — but that happens less in winter. So it is likely that taking vitamin D supplements as advised by the UK government over winter is sensible so that you get enough, and this may help prevent you from getting a cold.

6. What about chicken soup?

Chicken soup has been used through the ages to treat colds, and like honey it might have some benefits in managing symptoms. But it is unlikely to make a big impact on driving out the infection.

The water in the soup will help with hydration, which is a often a problem when we have a cold. Like most hot drinks it can help to relieve painful sinuses. There are studies looking at the effect on our immune system cells, but the evidence from these is far from conclusive.

Sadly, there are no miracle cures for the common cold. Some suggestions may be helpful, and are generally not harmful, such as getting enough vitamin C and D. But others are definitely not worth trying and could be risky, such as putting garlic up your nose. The best thing to do is get plenty of rest and drink plenty of fluids to stay hydrated.

By Duane Mellor, lead for evidence-based medicine and nutrition, Aston Medical School, and James Brown, associate professor in biology and biomedical science, both at Aston University

Click here to read the original article on The Conversation


MORE : Can you have the flu jab if you have a cold?

How to get your Metro newspaper fix

Metro newspaper is still available for you to pick up every weekday morning or you can download our app for all your favourite news, features, puzzles… and the exclusive evening edition!