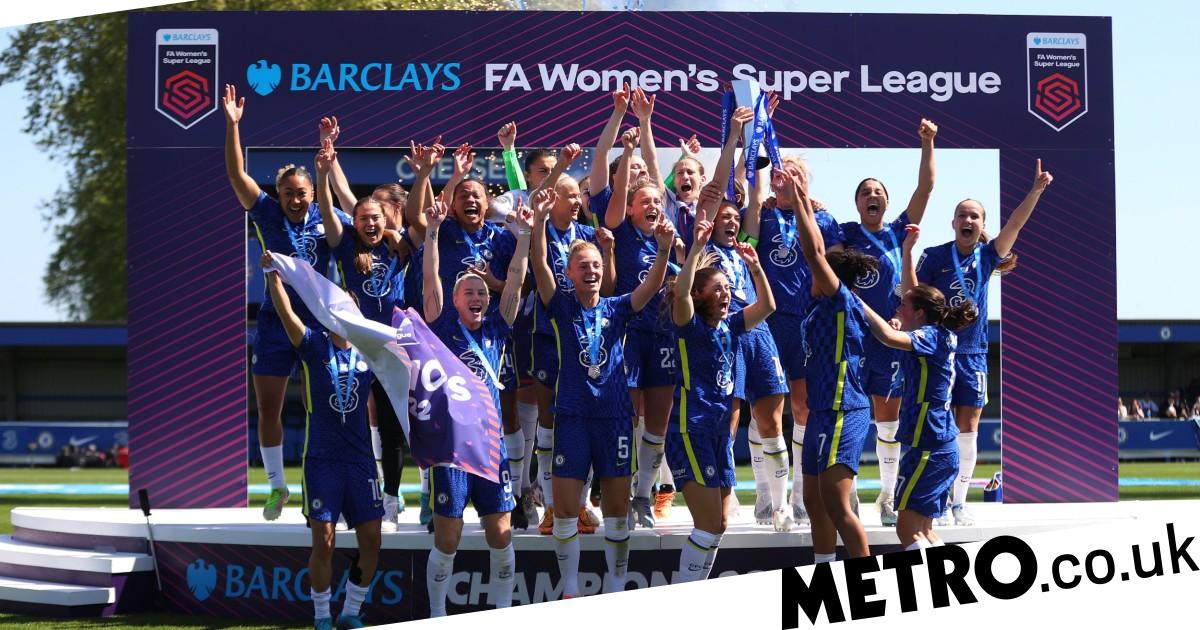 Emma Hayes’ side led Arsenal by a point ahead of their final fixture against Manchester United at Kingsmeadow and were given an early scare as Martha Thomas gave the visitors an early lead.

Chelsea started the second half with much more purpose and Kerr quickly pulled the hosts level with an excellent volley on the edge of United’s area.

Guro Reiten then capped a fine move in the 51st minute to give Chelsea the lead for the first time in the game.

But Kerr capped another fine season with a stunning goal as she caught out United goalkeeper Mary Earps with a brilliant turn and volley from 25 yards out.

‘In the first half I thought we were a bit nervous,’ Kerr told Sky Sports after the game.

‘I definitely felt nervous. In the second half it was just about playing how we play. That’s why we’re champions, when we play like that no-one can stop us.’

Chelsea fans were also given the chance to bid farewell to Drew Spence, who was brought on as a late substitute and will be leaving the club this summer after making 239 appearances.

Chelsea now have the chance to make it a league and cup double for the second season running as they face Manchester City in the FA Cup final next Sunday.

Arsenal, meanwhile, were forced to settle for the runners-up spot in the WSL as second-half goals from Stina Blackstenius and Stephanie Catley sealed a 2-0 win over West Ham.

Speaking after the game, their leading striker Vivianne Miedema, who has scored 110 goals in 121 appearances for the Gunners, admitted her future at the club remains undecided.

‘Not really anything to be honest. I was focused on today. I will have a couple of weeks holiday and will make a decision then,’ Miedema told BBC Two.

‘I’m speaking with the club and Jonas Eidevall. I really want to win titles. This year I haven’t won anything.

‘If I feel like the club is moving in that direction then maybe I stay another year or two years. Right now I have not made my decision.’