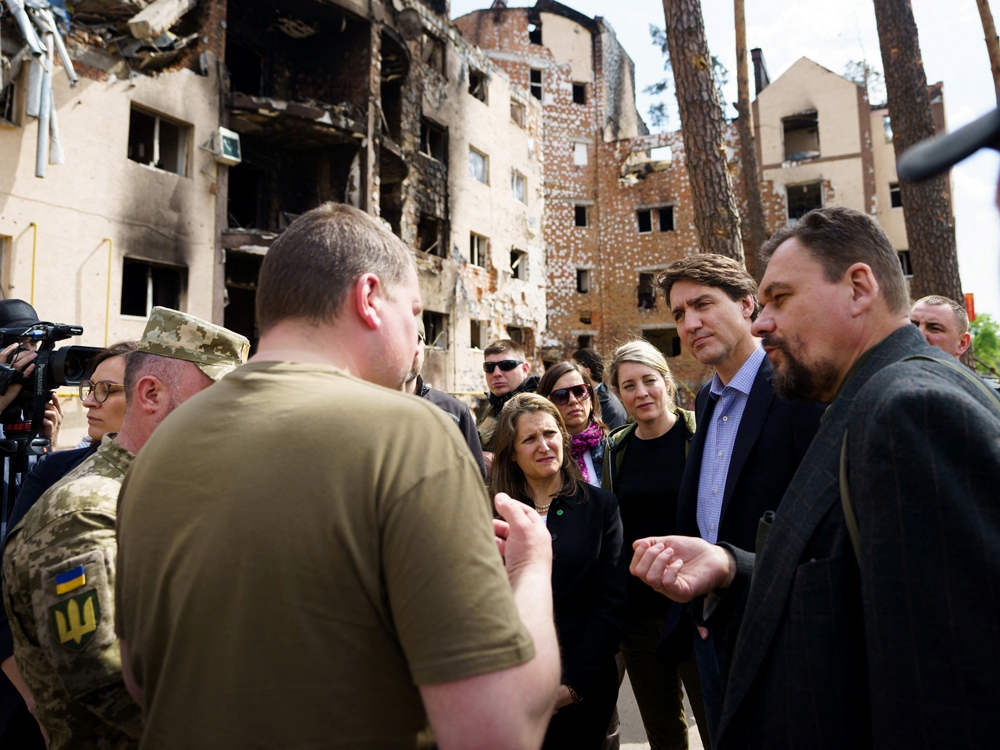 Joly visited Kyiv and Irpin on Sunday with Prime Minister Justin Trudeau during a surprise visit to Ukraine to reopen Canada’s embassy.

The foreign minister said she was told not to step off the sidewalk in Irpin because the Russians planted so many mines in the town, including around people’s homes, before troops retreated.

Joly said Irpin was strategically important to the Russians in their push to capture Kyiv. It is next to Bucha, where Russian atrocities directed at civilians are being investigated as war crimes.

She said 50,000 civilians were evacuated from Irpin, which was popular with young families before Russia invaded.

“Irpin is a city that could be compared to a suburb of Toronto or Montreal,” she said. “It is a city that is very much a place where first-time homebuyers go. Young families buy their first homes there, their first condo apartment, that is where they have their children. There are lots of playgrounds, usually lots of strollers.”

Even though Russian troops have left, she said it is still too dangerous for families with children from the Kyiv suburb to return until the mines are mapped, so they can be avoided, and then cleared.

The minister said Canada is skilled in mine clearance and is providing expertise to Ukraine, as well as $2 million in funding for the Halo Trust, which clears mines and explosives.

“We are specialists in demining,” she said. “We were the ones who created the international convention on landmines. We also have Canadian technology to deal with landmines. We have a lot of expertise.”

She said Canada is also supporting education about the danger of mines for Ukrainian adults and children.

During the visit with Joly and Deputy Prime Minister Chrystia Freeland, Trudeau reopened the Canadian Embassy in Kyiv and expressed unwavering support for the embattled country.

He met Volodymyr Zelenskyy in person for the first time since Russia invaded in late February, and announced $50 million in fresh Canadian military support for Ukraine, including drone cameras, satellite imagery, small arms and ammunition, as well as funding for demining.