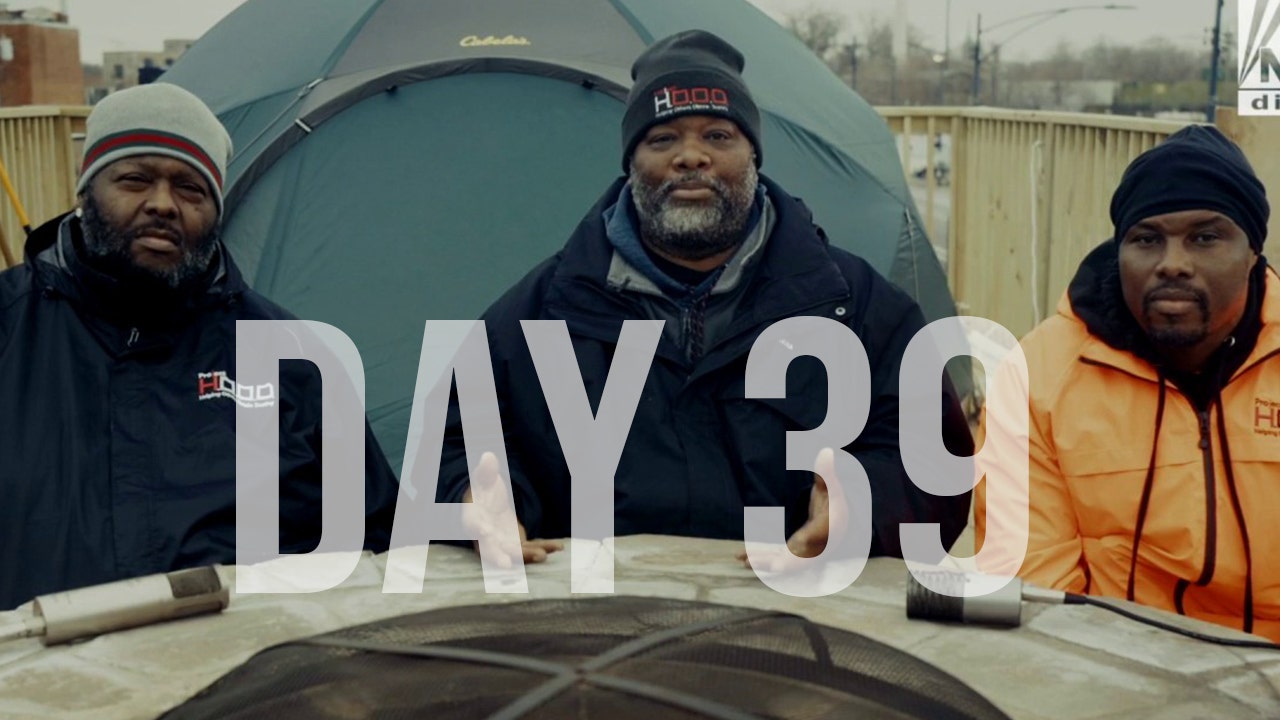 CHICAGO – On the 39th day of his 100-day rooftop vigil to raise money for a community center on the South Side of Chicago, Pastor Corey Brooks met with two former gangsters who were once destined to kill one another. Varney Voker ran the Black Disciples as one of its top bosses and ruled with ruthless business savvy. One block away, Lavondale Glass ran the rival Gangster Disciples with equal ruthlessness. Yet both men, by the grace of God or simple luck, avoided their deadly destiny when they met Brooks. He transformed them into citizens who now work for Project H.O.O.D. to repair the damage they caused their community.

However, this remarkable transformation did not come without a steep price for these two legendary street fighters who continue to be tested to this very day — sometimes beyond what most of us could endure.

When the pastor asked Glass, known on the streets as Big Dale, what it was like back in the day, he did not mince words.

Voker pointed out that most people don’t understand how close the conflict was all those years that he and Glass manned the streets.

“It was a one-block radius. I mean, one block. We was on 61st and Calumet, they was on 61st and Prairie,” Voker said. “Back in our days, even though we had conflict, we had violence taking place, we had structure. Let’s not skip that part.”

Everything that took place on the streets went through either Voker or Glass, and that maintained a certain sense of order and peace. For them, their world was far removed from today’s anarchic world of social media gang-banging where there is no sense of unity or structure. A mere social media posting can end in death.

“We called ourselves businessmen because we was about business. We was about making some money at the end of the day,” said Voker, who could make up to $7,000 a day in the drug trade. “If you broke that peace treaty, on his end or my end, you was going to the hospital because that was the structure back then.”

“Despite all the money we made, all the violence that we participated in, it still boils down to one thing: We messed up our community,” he said.

It was the pastor who helped both gangsters realize this truth. When Voker got out of the federal penitentiary several years ago, he was headed for the streets to rebuild his drug empire. However, the pastor, who took over the neighborhood during Voker’s absence, told him that there was “a new sheriff in town.” He presented Voker with a choice: repent and transform your life for the better or leave the neighborhood forever. Like Glass, Voker came to realize the profound damage that he had done to his neighborhood and repented.

The pastor then brought up a subject painful to both men: their sons.

“When you go down a certain track, a certain lifestyle, you end up bringing your kids into that lifestyle sometimes,” he said.

Voker nodded, revealing that somebody pulled up on his firstborn several years ago and shot him 30 times. One bullet severed his spine, paralyzing him from the chest down.

“I was just coming home from jail,” said Voker. “The city thought maybe that it was gonna be an uproar, but I took to social media because I wanted the world to know there would not be retaliation.”

Voker sat down with his son and helped him understand that retaliation only continues the killing and misery. Glass’s misfortune was far more recent. He lost his son this past Halloween to a gang-related dispute. He, too, swore that he would not retaliate. But his situation was different than Voker’s in that he had already joined the pastor’s church years ago and was working with Project H.O.O.D. to prevent retaliation killings. He could have easily betrayed his progress for the path of revenge, but he did not.

“We have to come to a common ground,” said Glass. “I said, enough is enough.”

Both of the former gangsters pointed out that they were born into the South Side when it was already corrupted and declining. Their elders led them astray into the gang world.

“We was raised up with a gun in a pack, you know what I’m saying? Our older guys, they misled us,” Voker said. “If I knew what I know now, I would have took a different route in life.”

Though both Voker and Glass began their lives as mortal enemies, they now work side by side as brothers as they try to right the wrongs of the South Side. Their Violence Impact Team, a vital part of the Project H.O.O.D. community center, has been credited for preventing as many as 50 retaliation killings a month — a stat never reported in the media.

“We on the line everyday, seven days a week, and the calls come out saying, ‘shots fired,’” Voker said. “If it’s two, three o’clock in the morning, we racing to get to these locations to try to see what’s going on. How can we be a help to the family? How can we prevent the next situation from taking place?”

It’s a risky and volatile world that Voker and Glass could walk away from anytime they choose. Instead, they choose to continue to put their lives on the line in the hopes of saving kids and their futures. Just like Brooks and Project H.O.O.D. saved theirs.

Eli Steele is a documentary filmmaker and writer. His latest film is “What Killed Michael Brown?” Twitter: @Hebro_Steele.