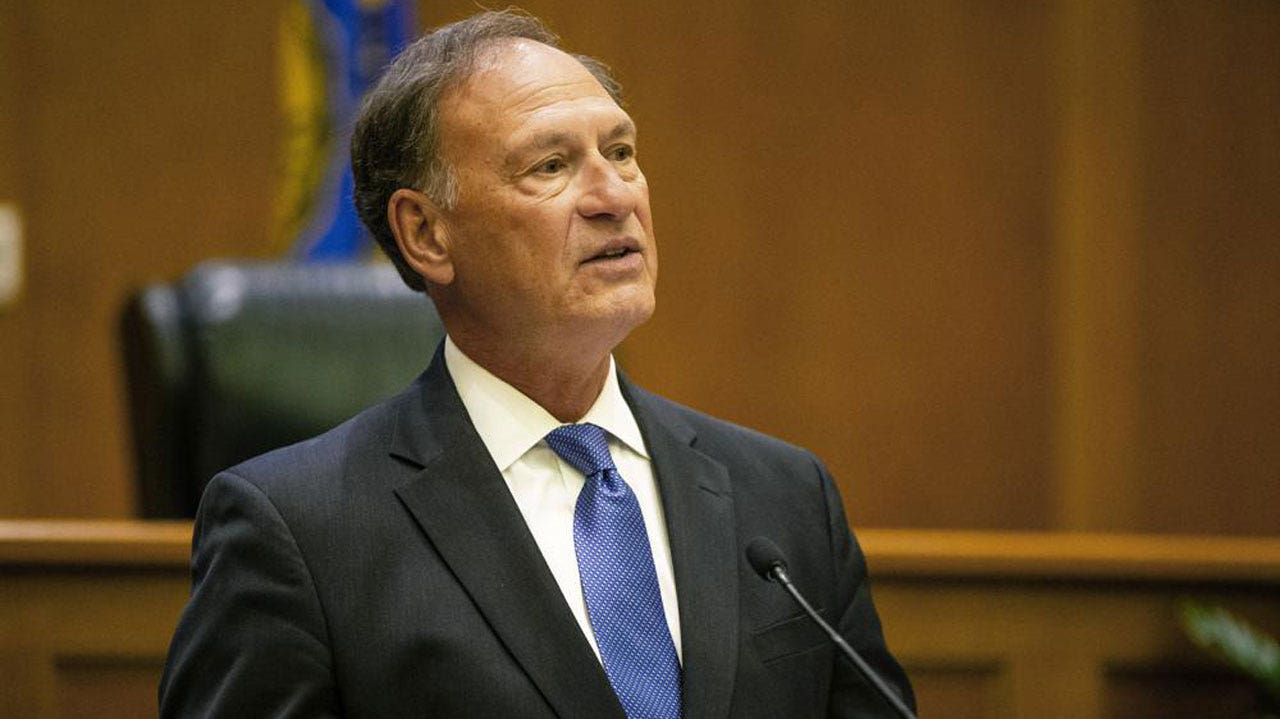 Alito spoke remotely from the Court building, addressing a crowd at the Antonin Scalia School of Law at George Mason University Thursday night. Both the Court and the justices have received ramped-up security amid protests following the draft’s release.

“I think it would just be really helpful for all of us to hear, personally, are you all doing ok in these very challenging times?” a questioner asked after Alito’s remarks, The Washington Post reported.

“This is a subject I told myself I wasn’t going to talk about today regarding, you know — given all the circumstances,” Alito replied.

GARLAND ALLOWING ‘MOB RULE’ IN US BY NOT PROSECUTING DEMONSTRATORS AT JUSTICES HOMES, REPUBLICANS SAY

“The court right now, we had our conference this morning, we’re doing our work,” the justice added. “We’re taking new cases, we’re headed toward the end of the term, which is always a frenetic time as we get our opinions out.”

The conference Thursday represented the first time the Court had gathered after the leak of the draft opinion and after Chief Justice John Roberts opened an investigation into the leak.

Alito went over the Court’s schedule for finishing its work by the end of June or beginning of July, but the Post noted that he did not mention the repeated refrain that the justices disagree about the law but remain personally friendly.

“So that’s where we are,” he concluded.

Roberts confirmed last week that Justice Samuel Alito’s draft opinion in the case Dobbs v. Jackson Women’s Health Organization was genuine – although the draft dates back to February, and it does not represent the current or final opinion of the Court. In the draft, Alito strikes down Roe v. Wade, which struck down state laws across the country, and allows states to again make their own laws on abortion.

In the wake of the historic leak, pro-choice protesters have targeted the homes of Supreme Court justices, with a massive demonstration in front of Alito’s home Monday evening. They have also repeatedly targeted the homes of Justices Brett Kavanaugh and Amy Coney Barrett. Some have even protested outside Roberts’ residence, although the chief justice reportedly does not support overturning Roe.

Protesters have also picketed the home of House Speaker Nancy Pelosi, D-Calif., who has a 100% rating with the pro-choice activist group NARAL Pro-Choice America.

Activists targeted Roman Catholic churches for protests last Sunday, and vandals targeted a church in Boulder, Colorado, last week, spray-painting “bans off our bodies” and “my body my choice” on the building.

In the speech, Alito ran through a detailed examination of statutory textualism and reiterated his disagreement with Justice Neil Gorsuch, who wrote the majority opinion in the case Bostock v. Clayton County (2020), in which the Court ruled that bans on discrimination on the basis of sex apply to discrimination on the grounds of gender identity.

Alito called Gorsuch a “colleague and friend,” saying he is happy to have him on the Court. Yet he reiterated his view that Gorsuch’s opinion is “in my view indefensible.” Alito noted that the concept of gender identity was unknown at the time Congress passed the Civil Rights Act of 1964, and that Congress would not have passed the law if legislators had known it would be interpreted this way. “It might not have gotten a single vote,” he said.