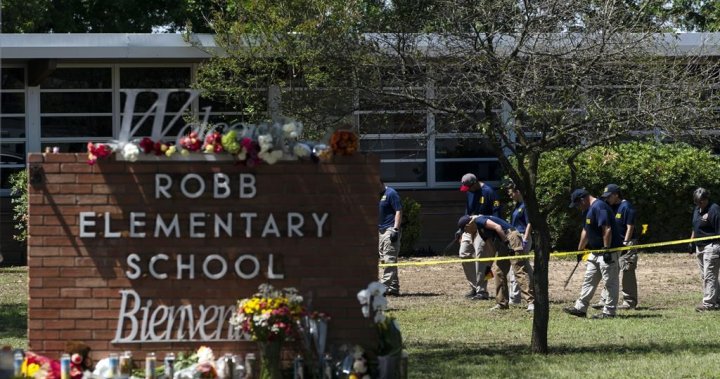 The elementary school in Uvalde, Texas, where 19 students and two faculty members were killed by a gunman last month will be demolished, the city’s mayor announced.

Uvalde shooting could have been stopped in 3 minutes; it took over an hour: Texas official

“My understanding — and I had this discussion with the superintendent — that school will be demolished,” McLaughlin said at the meeting.

“You can never ask a child to go back or a teacher to go back in that school ever,” he continued.

No official plans or timeline for the destruction of Robb Elementary School have been released yet.

At the city council meeting this week, McLaughlin also shared his frustrations about the difficulty in obtaining information from the authorities and agencies investigating the shooting in Uvalde. He claimed city officials were not receiving any updates.

“I’m very frustrated with the way they’re handling it. Very frustrated because, like I said, we’re not getting any information,” he said.

“The gloves are off,” he continued. “As we know it, we will share it.”

“What matters to Uvalde is that these broken-hearted families and this grieving community get a full investigation and accurate report of what happened that day,” McLaughlin said.

The Uvalde school massacre occurred on May 24 and has triggered intense scrutiny of local law enforcement, who took over an hour to breach the classroom door where the 18-year-old gunman was still actively shooting victims.

On Tuesday, Steve McCraw, director of the Texas Department of Public Safety, called the police response to the shooting an “abject failure.”

He told a Texas senate committee hearing that within three minutes of when the shooting began, there were enough police officers at the scene to stop the shooting.

“Three minutes after the subject entered the west building, there was a sufficient number of armed officers wearing body armour to isolate, distract and neutralize the subject,” McCraw said, as reported by the BBC.

“One hour, 14 minutes and eight seconds — that is how long the children waited, and the teachers waited, in Room 111 to be rescued.”

Robb Elementary will not be the first school to be razed because of a shooting.

In 2013, Sandy Hook Elementary School was demolished after a gunman killed 20 young students and six adults. The school was later rebuilt.

2:02
Thousands across the U.S. march to demand changes to gun laws