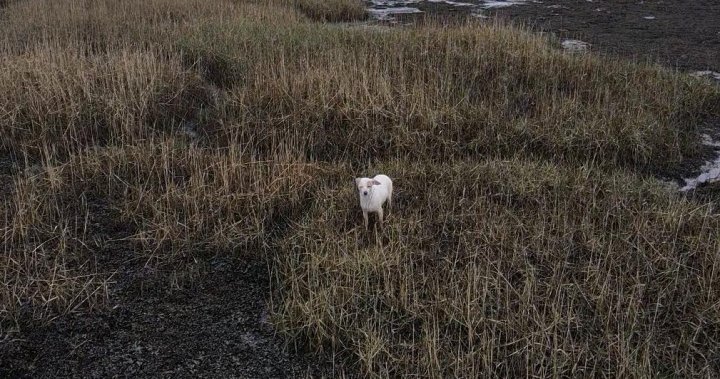 A drone company is being credited for saving the life of a dog in the U.K. after it came up with a clever way to capture the attention of the food-motivated pooch.

Millie, a three-year-old Jack Russell-whippet cross, went missing after she slipped out of her leash on Jan. 13 in Havan, Hampshire, while on a walk near the coast.

Millie was missing for a few hours, reports the BBC, before she was spotted nearby in an area of dangerous mudflats (muddy land left uncovered at low tide).

Denmead Drone Search & Rescue, a local volunteer organization that helps reunite owners with their pets, called the coast guard and together they followed Millie for about 100 metres on the coastline, before they lost sight of her and had to leave her for the night.

The group returned the next day, this time flanked by a fire and rescue team and police officers. It was another unsuccessful day of trying to coax the dog closer, but they vowed to keep up their mission.

On the third day, they returned to the marshy area and located Millie quickly. But the tide was starting to rise, and kayakers who went into the marshland were unable to get close enough to Millie to save her.

That’s when the idea struck – they decided to attach some sausage to a drone and fly it out, dangling it over Millie’s head. Organizers of the rescue told The Guardian that they had to check aviation regulations and the maximum takeoff weight for the drone. The rescuers calculated they could safely attach two ounces of sausage.

Sure enough, the smell of meat was very tempting to the dog, and they were able to lure Millie more than 300 metres into a safe area. Millie, saved from the rising tide and the likely fate of drowning, ate half the sausage and then proceeded to run away again.

This time, however, she didn’t head back to the mudflats. Rather, she took off to a nearby industrial area, where she was captured the next day.

“It was an unusual rescue — they aren’t normally this complicated,” Chris Taylor, a volunteer with the drone rescue group, told the BBC.

“It was very difficult to navigate the area. The drone was worth its weight in gold in this case.”

Millie’s owner, Emma Oakes, said her dog’s love of food is likely what saved her.

“Millie really likes food and she’ll eat anything you give her … raw carrots, cucumber – but she much prefers sausages. Meat is her favourite food, so dangling a sausage was probably the best thing they could lure her with,” she told The Guardian.