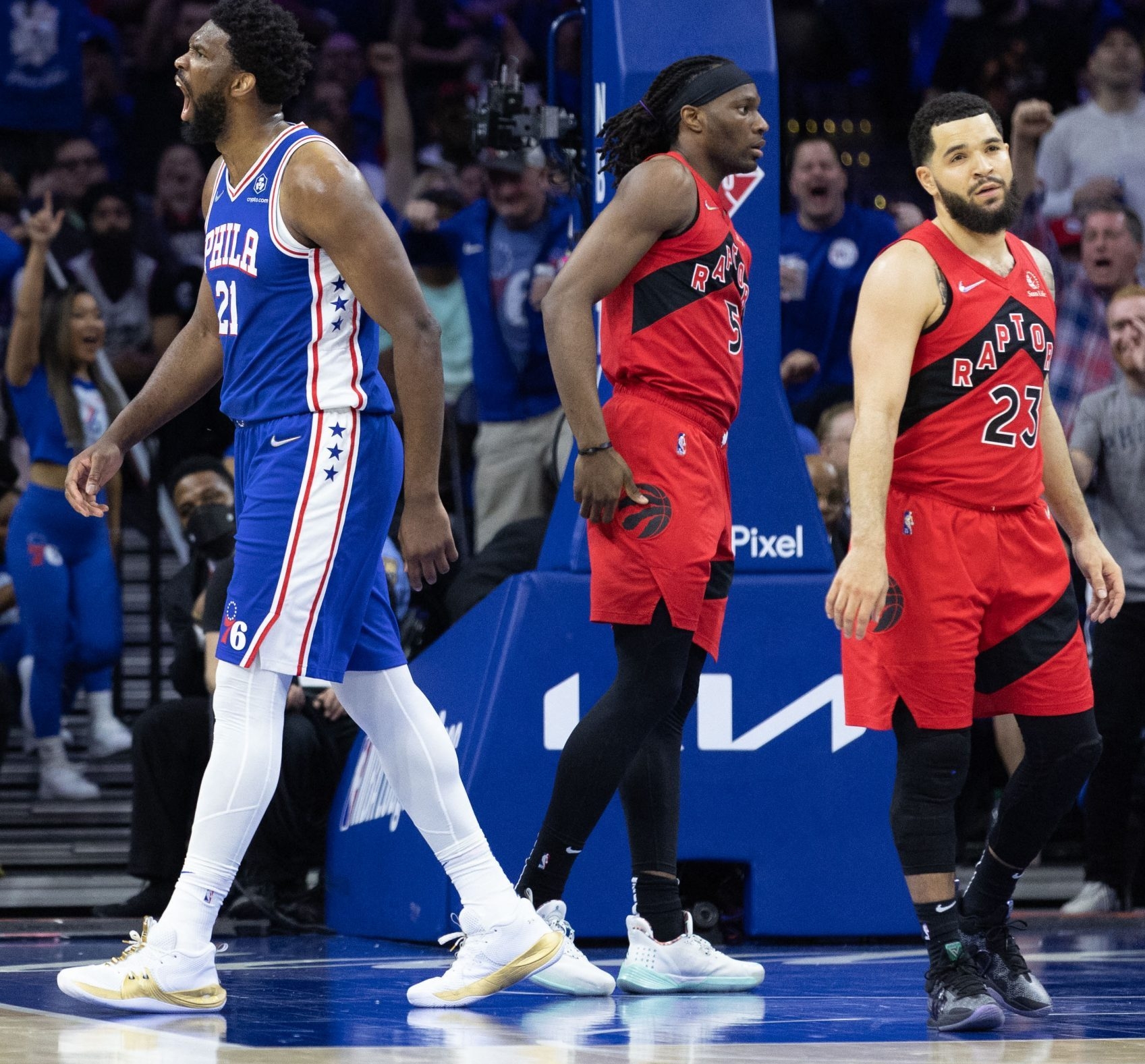 PHILADELPHIA — Joel Embiid was the Raptors focus coming into Game 1.

When it switched to a secondary focus on this Sixers’ team it was James Harden.

But in the opener of this best-of-seven Eastern Conference quarter-final it was Tyrese Maxey who did the most damage against the Raptors.

Well, Maxey and the Raptors themselves if you want to be totally accurate as the Sixers opened up with a dominant 131-111 victory.

Far worse than the Game 1 loss was the Raptors’ potential injury count coming out of the game.

Scottie Barnes, the Raptors Mr. Everything rookie had to be helped to the locker room with just over nine minutes remaining in the game.

Barnes was in a defensive posture when 280-pound behemoth Embiid came down on the arch of his left foot with all of that weight.

Barnes immediately hit the deck and grabbed at the foot in obvious pain. He needed help to get to the locker room.

The Raptors also lost veteran reserve Thad Young after the first half with a sprained left thumb and seemingly dodged another potential injury when Embiid’s elbow somehow missed Khem Birch’s nose and took him in the face instead knocking him temporarily silly.

Birch left the game but after clearing the concussion protocol returned.

All of that bad news managed to mask the bigger problem which was the Raptorsinability to do any of the things that made them successful this year.

It started with defence which was no where near the level it had been in the season’s final three weeks or had to get to in the opener of the playoffs.

The Raptors The quick-as-lightning point guard with the silky-smooth game from behind the arc torched the Raptors from every corner of the court.

Maxey was 5-for-8 from three and 14-for-21 from the field as he effectively used his speed advantage on just about every Raptor to turn the corner and get to the rim when he wasn’t draining them from long distance.He finished with 38.

His previous single game high in the NBA was 33 points and he was beyond that after three quarters.

With Maxey and perhaps a bigger surprise Tobias Harris handling scoring duties – Harris wound up with a Sixers second high 26 points – it was Embiid handling the rebounding duties with 15 and Harden leading the team in assists with 14.

Fred VanVleet had a tough night with the whistle picking up two early fouls, the first a real tickey-tack variety and then playing in foul trouble the rest of the night until he picked up his sixth and disqualifying on the same play that Barnes was hurt.

VanVleet did not go quietly picking up a tech on the way out as he let the officials know exactly what he thought of their performance on the way out.

The first half was a textbook class in every way the Raptors can lose they series.

Defensively they were horrible allowing the Sixers to shoot 50% from the field, 47% from three on their way to a 69-point first half.

To put that in context, the last time the Raptors gave up that many points in a half was their first game coming out of the All-star break in Charlotte when they gave up 70.

That was a real low point of the season for the Raptors and it came with OG Anunoby out and Fred VanVleet about to join him on the sidelines.

But the things the Raptors need to do to get their offensive game going weren’t there either.

The Raptors pulled down just two rebounds on the offensive boards, an area the team owned this year in just about every game they played.

Worse, the Sixers had eight of their own.

Possibly more shocking was the fact the Sixers did not commit or were forced into a single turnover.

Also not the recipe Toronto has used to enjoy success this season.

On the positive side from a Toronto perspective was the play of rookie Scottie Barnes, at least until he had to be helped back to the room with a sprained left ankle.

That period of acclimation most rookies require as they get their first taste of the playoffs wasn’t really necessary for the Raptor rookie.

Barnes got into the game early and looked as comfortable in the more physical playoff basketball as he had at any point in the regular season.

Barnes wasn’t just a bystander in the physicality, he was initiating some of it. Case in point was the flagrant foul 1 he picked up goring through a Maxey screen and knocking the speedy point guard into tomorrow.