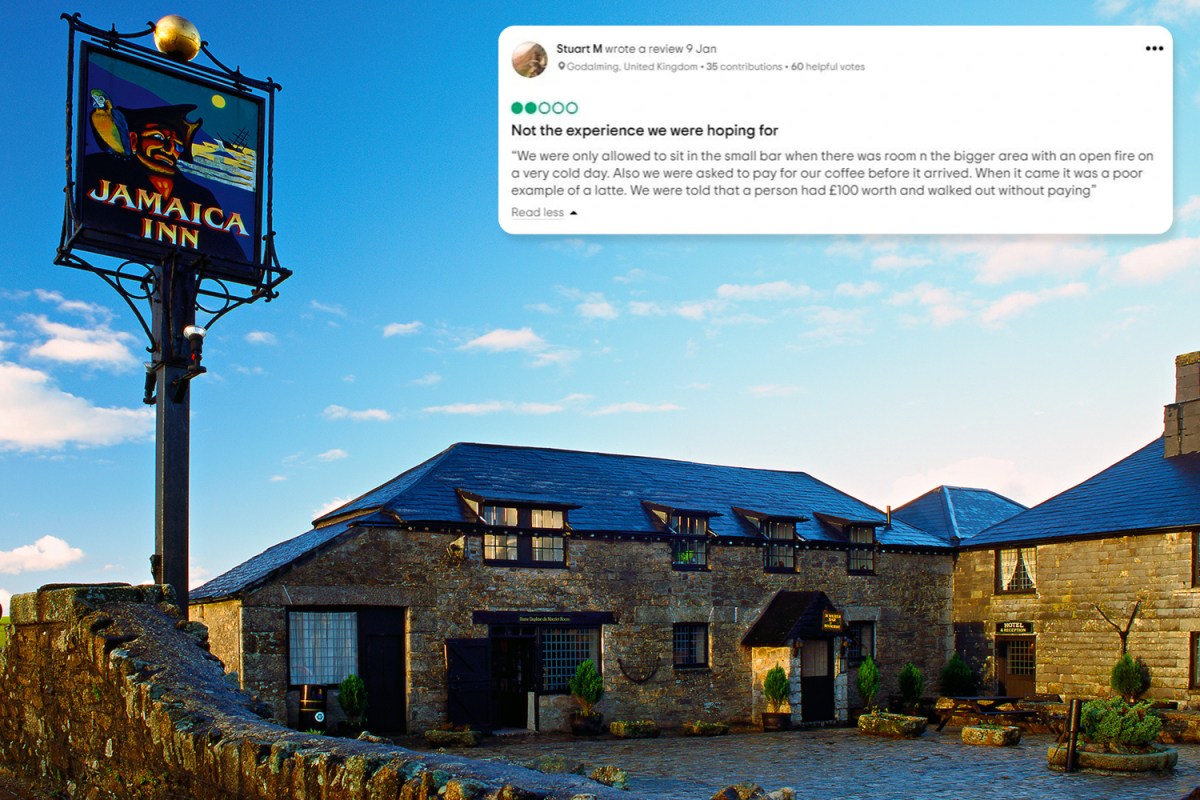 A PUB landlord has unleashed a BRUTAL response on a “spoilt” punter who complained about the taste of their coffee.

The owner of Cornwall’s iconic Jamaica Inn blasted Tripadvisor user Stuart M after he gave the establishment a two out of five rating.

He left the review on Sunday, saying his group didn’t enjoy the coffee and said they were told they could only sit in the bar area.

It read: “We were only allowed to sit in the small bar when there was room in the bigger area with an open fire on a very cold day.

“Also we were asked to pay for our coffee before it arrived. When it came it was a poor example of a latte.

“We were told that a person had £100 worth and walked out without paying.”

The owner of the Inn, Allen Jackson, was less than happy with the feedback and decided to explain himself in a very sassy way.

They said: “Unfortunately there would have been prior bookings with customers about to arrive for the tables in the main bar you had your beady eye on. There could have been no other reason.

“However, you seem peeved at not getting your own way and seemingly you imagined you were specially selected for relegation to Joss’s or Mary’s bar – both of which are very popular, by the way. This prompts me to wonder – were you spoilt as a child?

“We invite our customers to order and pay at the same time to reduce contact and Omicron transfer.

“This halves the visits to your table, halves the interaction between customers and staff and halves your chance of you getting Covid from my staff and vice versa.”

The landlord went on to speak about the Inn’s coffee – saying that there is nothing wrong with it and went so far as to insult the customer’s taste.

He wrote: “I am sorry the latte was not to your taste – it is ground fresh at the time of order and it must have been tens of thousands of cups ago when anyone else last complained about it.

“So long ago I cannot remember when, if ever, so maybe it’s your pallet (sic) that’s corrupted – just a thought.”

Mr Jackson is known for his dislike for Tripadvisor, and in the past called a reviewer a “dosser” and told her to go back to “whatever [she] crawls into at night”.

He continued: “You are masquerading as an overnight resident by wrongly placing your review in our ‘Accommodation’ listing instead of ‘Restaurant’ where it belongs and you mislead others by doing so.

“Obviously resident guests spend much more time with us and can therefore make far more informed assessments which is appreciated by others reading reviews and deciding whether to visit the Inn.

“I would not want them thinking your review is from one of these more informed and reliable guests as in reality you were here one minute and gone the next.

“You tossed a belated negative review at us on the way out the door, so to speak, based on your brief visit safe with Trip Advisor’s anonymity and total lack of accountability – ‘Stuart M’ you curiously call yourself.

“Incidentally, we get even more top 4 and 5 star reviews from overnight guests than we get from brief visitors like yourself which is rather telling.”

Jamaica Inn is well known as the setting for Daphne du Maurier’s novel of the same name, published in 1936.

It dates from 1750, when its remote Bodmin Moor location attracted smugglers.