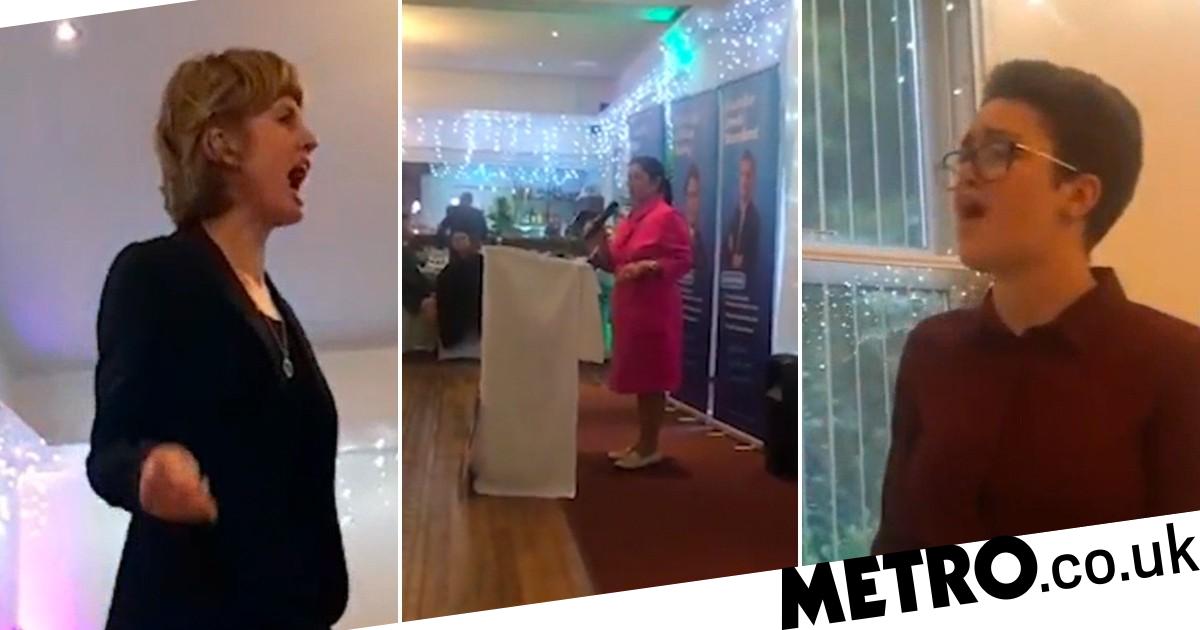 A Tory activists’ dinner hosting Priti Patel as star speaker was derailed this weekend after activists infiltrated the event.

As the home secretary started her speech, eight protesters who had gained seats at a table started demanding that she drop plans to rehome asylum seekers awaiting resettlement in the UK to Rwanda.

As they stood up one by one, waiting for the last to be dragged out by security, each activist’s intentions were only revealed to staff in consecutive order, prolonging the disuption by several minutes.

In footage of the stunt, one young protester could be heard yelling: ‘As young people wanting to live in a fair and compassionate society, we are disgusted by your treatment of refugees.’

Guests at the dinner, hosted by the local Conservative association in Bassetlaw, Nottinghamshire, could be heard trying to drown out their protest by chanting: ‘Out, out, out.’

Responsibility for the stunt was claimed by Green New Deal Rising, a climate activist group which styles itself as emphasising ‘social justice’ as well as green policies.

The group described the Rwanda scheme as ‘cruel’ and ‘morally bankrupt’ and has repeatedly claimed it will cause deaths.

In a tweet accompanying their footage of the event, the group said: ‘We’re sickened to see the Gov ramping up its hostile policies rather than helping those fleeing from war, poverty & extreme weather.

‘And as a country with a long history of exploiting people and resources, the UK must recognise its responsibility.

‘We call on the Government to provide an accessible & decent system for people seeking refuge, to drastically cut emissions and to pay its dues!’

The scheme, which will cost the government at least £120 million, will see asylum seekers arriving in the UK transferred to special facilities in Rwanda, where they will be housed and fed.

It has been criticised by the UN’s human rights agency, refugee charities and a number of MPs across the political spectrum.

Boris Johnson has said the scheme will relieve pressure on Britain’s processing facilities and help to tackle people trafficking networks, while his allies have accused critics of promoting ‘outdated’ ideas of life in Rwanda.

Last month, Ms Patel penned a joint article with Rwandan foreign minister Vincent Biruta in which they challenged critics to come up with a better plan.

The Danish government is also in talks with the Rwandan country about transferring some of its own asylum seekers to the East African nation.