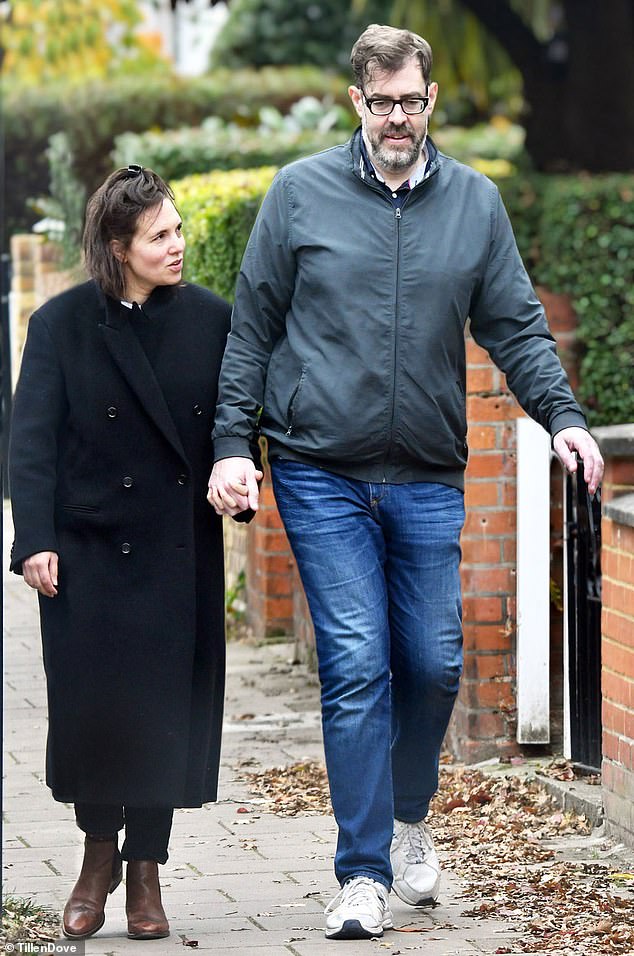 Pointless star Richard Osman has revealed how he has struggled with food addiction since the age of nine.

The TV host turned crime novelist likened the urge to secretly consume snacks to alcoholism, saying he has accepted he will face a lifelong struggle with the compulsion.

In an extremely candid interview broadcast on Radio 4’s Desert Island Discs today, the 51-year- old reveals: ‘My addictive behaviour has always been food. It has been since I was incredibly young.

Richard Osman pictured with his new girlfriend Ingrid Oliver out together in West London. The Pointless star has revealed how he has struggled with food addiction since the age of nine

‘There hasn’t been a day of my life since the age of nine where I haven’t thought about problems with food and how it affects me, and it will be with me for the rest of my life.

He added that while alcoholics may struggle to have untouched bottles of booze in the home, he had similar cravings for food, such as chocolate bars or crisps.

‘The addiction is identical,’ he said. ‘The secrecy of consuming these things, the shame behind it.’

However, the father-of-two pointed out some major differences in addressing the problem. ‘Food is a tricky one,’ he said. 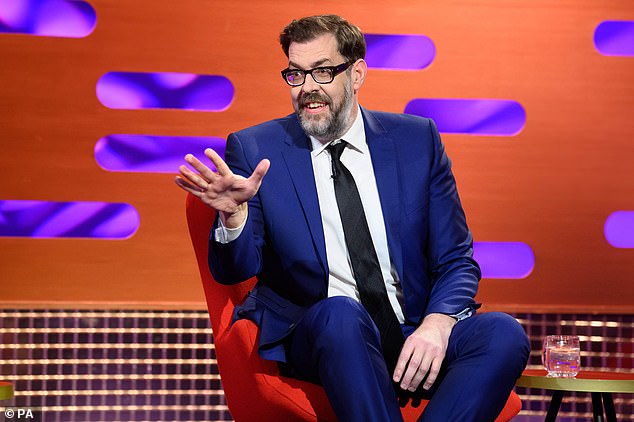 ‘Because booze and drugs you can just give up – unbelievably difficult – but, you know, a zero-tolerance policy.

‘Whereas if you are addicted to food or to love – all these things that are sustaining – you do still have to have them. So it’s quite a hard one to work your way out of.

‘Because you have to eat, it’s actually quite hard and sometimes you do slip. I try my best and I certainly have no shame about it now.’

Osman, who is 6ft 7in, said he grew up feeling awkward because of his height, noting that ‘anybody’s who’s an idiot will say something stupid to you’. 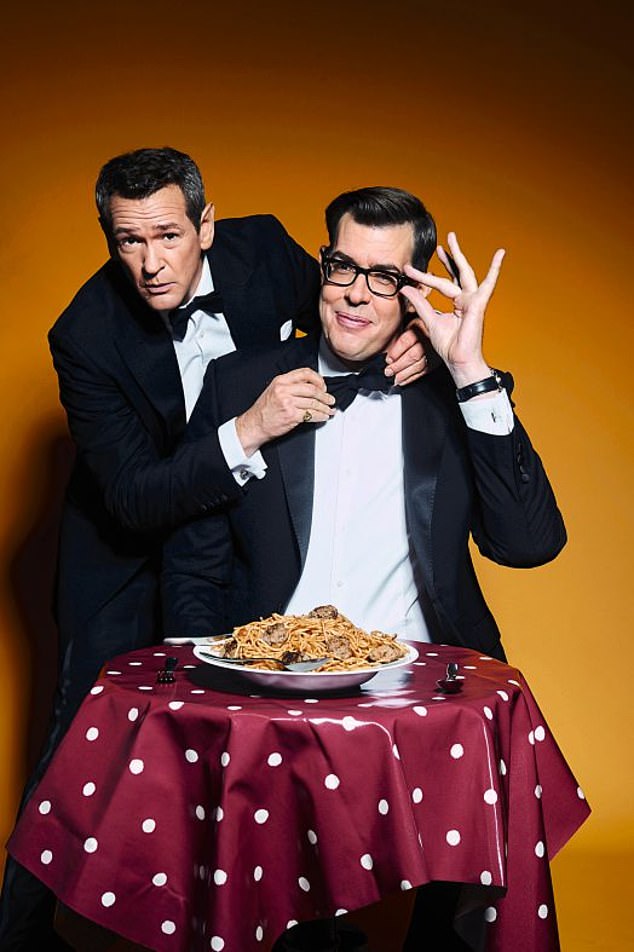 Alexander Armstrong (left) and Osman, who opened up about his problems with food in an interview on BBC Radio 4’s Desert Island Discs

He suffers from the condition nystagmus, which causes the eye to make uncontrolled motions. As such, he cannot drive and he compared his sight to being in a permanent fog.

It was television that allowed him to see a bird in a tree or a cricket ball for the first time and, he added, the inability to read an autocue has worked wonders for his career because he has had to learn how to ad-lib.

‘I have been able to use it to my advantage,’ the BBC stalwart said. ‘But I’d rather be able to see well.’

Osman also spoke to host Lauren Laverne about the life-changing moment when his father summoned the family to the living room and announced he was having an affair.

The presenter said: ‘My father left when I was quite young, when I was about nine. And that was probably the end of that innocence, I suspect.’

For several months, Osman travelled by coach from the family home in Sussex to Rugby to see his father, but he soon cut ties.

He recalled: ‘Eventually I just said, ‘Look this is not for me.’ I threw a little tantrum and said, ‘I don’t want to see you any more.’

Which, of course, was looking for attention but it was taken at face value, so I didn’t see him any more.’

The pair were reconciled when Osman became a father in his 20s. He was married from the late 1990s to 2007, and is now in a relationship with actress and comedian Ingrid Oliver. 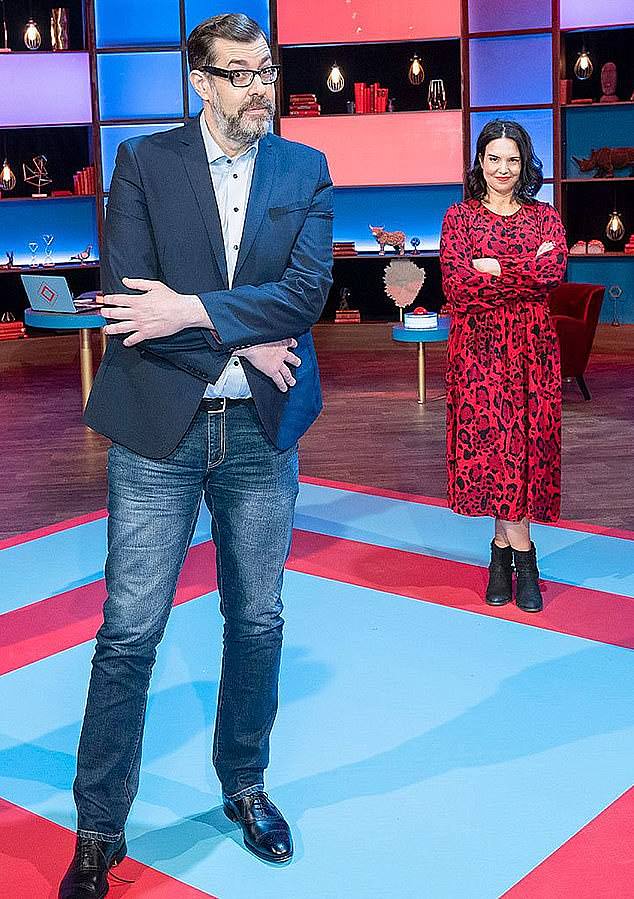 Osman, pictured with his girlfriend, is 6ft 7in, said he grew up feeling awkward because of his height

But it is his mother Brenda, a primary school teacher, that Osman credits for his success.

‘Now the favourite thing about my success is the things that I am able to give to her.’

Osman bought his mother a home in a retirement community in Sussex, which inspired his phenomenally successful Thursday Murder Club thriller series.

As well as his mother, Osman said he was inspired by his older brother Mat, who co-founded the chart-topping rock band Suede.

‘It was like someone had punched the hole in the sky for me,’ he explained.

‘You just think, ‘Wow we are from where we are from, and you are on Top Of The Pops with your friends doing these songs!’

‘I was so proud of him and also selfishly I thought, ‘We can do it. There are opportunities out there. You can make it if you want.’ I will never forget it as long as I live.’

Desert Island Discs is on BBC Radio 4 at 11am today and will be repeated on Friday at 9am.