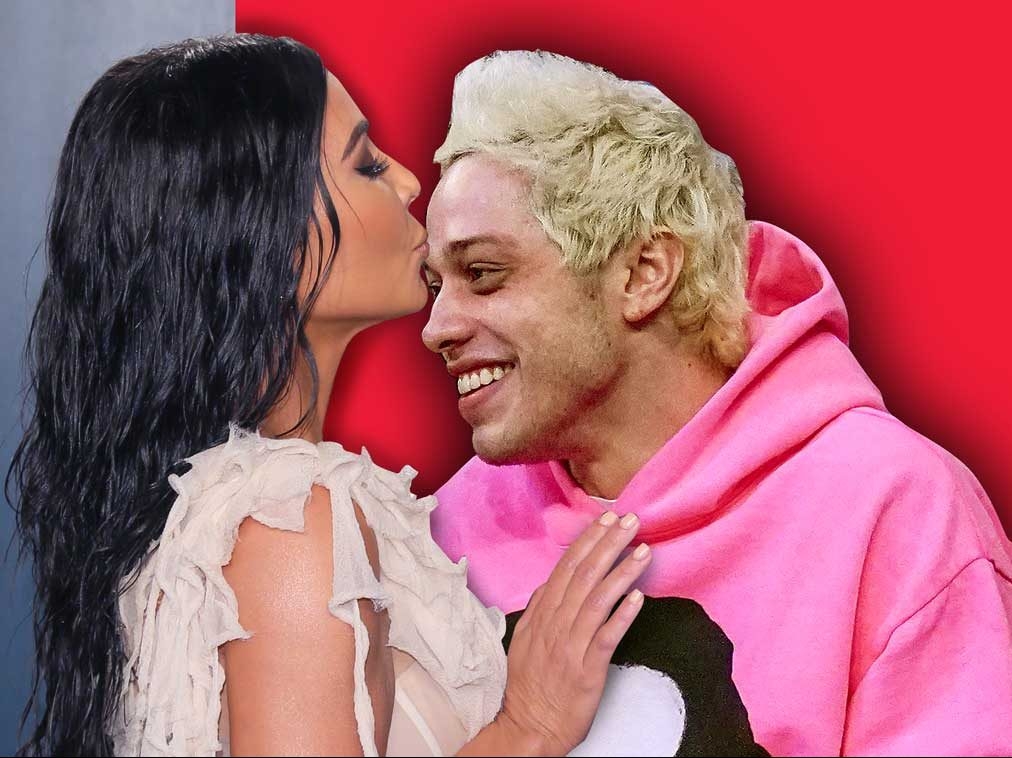 Davidson, who has been romantically linked to West’s estranged wife Kim Kardashian since October 2021, drew the ire of the hip-hop star in his new song My Life Was Never Eazy .

“God saved me from that crash/ Just so I can beat Pete Davidson’s ass,” West raps in the track.

But Davidson isn’t worried, despite the fact that West was accused of punching a man last week.

“Pete thinks it’s totally hilarious,” an insider tells Page Six . “Not just that — he thinks the whole [tabloid drama with him, West and Kardashian] is hilarious. He loves it.”

The source adds that while Davidson is used to media interest in his relationships — after he dated Ariana Grande, Kate Beckinsale, Phoebe Dynevor, Kaia Gerber and Cazzie David — his romance Kardashian has put him under a different kind of microscope.

“It’s funny to him that the press wants to know his every move all of a sudden.”

West’s new song has also strengthened the bond between the couple. “The whole craziness with Kanye last week has brought Kim and Pete closer,” a second source tells Page Six .

“Obviously she hopes this doesn’t cause more drama for Ye, but he’s an artist and this is how he chooses to express himself and she can’t judge that,” the insider tells Page Six of Fox’s thoughts on the track.

The 22-time Grammy Award winner detailed his recent fight in Los Angeles in an episode of Hollywood Unlocked , via PEOPLE .

“It was 3 a.m. in front of the Warehouse. I’m saying, ‘You don’t know what I’m dealing with right now.’ I just finished these two songs, I came from the studio,” West said, adding: “And this dude, he just had this real attitude, like, ‘What you gonna do? And see that?’ Imma just tell you, that blue COVID mask ain’t stop that knockout, you know what I’m saying?”

Elsewhere, an insider tells Entertainment Tonight that the Kardashian family is in full support of Kim’s new relationship with Davidson.

“Kim’s family absolutely adores Pete and welcomes the idea of their relationship with open arms,” the source says. “Kim radiates when Pete is around and the family really takes notice of that and respects Pete for bringing out Kim’s best self.”

According to friends, the couple is always in good spirits when they are around one another.

“Pete brings out a side of Kim that she loves. She adores Pete’s sense of humour and their chemistry is on another level. Kim likes that he is so authentically himself. He’s also really sweet and always puts Kim first. They get along wonderfully and share a really special bond.”

After the pair kicked off 2022 with a trip to the Bahamas, fans speculated that Davidson took a revealing set of bikini pics Kardashian posted to her Instagram.

“Tell Pete to not get a shadow next time,” one commentator wrote, with another fan adding, “ Why [does] this pic look like Pete took it on his Nintendo DS? ”

Another Instagram user posted, “ The shadow is Pete we all agree right ?”

According to Page Six , tensions between West and Davidson have lingered for years, first emerging after the Stronger hitmaker donned a MAGA hat when he hosted SNL in 2018 and claimed he was bullied after the program refused to air his rant about then-President Donald Trump.

“I wish I had bullied you,” Davidson said of the accusations during a Weekend Update segment. “I wish I would have suggested that it might offend some people like your wife, or every Black person ever.”