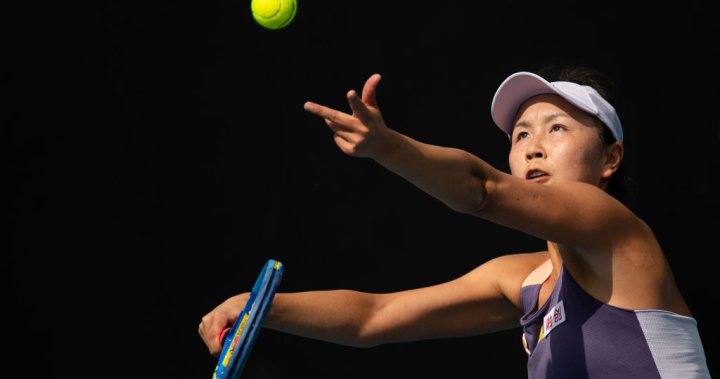 China is facing increased pressure to prove the whereabouts of missing tennis star Peng Shuai, after the head of the Women’s Tennis Association (WTA) threatened to pull tournaments out of China and the United Nations asked for proof that she is well.

Shuai, a former No. 1 ranked women’s doubles player and three-time Olympian, alleged she was “forced” into a sexual relationship with Zhang between 2013 and 2018. The Nov. 2 post was removed from her verified Weibo account, and the country’s state-controlled media has suppressed all reporting on the case.

WTA Chairman Steve Simon said Friday that he’s willing to pull the organization out of China — a move that would cost the WTA hundreds of millions of dollars.

“We’re definitely willing to pull our business and deal with all the complications that come with it,” Simon said. “Because this is certainly, this is bigger than the business.”

“We continue to call for independent and verifiable proof that Peng Shuai is safe and that her sexual assault allegation will be investigated fully, fairly and without censorship. If not, the WTA is prepared to do what is right,” he said.

China has been the focus of the WTA’s most aggressive expansion over the last decade and hosted nine tournaments in the 2019 season with a total of $30.4 million of prize money on offer. The season-ending WTA Finals had a prize purse of $14 million in 2019 when it was played in Shenzhen for the first time.

The Finals were cancelled last year due to the COVID-19 pandemic and moved this year to Guadalajara, Mexico, but the WTA has said it will return to Shenzhen from 2022 until 2030.

Earlier this week, Simon released a statement saying he was suspicious of an email released by China’s state-owned television broadcaster, CGTN, claiming it was written by Shuai. The email was written in her voice and claims she is not missing or in harm’s way: “I’ve just been resting at home and everything is fine.”

“The statement released today by Chinese state media … only raises my concerns as to her safety and whereabouts. I have a hard time believing that Peng Shuai actually wrote the email we received or believe what is being attributed to her,” he said Friday.

“The WTA and the rest of the world need independent and verifiable proof that she is safe. I have repeatedly tried to reach her via numerous forms of communication, to no avail.”

Liz Throssell, a U.N. human rights spokesperson, has also called on China to prove that Peng is all right, as well as an investigation into her allegations.

“What we would say is that it would be important to have proof of her whereabouts and wellbeing, and we would urge that there be an investigation with full transparency into her allegations of sexual assault,” Liz Throssell, the spokesperson of the UN Human Rights office, told CNN reporters in Geneva on Friday.

The issue has also emerged as China prepares to host the Winter Olympics in Beijing in February amid calls from global rights groups and others for a boycott over its human rights record. The International Olympic Committee has declined to comment on Peng’s matter, saying it believed “quiet diplomacy” offered the best opportunity for a solution.

Concern among the global tennis community and beyond has grown over Peng’s safety and whereabouts since her allegation. Some of the world’s top tennis players, including Serena Williams and Naomi Osaka, as well as the German Olympic Committee, have tweeted #WhereIsPengShuai.

I am devastated and shocked to hear about the news of my peer, Peng Shuai. I hope she is safe and found as soon as possible. This must be investigated and we must not stay silent. Sending love to her and her family during this incredibly difficult time. #whereispengshuai pic.twitter.com/GZG3zLTSC6

Chinese authorities have so far remained mum on the situation, refusing to acknowledge the missing athlete.

Speaking to reporters Thursday, China’s foreign ministry spokesperson did not share any details about the situation when asked.

“This is not a foreign affairs matter,” Zhao Lijian said. “And I am not aware of the relevant situation you mentioned.”

Why do people disappear in China?

China says it is a nation “ruled by law,” but the Communist Party ultimately holds sway and there are large gray areas of enforcement. Control over the press and social media allows authorities to keep any word of disappearances quiet and to stonewall critics, although such news often gradually surfaces through underground and foreign sources.

For celebrities in the entertainment world, tangling with the Chinese authorities can be a career killer. For business leaders, it can mean a loss of status, market access and possible incarceration. With political dissidents, it often means disappearance into the vast security state, without access to family or legal recourse.

Even before taking power in 1949, the Communist Party underwent numerous rounds of vicious struggles during which those on the losing side were disposed of without due process. The 1966-76 Cultural Revolution saw politicians, educators and musicians locked up for years without charge, often in solitary confinement.

Today, the party’s Central Commission for Discipline Inspection handles most major charges against ranking officials, who may drop out of sight for months before a terse statement is issued saying they are under investigation for “severe violations of rules and regulations.” Heavy sentences are later announced, with little or no details given about the charges or the evidence brought against them.

— With files from Reuters and The Associated Press