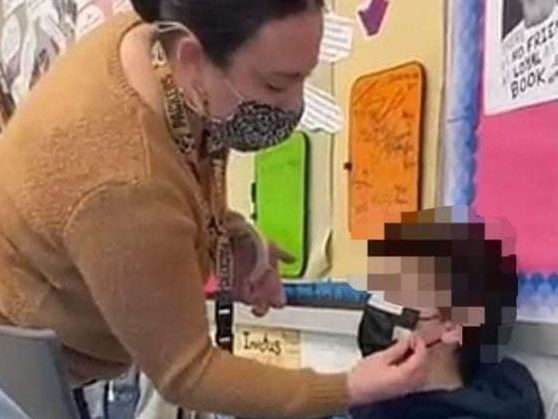 Irate parents are demanding that a middle school teacher be fired after she was photographed taping a mask to a student’s face.

A Facebook group called “North Penn Stronger Together” shared the image of a teacher fastening masking tape on a face mask already on the student’s face.

“Pro-mask or anti-mask, I hope we can all agree that taping masks to children’s faces crosses the LINE,” reads the post. “This was not a joke for the child or the parents.”

The post called on the “North Penn Neighbors for Progress and North Penn School District to address” the photo, asking for “respect” for the student and his family.

One person commented that the teacher “did not ask for consent” from the “mortified” student.

“He was then made fun of and teased the remainder of the day,” the commenter added. “As a non- medical professional she should have sent him to the nurse for assistance or contacted his parents.”

“This is unprofessional behavior by the teacher and assault,” they wrote. “She has no right to touch this person in any context. Shame on the school for excusing this behavior.”

The North Penn School District issued a statement in response to the post, calling the teacher’s actions “unacceptable” and it would be investigating.

“An image taken in one of our classrooms last week and circulating on social media does not represent the universal values that the North Penn School District strives to instill in both our students and staff,” it read. “After an immediate investigation, it was determined that while the incident was isolated and no malice was intended, the actions of the teacher were entirely inappropriate and unacceptable, no matter the context.”

It concluded: “We understand that the act of taping a mask to a student’s face is concerning to many and apologize that it occurred. The matter is serious and it is being addressed with the employee.”

The district, however, did not say what ramifications, if any, the teacher is facing.

The student’s mother called the attention the photo has garnered her “worst nightmare,” explaining she only posted it on a local private group ahead of an upcoming board meeting.

“Certain individuals felt compelled to take matters into their own hands, including contacting local authorities and disseminating this image of my son to various media outlets,” the mother told NorthPennNow.com , which did not reveal her identity.

“If I had any idea that this would evolve to such a level, I would never have permitted it to be shared with that private group.”