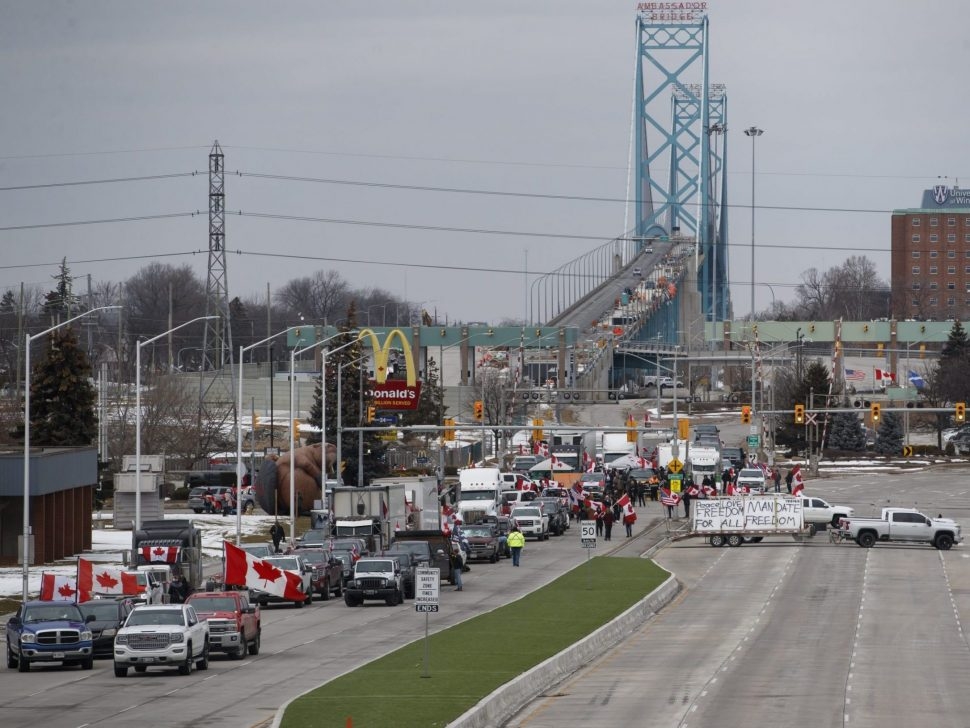 Ontario introduced legislation Monday with measures aimed at tackling blockades at international border crossings like the one at the Ambassador Bridge in Windsor that disrupted trade with the U.S. last month.

Solicitor General Sylvia Jones introduced the Keeping Ontario Open for Business Act in the provincial legislature on Monday, as Premier Doug Ford headed to Washington to polish his province’s image as a reliable trade partner with the U.S.

Jones said the bill — which would make permanent several emergency measures the province introduced to dispel anti-vaccine mandate protesters in Windsor and Ottawa — would protect jobs that depend on trade and shield the economy from disruptions like facility closures and supply chain issues if similar situations arise in the future.

“Our government is focused on public safety and ensuring that people and goods can move across our international borders unimpeded,” Jones said.

“We are signalling to the world that Ontario is a reliable trading partner that is open and will remain open for business.”

The bill would give police the ability to impose roadside suspension of drivers’ licences and vehicle permits, seize licence plates when a vehicle is used in an illegal blockade and remove and store objects making up an illegal blockade.

The move in Toronto came as Ford was in Washington, D.C. to discuss trade with U.S. business leaders and officials. A statement from Ford’s office said he would “re-affirm that Ontario is a safe and reliable jurisdiction for investment and business” on his trip.

Ford and Economic Development Minister Vic Fedeli were to meet with Canada’s ambassador to the U.S., the under secretary of commerce for international trade and the assistant U.S. trade representative for the Western Hemisphere, to discuss protecting jobs and “an integrated economy.”

The pair were also set to participate in discussions at a Canadian American Business Council event, with Ford due to present remarks before the roundtable talk.

The government said the new legislation would allow the province to respond to disruptions to critical border infrastructure in the future without declaring a state of emergency.

Ford declared the emergency on Feb. 11, nearly two weeks after the Ottawa protest began and days into the shutdown at the critical trade route between Windsor and Detroit.

He pledged at the time to enact orders that would fine people up to $100,000 for blocking critical infrastructure and authorize the removal of licences if people didn’t comply. At the time he said he aimed to make the measures permanent at some point.