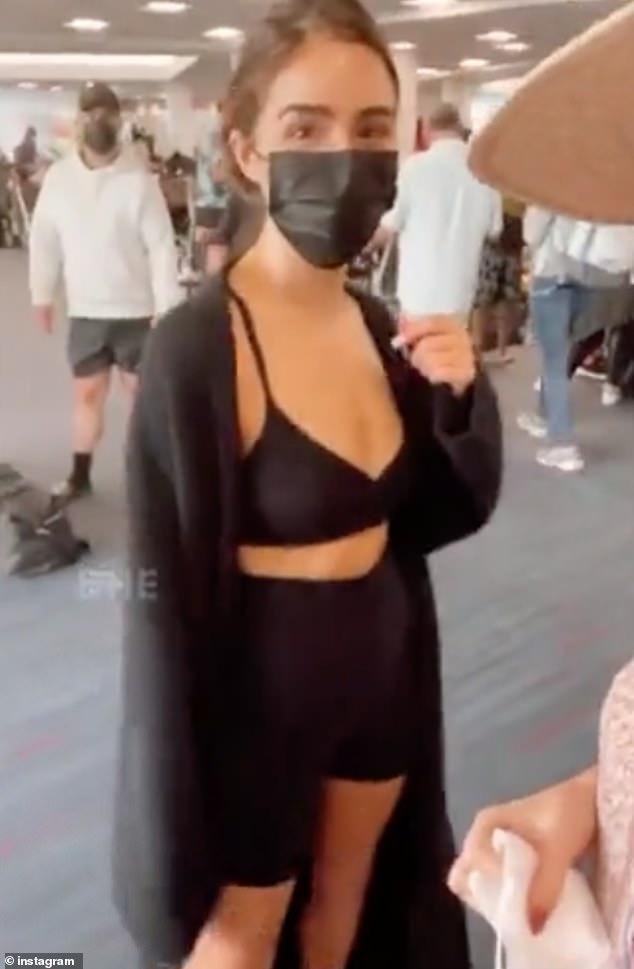 Former Miss Universe Olivia Culpo has slammed American Airlines after staff told her that her traveling outfit was ‘inappropriate’ and demanded that she put on a blouse over her crop top and bike shorts or risk being banned from her flight to Mexico on Thursday.

The 29-year-old shared details of the altercation on her Instagram Stories, where both she and her older sister Aurora – who was traveling with her – took the airline to task over their dress code guidelines.

Sharing a video of Culpo’s ensemble on her own account, the model’s sister Aurora insisted that her sibling looked ‘cute’ and ‘appropriate’ in her athleisure look, which consisted of a black sports bra, black biker shorts, and a long black cardigan.

However, American Airlines staff clearly did not agree, with Aurora revealing: ‘Olivia and I are going to Cabo. Look at her outfit… She looks cute, she looks appropriate, no?

‘They call her up to the desk and tell her that she needs to put a blouse on otherwise she can’t get on the plane. Tell me, is that not so f***ed up? American Airlines, I love you so much, [but] please get me to Cabo.

Culpo then re-shared the video on her own Instagram, where she questioned how her outfit could have been deemed ‘offensive’, writing: ‘Oh no I’m confused lol. Is this inappropriate/offensive?’

Upset: Former Miss Universe Olivia Culpo has hit out at American Airlines after being told that her sports bra and biker short ensemble was ‘inappropriate’ and that she needed to cover up 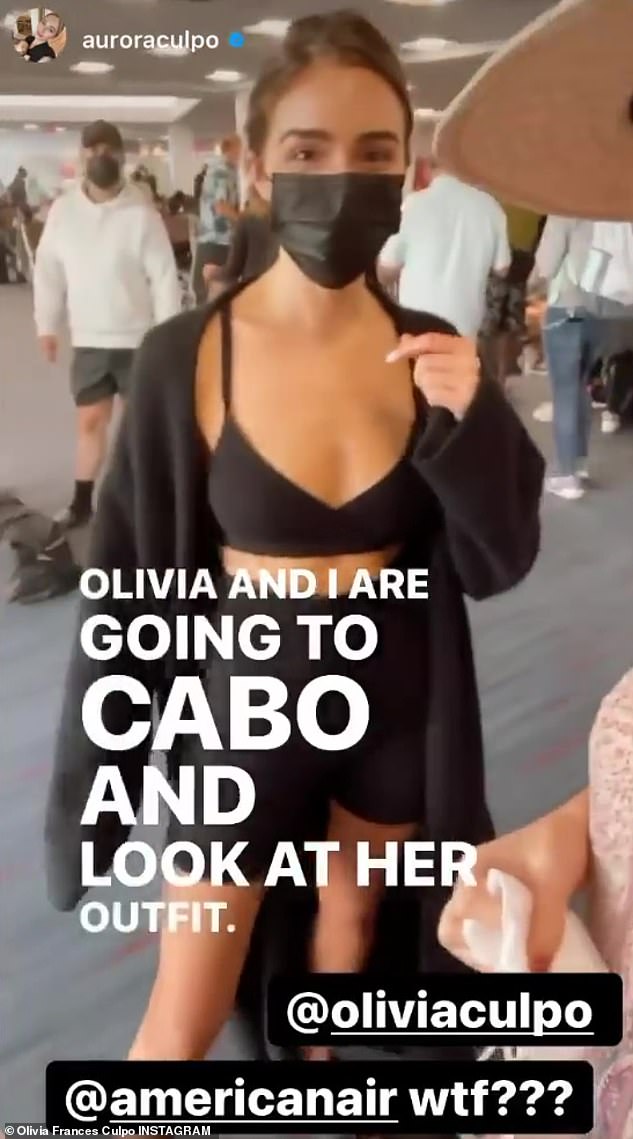 ‘WTF?’ The 29-year-old flew to Cabo with her boyfriend Christian McCaffrey and her sister Aurora – who shared details of the incident on her Instagram Stories

To add insult to injury, after Culpo covered her ensemble up with a large hoodie that she borrowed from her NFL player beau Christian McCaffrey, she and her sister came across a fellow passenger who was also wearing a similar athleisure look, which had not been flagged by American Airlines staff.

‘See? She looks beautiful but they don’t care,’ Aurora said, while filming the unnamed woman’s look, which featured a turquoise sports bra, turquoise leggings, and a long turquoise cardigan. ‘But [Culpo] has to cover up?’

The woman in the turquoise outfit was equally horrified by American Airlines’ treatment of Culpo, joking that the model actually looked far more reserved than she did, saying: ‘She’s covered up! My titties is out! That’s weird.’

On its website, American Airlines offers very limited guidance about what outfits are deemed appropriate for travel, saying simply in its ‘conditions of carriage’ that passengers must ‘dress appropriately’, adding that ‘bare feet or offensive clothing aren’t allowed’.

Although Culpo agreed to cover up in order to be allowed onto her flight, she didn’t stop questioning the airline’s decision on Instagram, where both she and her sister continued to post about the incident.

After boarding the plane, Aurora shared an image of Culpo’s boyfriend with his arms tucked inside his white T-shirt, joking that the football star was ‘freezing’ because he’d had to hand over his sweatshirt to his girlfriend.

‘When you freeze [because] your lady dress[ed] inappropriate AF,’ Aurora captioned the image. ‘Exactly how Jack from the Titanic died.’

Culpo’s furious sibling then shared a tongue-in-cheek post featuring the different elements of her sister’s ensemble, all of which were from Naked Cashmere, while branding it a ‘get kicked off American Airlines starter kit’. 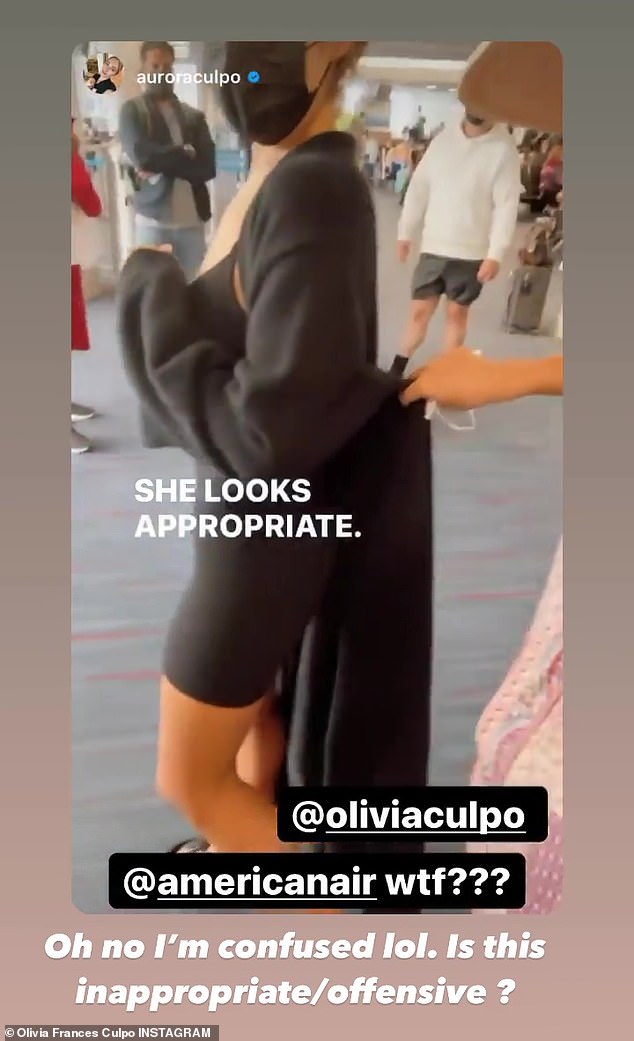 Confused: The Sports Illustrated cover girl’s sister, Aurora, made the allegations while recording her sibling’s outfit, which she did not seem ‘inappropriate’ or ‘offensive’ to her 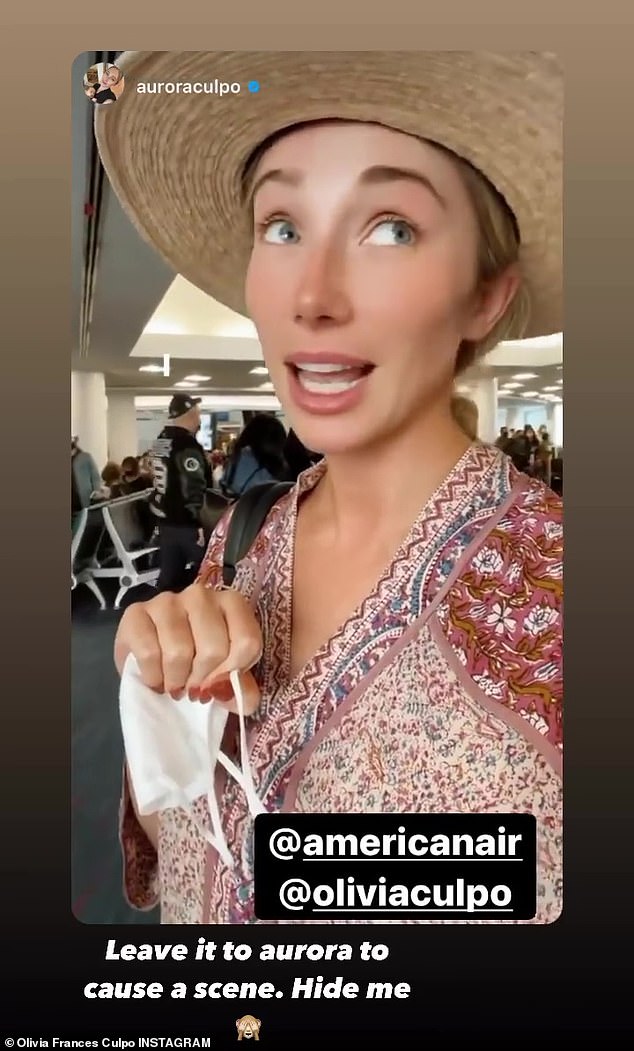 ‘I’m confused,’ Aurora captioned the footage posted to her Instagram Story, which showed the former Miss Universe in a long black cardigan, sports bra and biker shorts. ‘Tell me that’s not so f***ed up’

Once the group arrived in Cabo, their mockery of the airline continued, with Culpo sharing an image of herself, her boyfriend, and her sister in their car from the airport, which she captioned: ‘Third wheeling adventure continues.

‘I’m dressed back in my risque athleisure outfit and gave Christian back his clothes lol.’

She went on to post a vintage image of American Airlines staff from 1981, in which they are seen sporting very conservative uniforms, cheekily writing that the full-coverage ensembles were her ‘next airport lewk’.

Adam Anolik, who specializes in travel law, previously told The Washington Post: ‘Different airlines have their own policies regarding dress, but they are often vague and leave an exorbitant amount of discretion to the airline employees.’

Both Southwest and JetBlue deny passengers dressed in ‘lewd, obscene, or patently offensive’ garments, while Delta says travelers will deny those in attire that ‘creates an unreasonable risk of offense or annoyance to other passengers’ 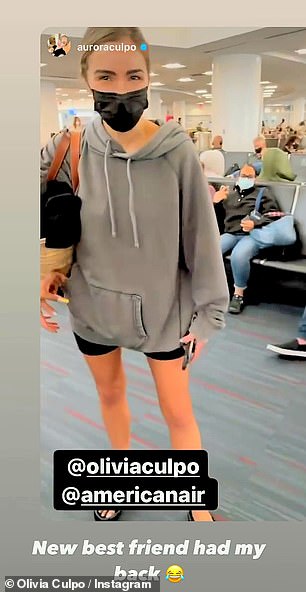 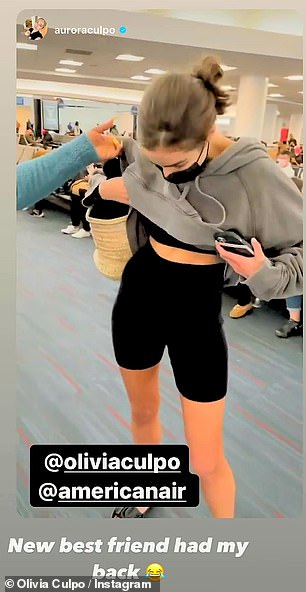 Not fair: After changing into an oversized hoodie to cover up, another passenger in a more revealing outfit told Olivia she was surprised she wasn’t being called out too since her ‘titties’ were also ‘out’ 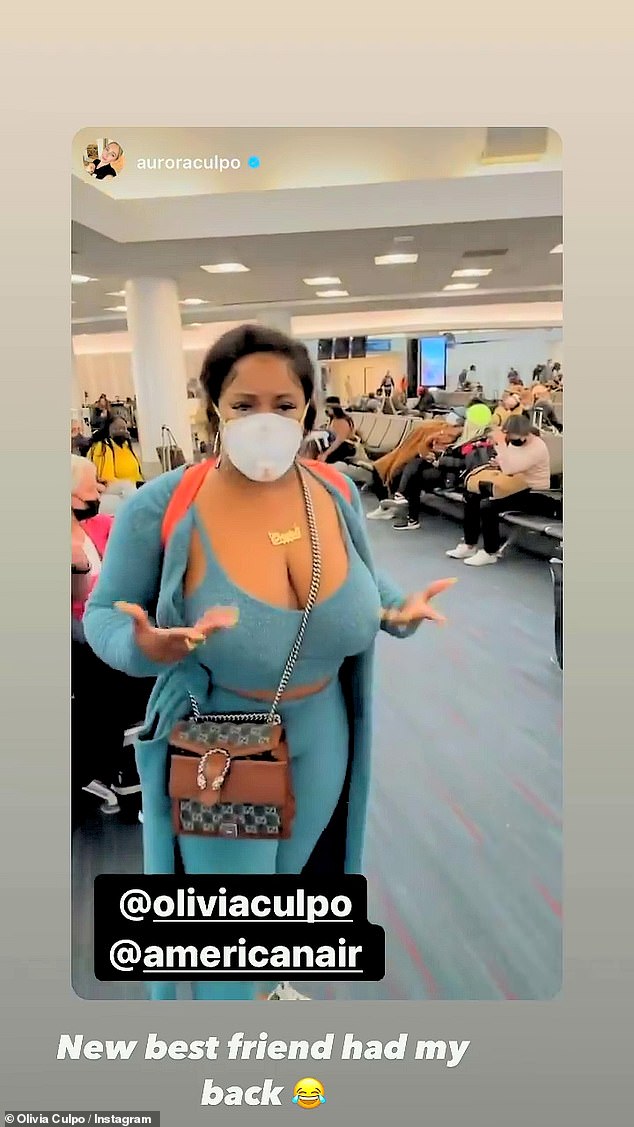 ‘That’s weird,’ the traveler said of the supermodel being told to add a layer

Previously, Culpo slammed JetBlue for banning her dog from her flight home to  Rhode Island as she attempted to visit her parents. 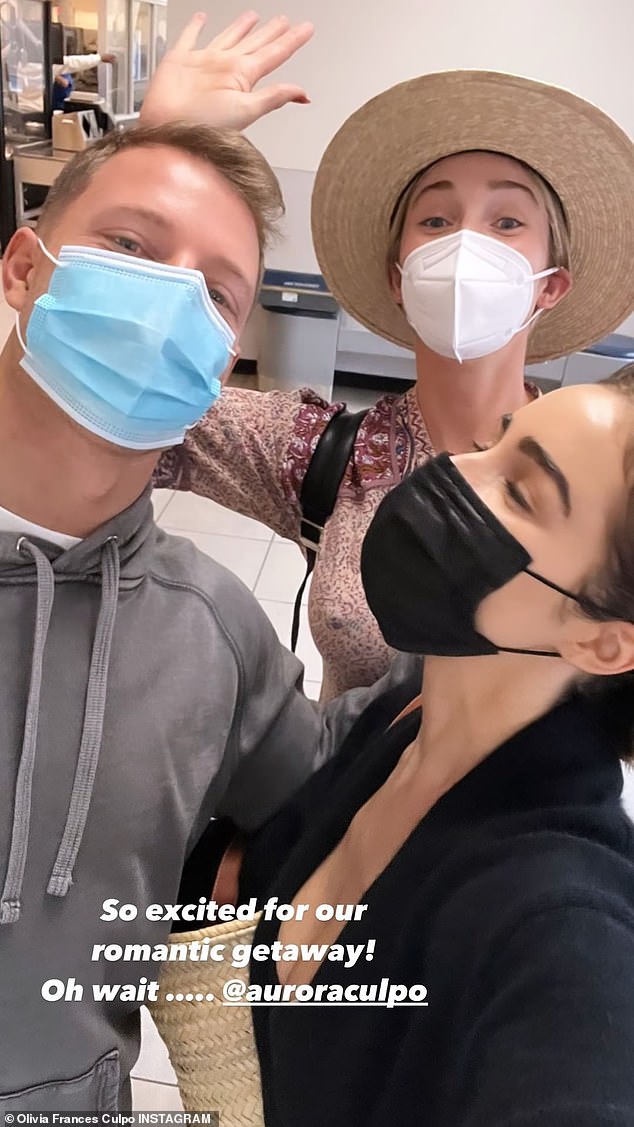 ‘So excited for our romantic getaway! Oh wait…. @auroraculpo,’ Olivia captioned a selfie with her boyfriend Christian McCaffrey and older sibling

‘I’m sure I’m not the only one who ran away crying at the airport, but it’s the worst experience I’ve ever had,’ she said. ‘I just want to be able to go home.’

‘When both your parents have COVID and you’re trying to get home to help them but suddenly your dog who was already pre approved is not allowed to fly with you.

‘I have never wanted to be this person and I have always been the hugest @jetblue fan but I am just soooo so so upset right now. He has flown on this airline so many times and it’s never been an issue,’ Culpo wrote on her Instagram post. 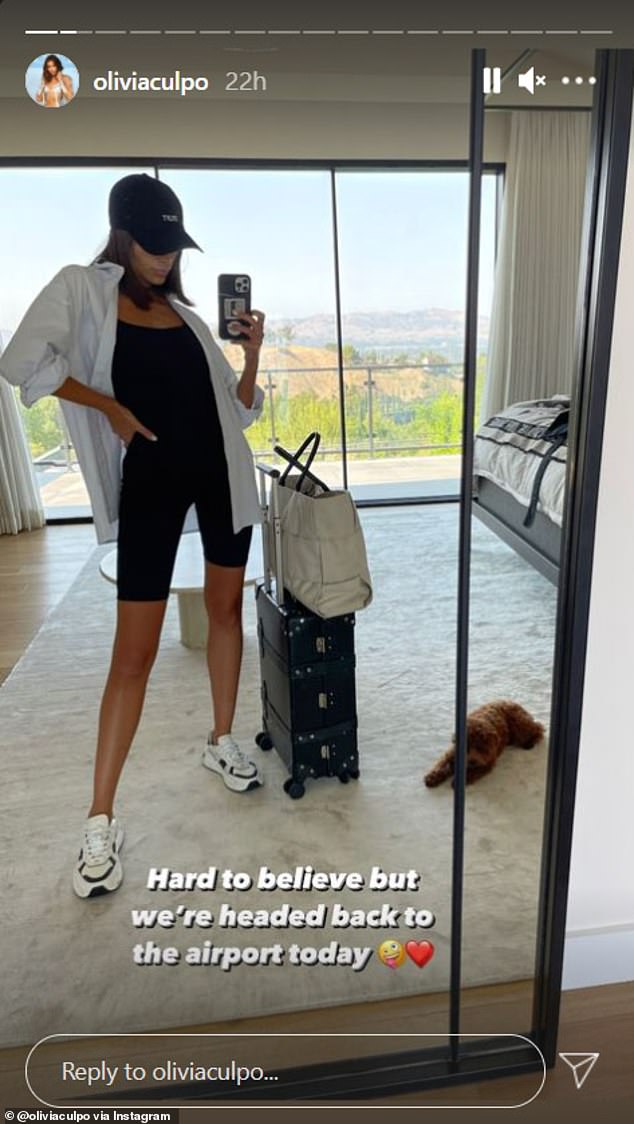 Past turbulence: Previously, Culpo slammed JetBlue for banning her dog from her flight home as she attempted to visit her parents

Jet Blue did not explain why the dog was unable to board the flight like before, but suggested it may have had to do with the fact that the dog is not a trained service animal, Fox Business reports.

The airline said in a statement: ‘At any time while traveling, our crewmembers may ask legally allowed questions and confirm the qualifications of a trained service animal.’

‘We work to consistently enforce these policies, however, a customer may be stopped from proceeding with travel at any point if it is determined an animal does not meet the required qualifications,’ they concluded. 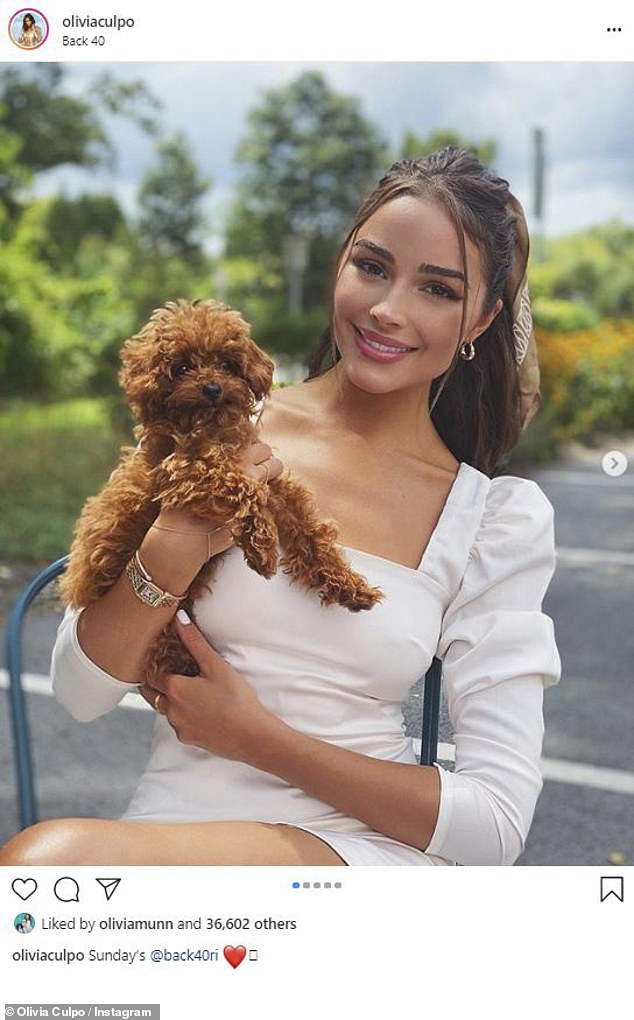 Policy changes: Jet Blue did not explain why the dog was unable to board the flight like before, but suggested it may have had to do with the fact that the dog is not a trained service animal, Fox Business reports