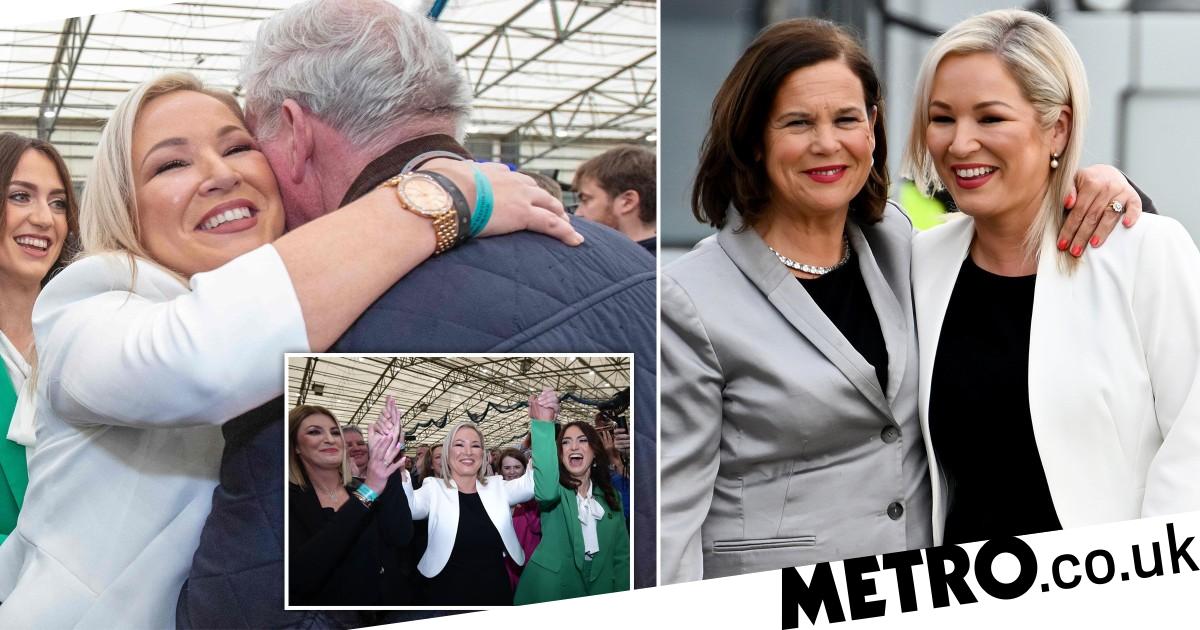 A united Ireland will move a huge step closer today, with Sinn Fein on course to be the largest party in Northern Ireland.

The nationalists will top a national poll for the first time ever and look set to tally a bigger vote share than any unionist party.

It means Northern Ireland will have a first minister who wants the province to leave the United Kingdom, a huge symbolic victory for the nationalist community.

Counting is set to resume and conclude today but the ramifications for power-sharing arrangements Stormont and the United Kingdom could last for years.

The election comes two years after Sinn Fein – for decades associated with the IRA – won the most votes in the Republic of Ireland and picked up more seats than at any time since 1923.

Any vote is years away in reality and Sinn Fein have downplayed it in this election but the party is ideologically committed to holding a border poll in the future.

Earlier in the campaign, Sinn Fein president Mary Lou McDonald told the BBC: ‘I believe Irish reunification and a new Ireland is the best opportunity for everybody who lives on this island and we need to talk about that.’

In another interview, she said a referendum could be possible in between five years and a decade.

It remains to be seen if the precarious governance structures put in place by the Good Friday Agreement, designed to ensure representation for both communities in Northern Ireland, will function after this election.

The executive wing of the government has been in tatters since the DUP, the largest unionist party, pulled out in February in a row over post-Brexit trade arrangements.

It’s unclear if the DUP will return to government and what ramifications further wrangles over the Northern Ireland protocol could have.

Nationalists and unionists are divided over the policy, which removes the need for border checks between the North and the Republic but creates a ‘border in the Irish sea’.

Boris Johnson is under pressure from some within his own cabinet to unilaterally suspend the deal, a move that would in all likelihood make the prospect of functioning power-sharing even more remote.

But Sinn Fein’s victory, on a pro-protocol platform, makes it more difficult for the prime minister to trigger article 16.

The DUP, which is on course to finish second, has previously said it will not return to government while the protocol arrangements are in place, setting up a stalemate which could leave Northern Ireland rudderless.

If a government is not formed – whereby a Sinn Fein first minister and a DUP deputy with equal powers would govern in tandem – there could be new elections within 24 weeks.

When counting was suspended on Friday night, just 47 of the 90 seats had been filled following a lengthy process, with only four out of 18 constituency counts completed.

Sinn Fein currently has 18 seats, while the DUP have 12, the Alliance Party eight, the Ulster Unionists (UUP) four and the SDLP on three, with one seat going to TUV leader Jim Allister and one to independent unionist Alex Easton.

Naomi Long’s Alliance Party looks set to be the other main winner from the election, with a surge of support for the cross-community party likely to make it the third largest at Stormont, ahead of the UUP and SDLP, who have both had disappointing results.

The DUP, led by Sir Jeffrey Donaldson, will comfortably retain its position as the largest unionist party despite a drop in its overall share of the vote.