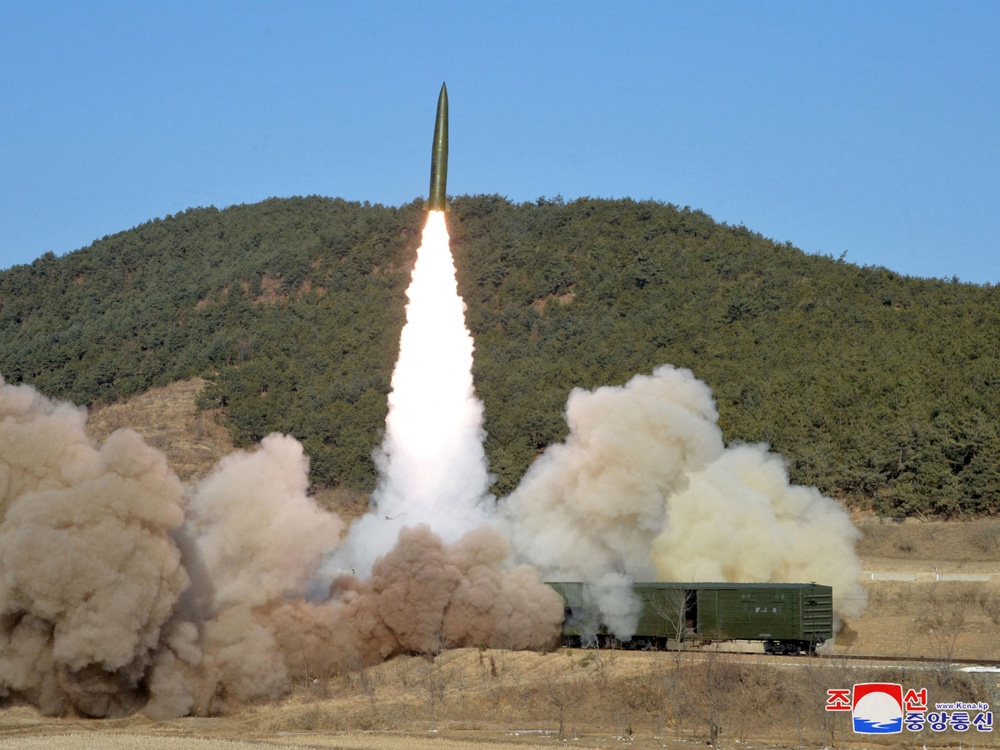 SEOUL — North Korea tested a railway-borne missile in its firing drills on Friday, state media KCNA said on Saturday, amid a U.S. push for fresh sanctions against the isolated state following its recent series of weapons tests.

South Korea’s Joint Chiefs of Staff said two short-range ballistic missiles (SRBMs) traveled about 430 kilometres  to a maximum altitude of 36 km after being launched eastward on the northwest coast of North Korea.

The official KCNA news agency did not specify the missiles’ range, or trajectory, but said a firing drill was held in North Pyongan Province to “check and judge the proficiency in the action procedures of the railway-borne regiment.”

The country tested the rail-based system for the first time last September, saying it was designed as a potential counter-strike to any threatening forces.

Hours before the latest test drill, North Korea slammed the United States for pursuing new sanctions in response to its recent missile launches, calling it a “provocation” and warning of a strong reaction.

North Korea has defended the missile tests as its sovereign right to self-defense and accused the United States of intentionally escalating the situation with new sanctions.

North Korean leader Kim Jong Un did not attend the drill. KCNA said the military leadership had ordered the test “at short notice” and the system precisely struck the target set in the east coast with “two tactical guided missiles.”

The system “demonstrated high maneuverability and rate of hits,” KCNA said, adding its success led to discussions to “set up proper railway-borne missile operating system across the country.”

North Korea has been steadily developing its weapons systems, raising the stakes for stalled talks aimed at dismantling its nuclear and ballistic missile arsenals in return for U.S. sanctions relief.

Cheong Seong-chang, director for North Korean studies at South Korea’s Sejong Institute, said the test could be an “instant display of force” to protest against the U.S. sanctions push, noting that it was not planned in advance and unusually took place in the afternoon.

“It’s a message that they would take an ‘eye to eye’ approach if Washington presses for sanctions for testing non-long-range missiles,” Cheong said.

KCNA released photographs showing a missile trailing a column of smoke and flame as it was launched from the top of an olive-green train in a mountainous area, before arrowing down on a small island, sending up a cloud of smoke and debris as it hit.

Despite North Korea’s limited and sometimes unreliable rail network, rail mobile missiles are a relatively cheap and efficient option to improve the survivability of their nuclear forces, making it difficult for enemies to detect and destroy them before being fired, analysts said.

First tested in May 2019, the KN-23 resembles Russia’s Iskander-M SRBM visually, and is designed to evade missile defenses and conduct a precision strikes, experts said.