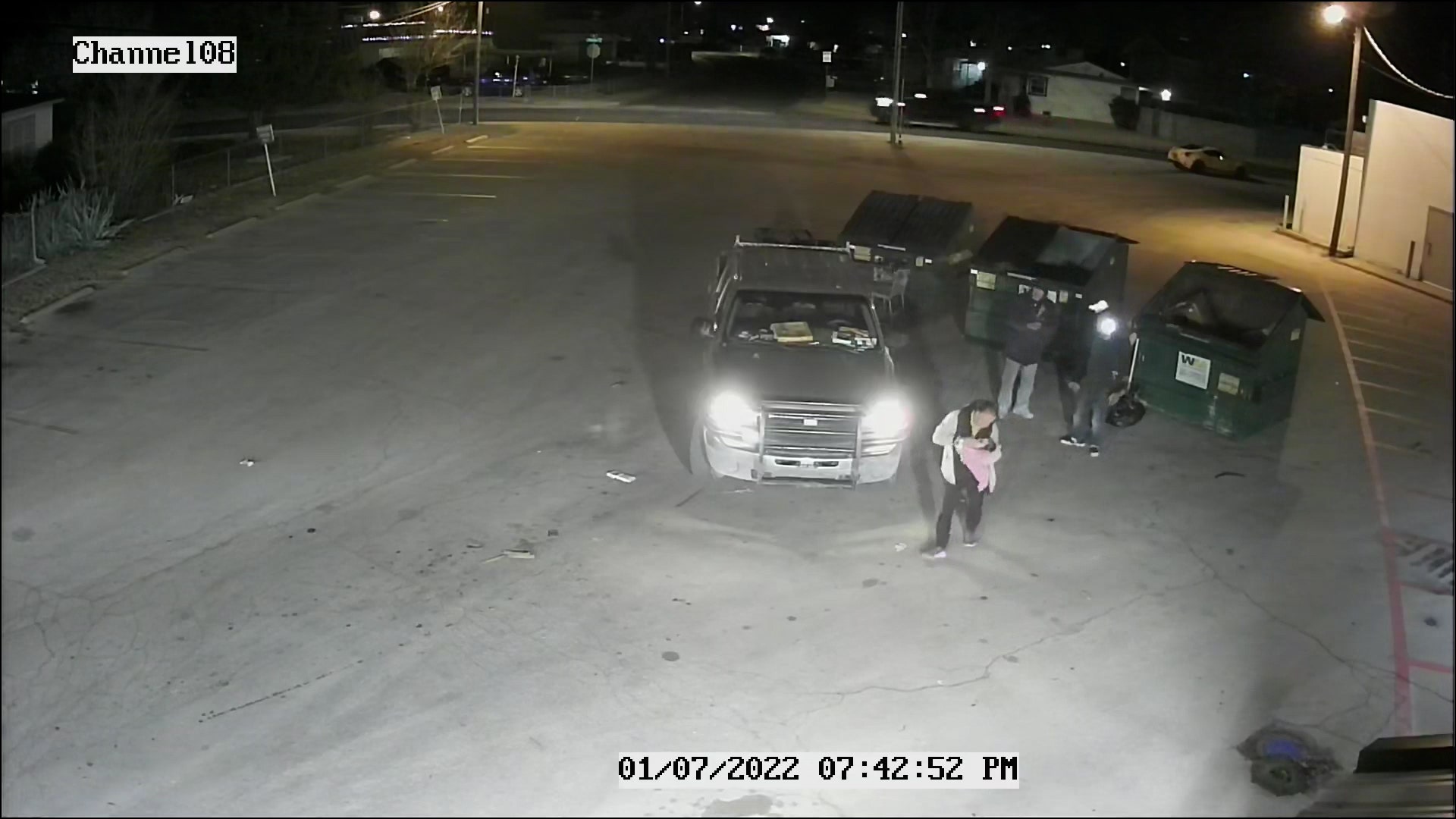 As New Mexico authorities are accepting non-monetary donations on behalf of a baby boy abandoned in a dumpster in the city of Hobbs and for other children under state care, the mother of the woman accused of abandoning him is telling reporters, “Everybody makes mistakes.”

Alexis Avila, 18, has been charged with attempted murder and child abuse in connection with the incident, according to city police. She allegedly wrapped the baby in a blood-soaked towel and two garbage bags, then abandoned him in 36-degree weather with his umbilical cord still attached.

More than five hours later, the cameras show a group of people fishing through the dumpster and pulling the baby out.
(Joe Imbriale/Rig Outfitters)

A woman who picked up the phone at a number listed for her mother, Martha Avila, said it was the wrong number Tuesday.

But the elder Avila defended her daughter to a Daily Mail reporter outside her home in the city of Hobbs.

Alexis Avila, 18, is expected to be arraigned Jan. 12 at Lea County District Court in Lovington, New Mexico, after allegedly abandoning her newborn baby in a dumpster.
(Hobbs Police)

She also doubled down on the claim that her daughter didn’t know she was pregnant, which police said the young woman told investigators when they brought her in for questioning, and she allegedly admitted to the crime. During that same interview, police said she only referred to the child as “it.”

The video shows a woman pulling up in a white car around 2 p.m. MT Friday, unceremoniously tossing a black bag from the backseat into the dumpster and driving off.
(Joe Imbriale/Rig Outfitters)

As for the baby boy, a group of good Samaritans stumbled across him and rescued him from the dumpster. He is in stable condition at a hospital in Lubbock, Texas, and in the “lawful custody” of the New Mexico Children, Youth and Families Department (NMCYFD), according to Hobbs Acting Police Chief August Fons. He said he could not release additional details Monday due to confidentiality concerns.

The child’s father is believed to be a teen from Hobbs, whose identity police did not release because he is under 18.

NMCYFD representatives did not immediately respond to calls or messages seeking comment on whether the boy would eventually be placed with his father or how members of the public can apply to adopt.

Martha Avila told Hobbs police that she had banned her daughter’s ex from visiting their house because he allegedly “battered” her daughter in June, according to a criminal complaint.

“Even if she doesn’t want custody, she should be caring enough about her grandbaby to be saying, ‘No, he’s an abusive boyfriend, and I don’t want him to have custody,” said Joe Imbriale, a local store owner whose surveillance cameras captured the incident and drew national attention Monday.

He also questioned the Avilas’ timeline of events, which included a Jan. 4 doctor visit for prescription pain meds, according to court documents.

“If they did that, wouldn’t they have done a pregnancy test on a girl that young?” he asked. “There’s a lot of holes in her story.”

Imbriale’s surveillance video shows a woman tossing a garbage bag into a dumpster and a group of people finding a baby inside almost six hours later.

“She’s trying to defend her daughter, why doesn’t she stop shouting her mouth off and take ownership of how she raised her daughter,” Imbriale told Fox News Digital Tuesday. “Stop trying to protect her now. You screwed up, you raised a terrible daughter.”

The video showed a woman, alleged to be Avila, pulling up in a white car around 2 p.m. MT Friday, tossing her newborn baby boy from the backseat into the dumpster and driving off.

Around 7:45 p.m., Michael Green, Hector Jasso and April Nuttall arrived to scavenge anything of value from the dumpsters. But they heard cries coming from inside a bag and fished it out.

The video shows that Nuttall picked the infant out of the garbage bag and cradled him in her arms as Green called 911.

“Their collective quick response to this emergency, including notification of 911, was absolutely pivotal in saving this baby’s life,” Fons said.

The state’s Children, Youth and Families Department says donations of gift cards, toys, clothes or other items can be sent to 907 West Calle Sur in Hobbs, New Mexico.

The CYFD does not accept money or used items.

“Additionally, donations of new items for children of all ages in the care of the NMCYFD are accepted each and every day, and these children are always in dire need of such items,” Hobbs police said in a statement.

All 50 states have “safe haven” laws that allow newborns to be dropped off without criminal penalties at designated locations.

“If you’re struggling with a new infant, and you’re unable to take care of that baby, the best response is to find somebody that can help you at a designated safe haven,” Fons said Monday.

Those include fire and police departments.