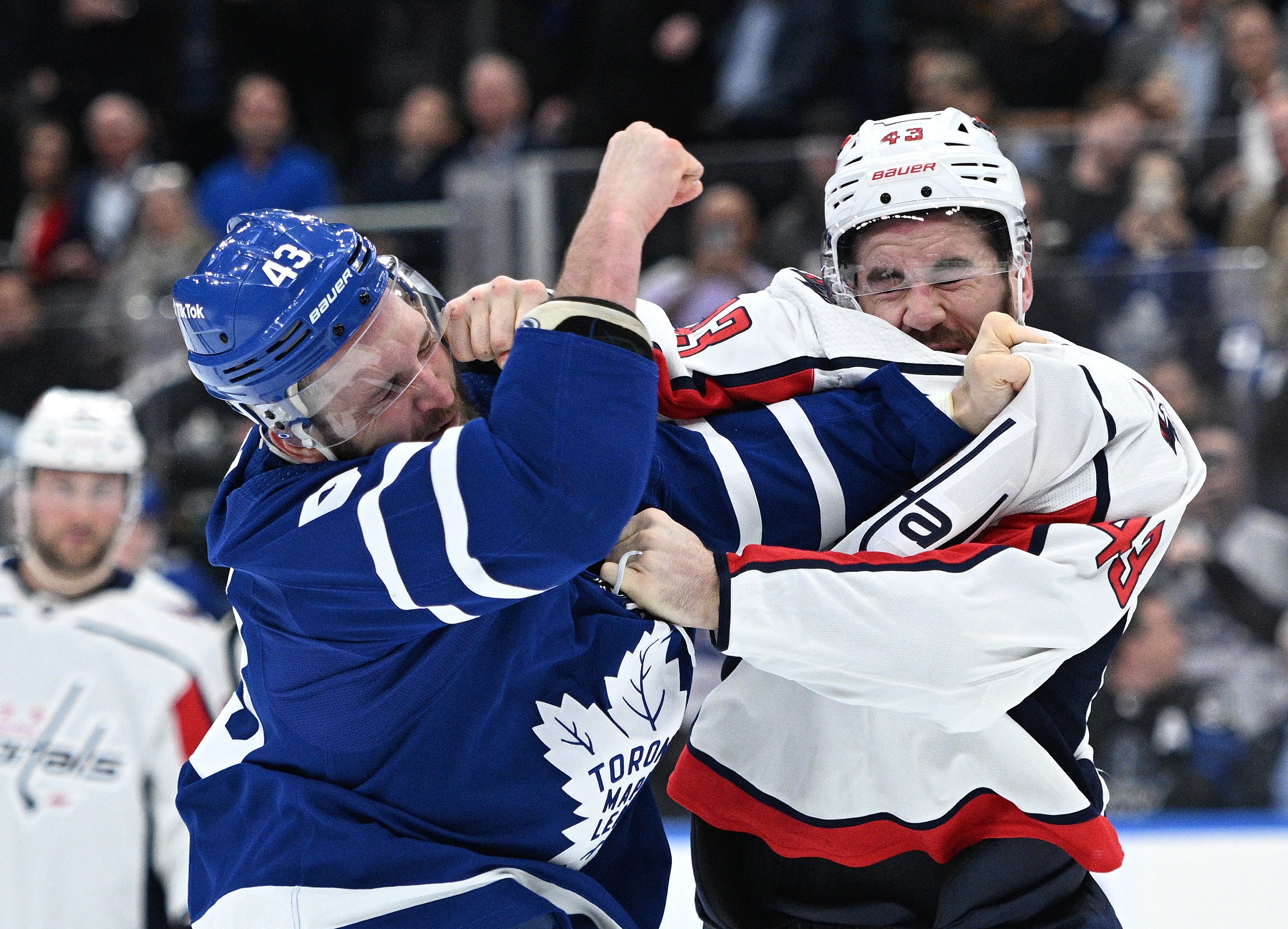 Kyle Clifford, who looked like he might be stuck on the farm for a while a few weeks ago, stepped up against Tom Wilson in the second period. The Washington strong man was having his usual boisterous hometown night against the Leafs, running over Mark Giordano, bumping the mask off of goalie Jack Campbell in what could be classified ‘accidentally on purpose’ in an intense game and when the score began getting out of hand (a 7-3 final), Wilson went looking for a dance partner to inspire his team.

Clifford is hardly a novice NHL pugilist, but few tangle with Wilson and his 1,300-plus penalty-minute rap sheet. Clifford stayed in to get a shot or two in as Wilson connected with force and the two yapped in the penalty box afterwards.

For a team that prefers to intimidate through scoring, but has lost some of that edge when physicality ramps up in playoffs, it was a good time and good game to respond in kind. Clifford and Wayne Simmonds will have that often thankless job as part of their fourth-line role.

“I just thought that was great,” Auston Matthews said of the Clifford-Wilson bout. “He’s not afraid of anybody, he’s shown that through his whole career and then stepping up for Soup.”

Campbell was grateful, as he also is that defenceman Ilya Lyabushkin has emerged as a blueline bodyguard.

“So competitive, throwing his body around, doing a great job in front of the net. Any time somebody even breathes on me out there, he gets right in their face. I think he fits perfectly into this group.”

Both Matthews and coach Sheldon Keefe noted Lyabushkin has been more excited the past week since his family joined him from Arizona, where they’ve been since the trade, and it’s shown in his play. He scored his first as a Leaf Thursday.

The Gopher won’t be going to Hogtown this year.

Matthew Knies, the club’s first pick in 2021, wants to return to the University of Minnesota, multiple reports said Thursday night. He’d taken a day to ponder his future following a meeting in the Twin Cities with Leafs general manager Kyle Dubas. That it wasn’t a slam dunk Knies would leave as soon as his team was eliminated from the NCAA playoffs a few days ago indicated there wasn’t a rush to sign.

The Leafs wanted him, but also believe they’re positioned with enough veteran depth in the playoffs, between the current team and if needed, the AHL Marlies, with young forwards such as Nick Robertson.

The 6-foot-3 Knies, a point-a-game left winger, had a great freshman year and wants to go for the national title again.

“We believed as an organization he was ready to come in and play,” Keefe said. “But he’ll be more ready a year from now. If he or his family feel he’s not ready for this step, we have to respect that decision. He’s only 19. What they’ve done in Minnesota is serving his development.”

John Carlson has seen the Alex Ovechkin show many times, but the Great Eight’s goal total itself make his head spin. He needs one goal for 777 in his career, already third in NHL history.

“We’re kind of numb as his teammates,” the defenceman said. “Not that we discount him, but it seems the past six or seven years, every other day, it’s a new record, he passes this guy, that guy or reaches this milestone.

“We might not relish just how lucky we are that we have the best seat in the house to see what he’s done in his career and what he’s doing now.”

Carlson has not witnessed Ovechkin’s enthusiasm wane, more than halfway to turning 37.

“He comes to the rink, works hard, wants to score as many goals as possible, Nothing changes with him.”

Ovechkin, with 41 goals in 52 games against Toronto, got an early start on hurting the Leafs. In his first two games against them in a back-to-back in early November of 2005, he started with two goals on Mikhael Tellqvist including the winner in a 5-4 win in D.C. There were two more goals in a 6-4 loss on Bay Street against Ed Belfour.

Matthews would have been eight years old at the time, well before he took up hockey, but he quickly warmed to imitating Ovechkin.

“I went yellow laces (on his skates) for a little bit. That was probably the main thing, and probably the tape job. Yellow laces have been a pretty big staple of his, so I remember doing that for a couple of years for sure.”

In a season where goaltending health and depth have become another huge question mark for the Leafs, they’re still on the verge of a unique team mark for netminding wins.

The last time five were employed in one year for Toronto was 1983-84, but all of Allan Bester, Mike Palmateer, Rick St. Croix, Ken Wregget and Bruce Dowie were at or below .500.

There were three Sept. 17 birthdays on the ice Thursday with Ovechkin, Matthews and Michael Bunting, and one behind the bench in Keefe … Not that he was in the running for the Lady Byng Trophy again this year after his two-game cross checking suspension last month, but Matthews is now at a single-season career high 16 penalty minutes … When Keefe felt Wilson went down too easily in a positional battle with Timothy Liljegren, he rushed through the tunnel past his players before the second period to press his point with referee Michael Markovic.