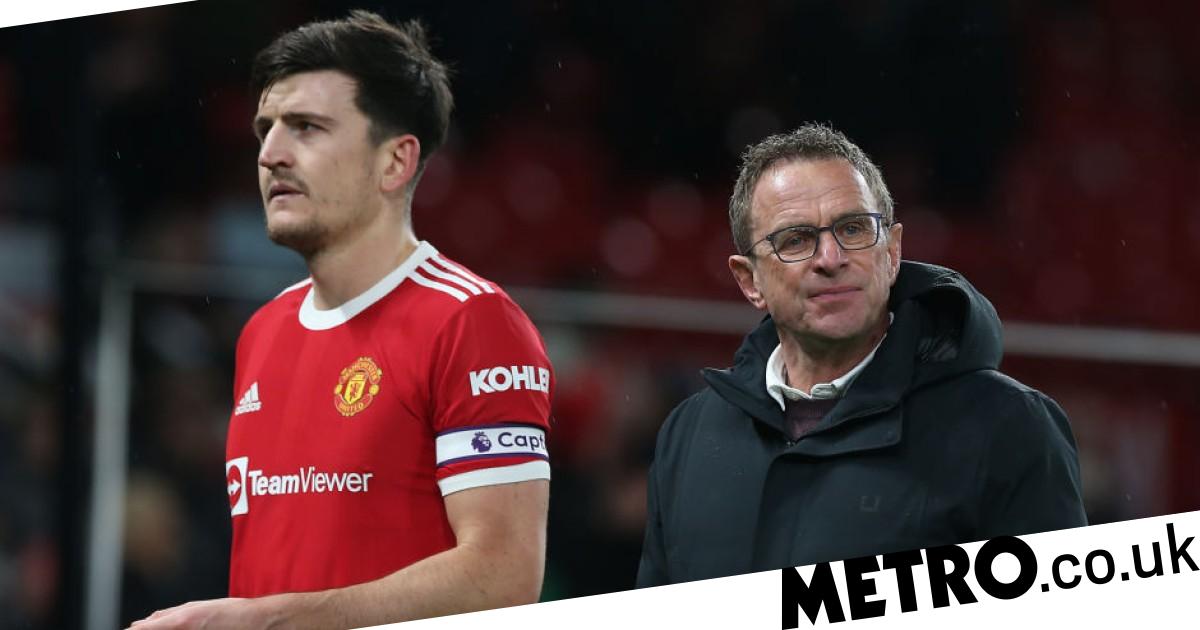 A growing number of Manchester United players are scratching their heads over Harry Maguire’s seemingly undroppable presence in the team this season.

Maguire has looked a shadow of his former self since returning from England’s Euro 2020 campaign last summer and the defender’s decline in form has only worsened as the season has progressed.

Metro.co.uk reported in November that Maguire was struggling to cope with the added burden of the captaincy, with the armband – previously worn by the likes of Roy Keane, Wayne Rooney and Bryan Robson – said to be ‘weighing heavily’ on the 28-year-old centre-half.

Ole Gunnar Solskjaer and, now, Ralf Rangnick have repeatedly jumped to Maguire’s defence through his troubles, but the England international has been on the receiving end of yet more criticism in recent weeks after a pair of sub-par performances versus Burnley and Southampton.

According to The Times, several United players have been privately ‘airing their grievances’ at the club’s Carrington training base, baffled by the centre-back’s continued selection in Rangnick’s starting XI.

Maguire has started more Premier League games (21) than Victor Lindelof (17) and Eric Bailly (3) combined this term and many feel the time has come for the ex-Leicester man to be taken out of the firing line.

Lindelof was one of the Red Devils’ few positives as he shone alongside Raphael Varane in a stalemate with Watford last Saturday and there are calls for the Swede to keep his place in the team for this weekend’s Manchester derby.

It remans to be seen which centre-back combination Rangnick will select at the Etihad, with the German insisting Maguire was simply rested versus the Hornets in the wake of the side’s draw with Atletico Madrid.

‘In my opinion, if Manchester United were to get somewhere near to their money back on Harry Maguire, I think they’ll have to think about it,’ Parker said.

‘I think with Lindelof and Varane, they could build something there maybe, in a mode of what they’re looking for and where the club wants to be.

‘You’re talking about players who are definitely more agile, a little bit quicker, better defenders in one against one situations and I think you have to look at it that way.

‘I don’t know if it’s going to happen. Me, personally, for United to go forward, that’s the starting area.

‘But again the same old scenario – you don’t want the manager coming in and all of a sudden, he comes in, he wants to do stuff and then he stops, the people above stop him from doing what he wants to do and then United go through the same stories.’