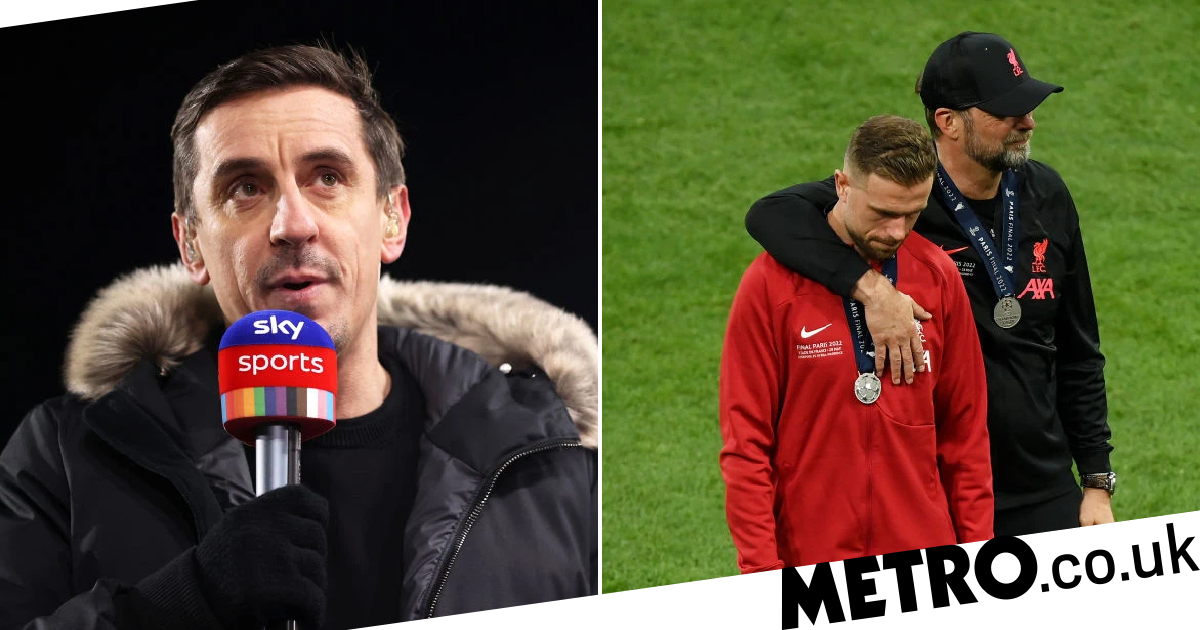 Liverpool created a number of chances as they chased a seventh Champions League crown and third trophy of the season, but Real Madrid goalkeeper Thibaut Courtois produced an inspired performance to deny Jurgen Klopp’s side.

The Reds threatened to secure a historic quadruple as the season drew to a close but Liverpool will have to settle with the FA Cup and EFL Cup after also falling short in the Premier League title race.

Neville admitted he was delighted Liverpool suffered disappointment on the final day of the Premier League season and was equally as happy after their Champions League final defeat.

Real Madrid boss Carlo Ancelotti hailed his side after they secured yet another Champions League title, to go with their La Liga win in Spain.

He said: ‘I can’t believe it. We had a fantastic season. We did really well.

‘It was a difficult game and we suffered a lot, more so in the first half. In the end I think we deserved to win this competition. We’re really happy. What can I say? I can’t say more.

‘I am a record man. I had luck to come here last year and have a fantastic season. A fantastic club, a really good squad with a lot of quality and mental character.

‘The season was top. I think we passed through really difficult games. The supporters helped us a lot in the last game. They helped us tonight. We’re happy and they’re happy.’

‘It has still been a great season for Liverpool, the whole ride,’ he said on BBC Radio 5 Live.

‘The FA Cup, the League Cup, yes they’ve missed out in the league to a brilliant Manchester City side and then tonight they are pipped at the post.

‘It will feel more sour because of the situation with their fans not getting into the stadium.’