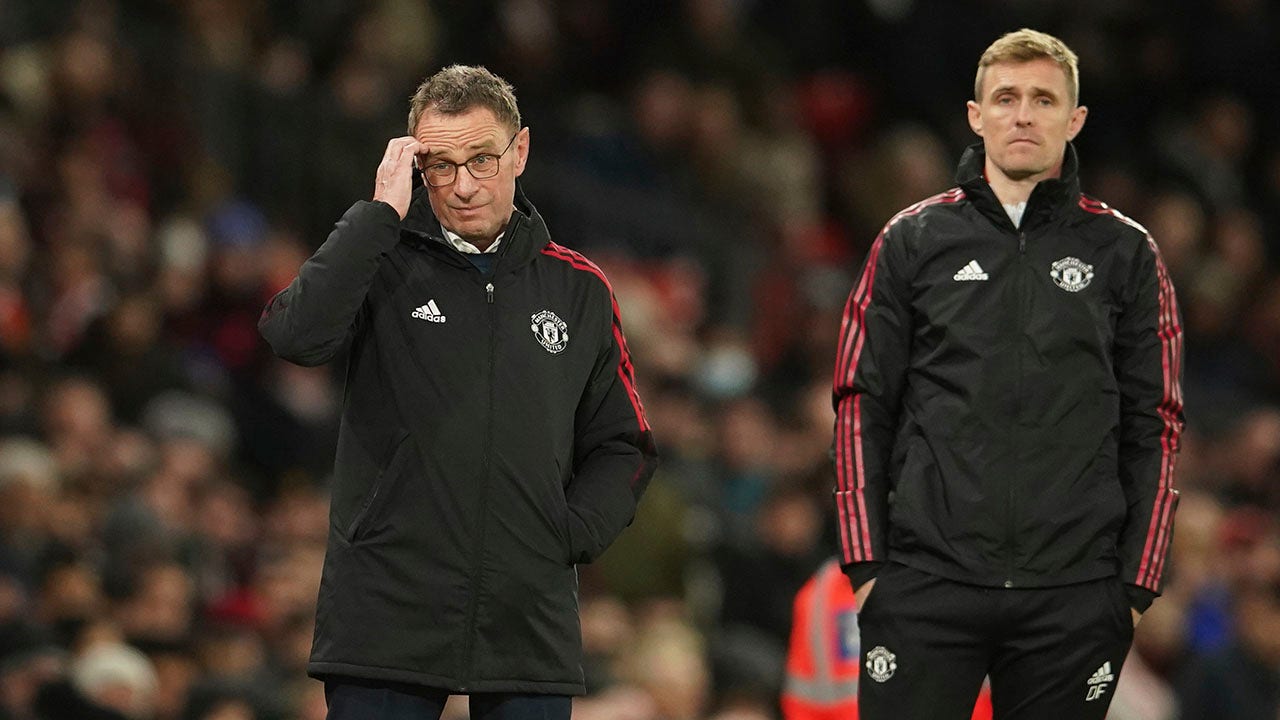 Ralf Rangnick is beginning to understand just how big a job he has taken on at Manchester United.

His players are already becoming dispirited, too.

Rangnick fell to his first loss as United manager after Joao Moutinho’s 82nd-minute strike earned Wolverhampton a 1-0 win in the English Premier League on Monday, and his team’s first victory at Old Trafford since 1980.

Outplayed for much of the game, United’s players looked like they would survive for a point until Moutinho met a defensive headed clearance by controlling the ball at the edge of the area and driving in a volley that rolled just inside the post.

This was the toughest test of Rangnick’s opening six matches in charge and United at times couldn’t get near Wolves, whose passing and movement was sharper in its first game in two weeks following COVID-19 issues in the squad. Wolves had 19 shots in total, with the 15 in the first half the most by a visiting team at Old Trafford since the league’s statistic supplier, Opta, began recording stats in 2003.

There were murmurings of discontent from the home fans, too, with some jeering Rangnick’s decision to substitute Mason Greenwood just before the hour.

“I didn’t feel when I was on the pitch that we were all there together,” said United left back Luke Shaw, who complained of a lack of options on the ball and aggression off it.

Shaw went on to paint a bleak picture of life in a squad that includes world-renowned players Cristiano Ronaldo, Marcus Rashford and Bruno Fernandes, the latter of whom started on the bench.

“You look at our team, the players we have, we have unbelievable quality,” Shaw said. “Sometimes quality isn’t enough. We need to bring the intensity, be more aggressive, and bring more motivation.

“Maybe from the outside it didn’t look like we had any of them three.”

United stayed in seventh place, 22 points off leader Manchester City and four off the top four after the most worrying display yet under Rangnick.

“We didn’t play well at all, individually or collectively,” said the German, adding: “The game showed we still have a lot of work to do.”

Rangnick has had a benign start on paper after arriving as a replacement for the fired Ole Gunnar Solskjaer, with three of his four previous league opponents being the bottom three of Norwich, Newcastle and Burnley. Wolves was the first team from the top half to play Rangnick’s United and there was a gulf in class and team shape.

United’s new coach was supposed to bring a better pressing game to the team, but that isn’t apparent yet.

“We didn’t press at all,” Rangnick said. “We weren’t able to get in pressing situations … this is the big issue.”

A positive for United was a first start in nearly two years in all competitions for Phil Jones, a former England center back who has struggled with a longstanding right knee injury. He was given a rousing ovation when he made his first clearance and he barely put a foot wrong.

Jones couldn’t mark his return with a clean sheet, though, and it was his clearance that was pounced on by Moutinho for the goal, which made him the oldest visiting player at 35 to score a winner in the Premier League at Old Trafford.

Wolves goalkeeper Jose Sa preserved his shutout with a diving save to his right to keep out Bruno Fernandes’ free kick with one of the last acts of the game.

Fernandes had been the player to come on for Greenwood and, within minutes, struck the crossbar with United’s best chance. Cristiano Ronaldo, making his 1,100th senior career appearance, also had a goal for United disallowed for offside.

“We have time to refocus back,” Shaw said, referring to the gap to United’s next game — at home to Aston Villa in the FA Cup next Monday. “We’ve got a long training week. And maybe the manager can bring some more ideas that he wants on the pitch.”