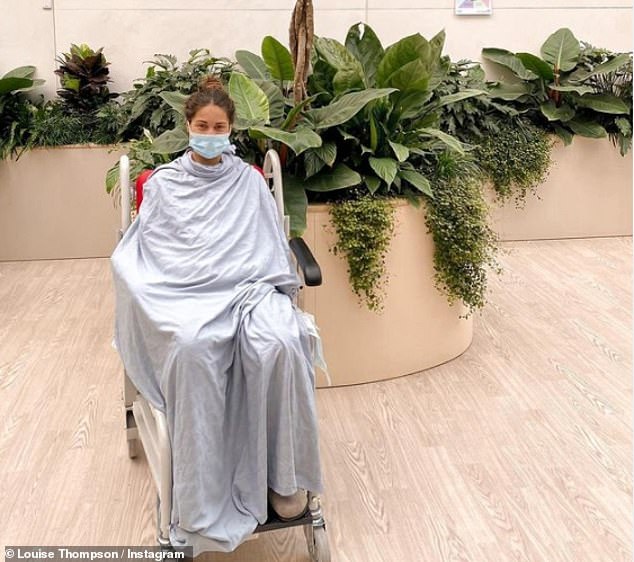 Louise Thompson has praised the National Health Service after spending almost five weeks in hospital following the birth of her first child, but admits her Christmas was ruined after two family members tested positive for COVID-19.

The former Made In Chelsea star, 31, confirmed the birth of son Leo-Hunter with fiancé Ryan Libbey on Thursday after suffering ‘serious complications’ while in labour that left her in intensive care.

Taking to Instagram on Tuesday, Louise shared a photo of herself wearing a protective face-mask while confined to a wheelchair and admitted the ongoing pandemic had made her more appreciative of frontline NHS staff.

Grateful: Louise Thompson praised the National Health Service in an Instagram post on Tuesday after spending almost five weeks in hospital following the birth of her first child

Captioning the photo, she also revealed plans to spend her first Christmas as a mother with loved ones were scuppered after two family members tested positive for COVID.

She explained: ‘We all did Covid tests ahead of Christmas Day because a few of our family members are particularly vulnerable (myself included) and it turns out that two people were positive so our plans have been scuppered.

‘It certainly wasn’t the Christmas that we had planned, but then again neither were the last three and I’m still feeling overwhelmingly blessed to be at home and in my little bubble. 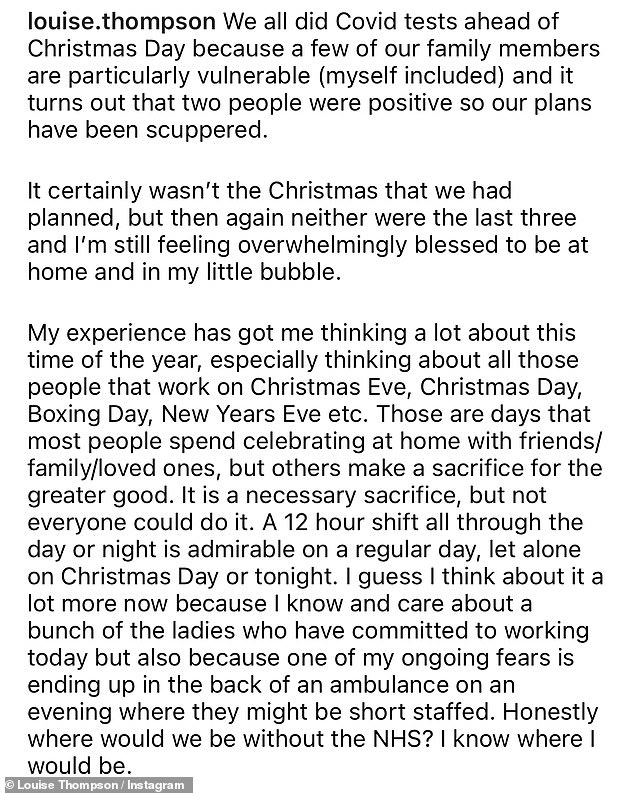 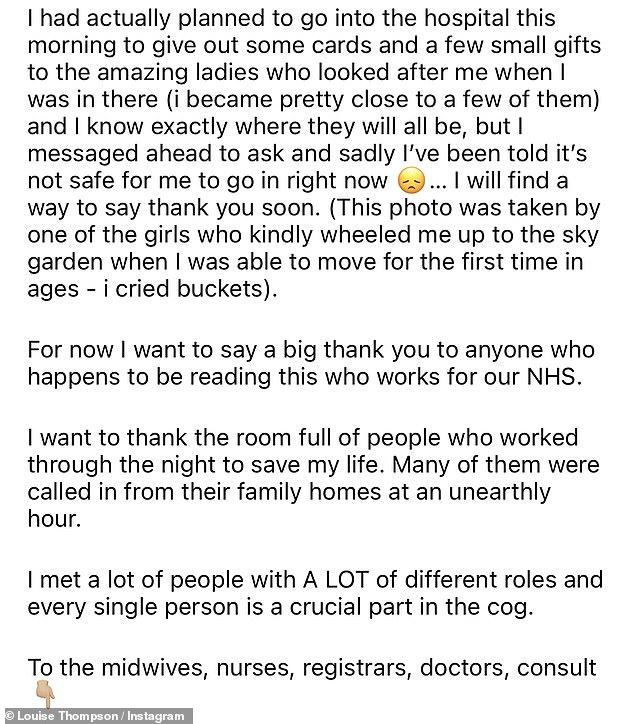 Thank you:  The TV personality admitted she wanted to thank the NHS staff who cared for her in person, but was prevented from doing so because of ongoing COVID restrictions

‘My experience has got me thinking a lot about this time of the year, especially thinking about all those people that work on Christmas Eve, Christmas Day, Boxing Day, New Years Eve etc. Those are days that most people spend celebrating at home with friends/family/loved ones, but others make a sacrifice for the greater good.’

She added: ‘It is a necessary sacrifice, but not everyone could do it. A 12 hour shift all through the day or night is admirable on a regular day, let alone on Christmas Day or tonight.

‘I guess I think about it a lot more now because I know and care about a bunch of the ladies who have committed to working today but also because one of my ongoing fears is ending up in the back of an ambulance on an evening where they might be short staffed. Honestly where would we be without the NHS? I know where I would be.’ 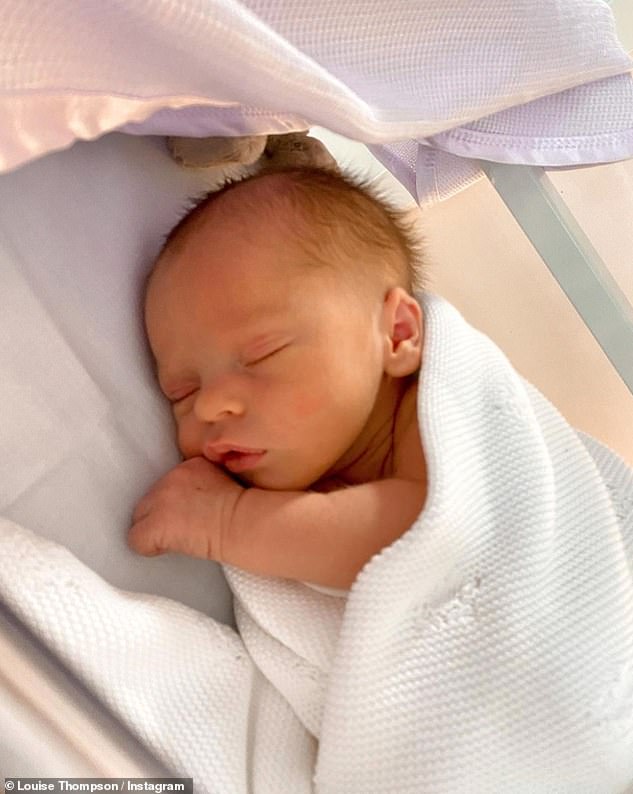 Revealing the intention to meet her nurses in person, she wrote: ‘I had actually planned to go into the hospital this morning to give out some cards and a few small gifts to the amazing ladies who looked after me when I was in there (i became pretty close to a few of them) and I know exactly where they will all be, but I messaged ahead to ask and sadly I’ve been told it’s not safe for me to go in right now.

‘I will find a way to say thank you soon. (This photo was taken by one of the girls who kindly wheeled me up to the sky garden when I was able to move for the first time in ages – i cried buckets).

‘For now I want to say a big thank you to anyone who happens to be reading this who works for our NHS.

‘I want to thank the room full of people who worked through the night to save my life. Many of them were called in from their family homes at an unearthly hour.

‘I met a lot of people with A LOT of different roles and every single person is a crucial part in the cog.’ 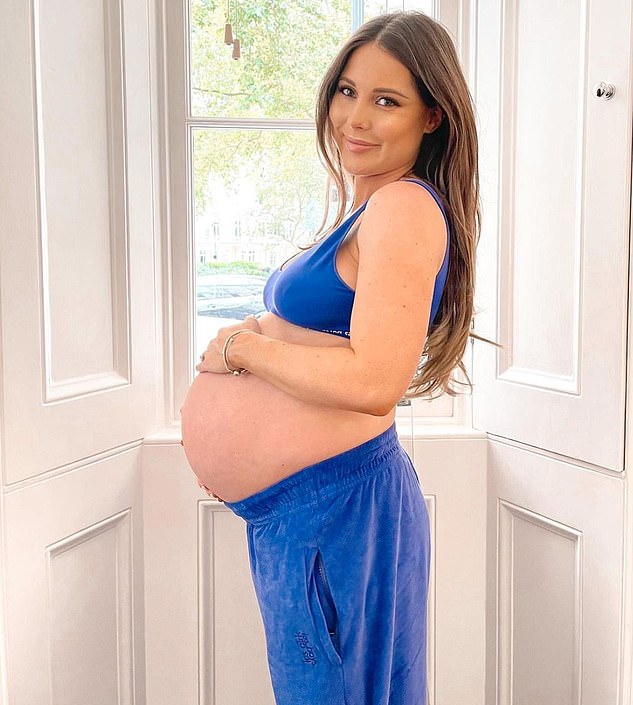 Mama: The former Made In Chelsea star previously told how she ‘suffered serious complications’ that left her intensive care 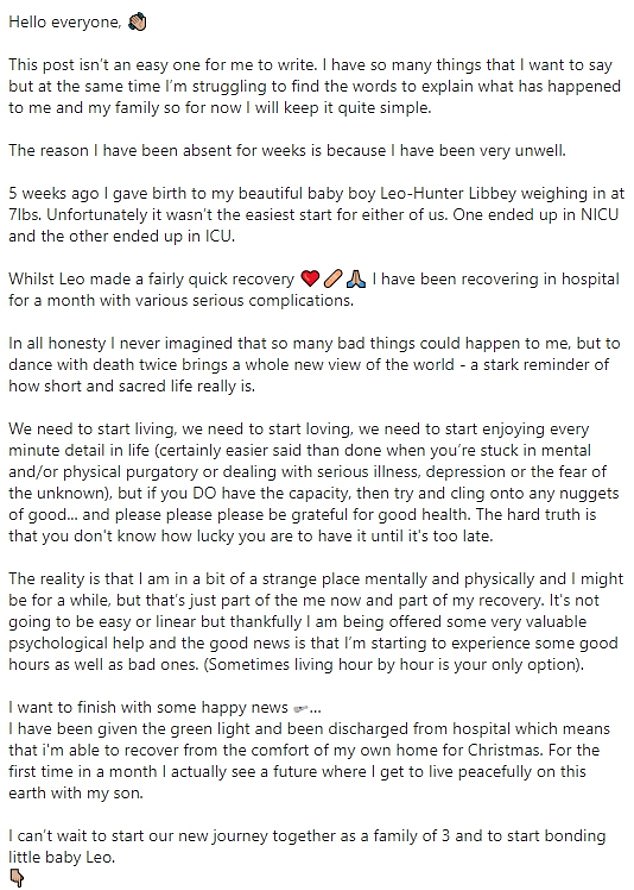 Speaking out: She shared a lengthy explanation for her absence as she thanked her fans for all their support and well wishes

Louise previously  shared the first picture of her adorable son on her page and admitted ‘it wasn’t easy’ to explain what has happened to her in recent weeks.

The reality star had announced that she was taking a break from social media on November 14, ahead of the birth, but had since been silent on Instagram up until now.

She wrote: ‘Hello everyone, this post isn’t an easy one for me to write. I have so many things that I want to say but at the same time I’m struggling to find the words to explain what has happened to me and my family so for now I will keep it quite simple.

‘5 weeks ago I gave birth to my beautiful baby boy Leo-Hunter Libbey weighing in at 7lbs. Unfortunately it wasn’t the easiest start for either of us. One ended up in NICU and the other ended up in ICU.

Reassuring her followers that Leo was not unwell for long, Louise said: ‘Whilst Leo made a fairly quick recovery. I have been recovering in hospital for a month with various serious complications.’ 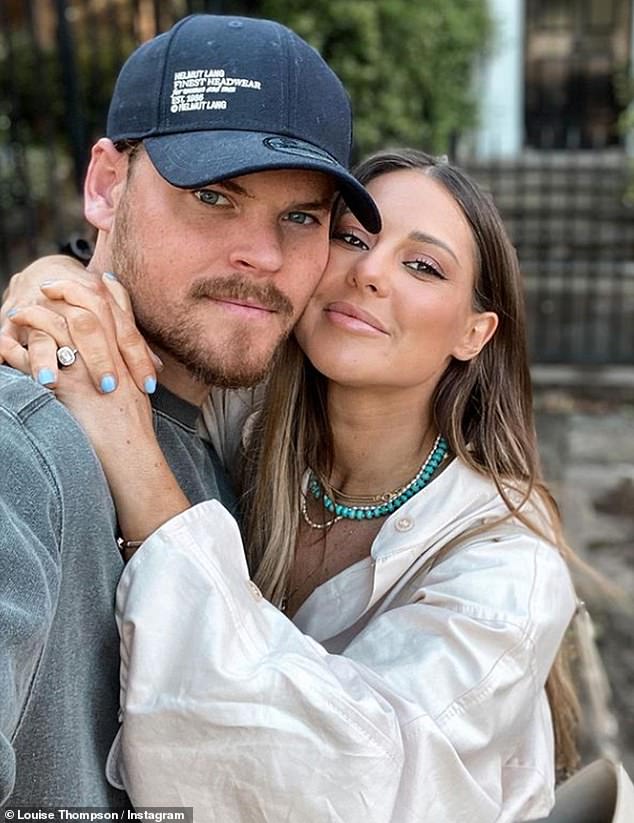 Causing concern: Fans of Louise and Ryan had been expressing their concern after the normally social media savvy pair took a break from posting

Louise, who was recently involved in a house fire at her mother’s house which meant she had nowhere to live while heavily pregnant, said that the two incidents have meant she how has a new outlook on life.

‘In all honesty I never imagined that so many bad things could happen to me, but to dance with death twice brings a whole new view of the world – a stark reminder of how short and sacred life really is. 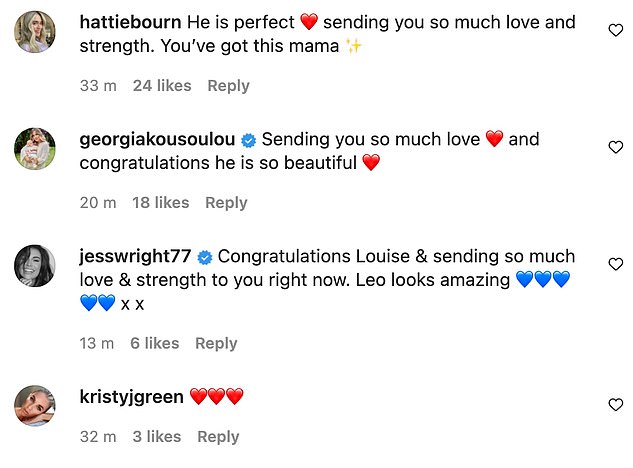 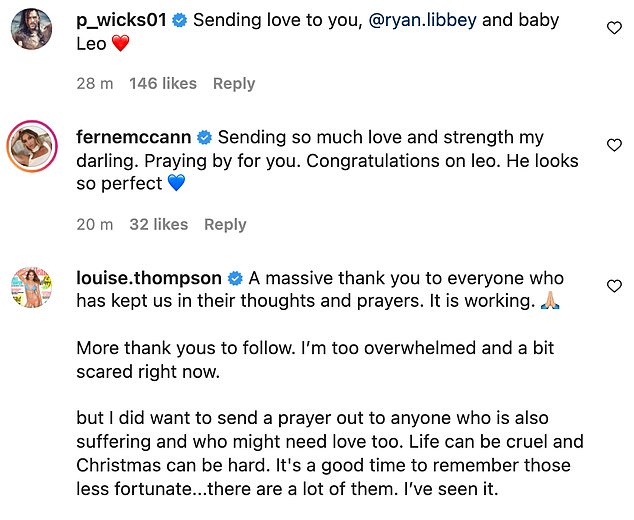 Reaction: Louise and Ryan received an influx of support from their friends and followers in the comments section of the post after sharing the news

Going on to reveal she is seeking psychological support following the trauma, Louise said: ‘The reality is that I am in a bit of a strange place mentally and physically and I might be for a while, but that’s just part of the me now and part of my recovery.

‘It’s not going to be easy or linear but thankfully I am being offered some very valuable psychological help and the good news is that I’m starting to experience some good hours as well as bad ones. (Sometimes living hour by hour is your only option).’

She added: ‘I want to finish with some happy news… ‘I have been given the green light and been discharged from hospital which means that i’m able to recover from the comfort of my own home for Christmas. For the first time in a month I actually see a future where I get to live peacefully on this earth with my son. 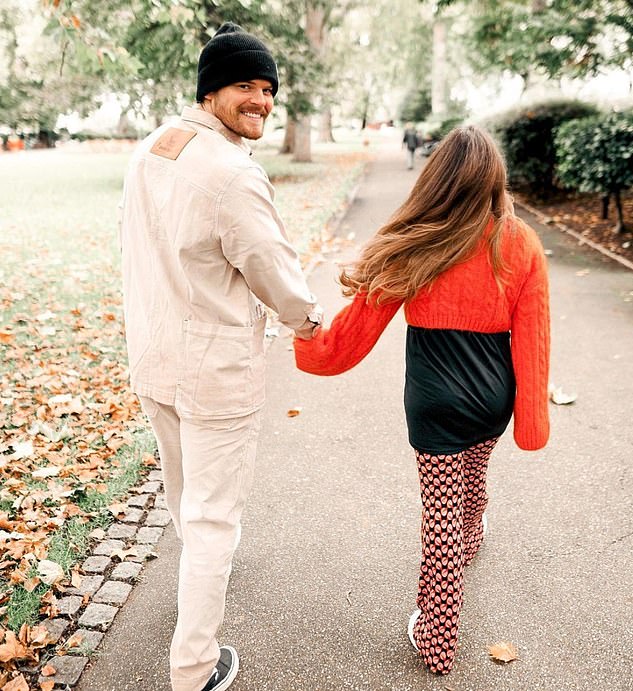 Pictured: Louise announced that she was taking a break from social media ahead of the birth on November 14, but had since been silent on Instagram up until now

‘I can’t wait to start our new journey together as a family of 3 and to start bonding little baby Leo.

‘A massive thank you to everyone who has kept us in their thoughts and prayers. It is working.  More thank yous to follow. I’m too overwhelmed and a bit scared right now.

‘But I did want to send a prayer out to anyone who is also suffering and who might need love too. Life can be cruel and Christmas can be hard. It’s a good time to remember those less fortunate…there are a lot of them. I’ve seen it.’

Louise’s partner Ryan, 31, has yet to announce the birth of their little boy on his Instagram, however he has since updated his bio to read: ‘daddy’. 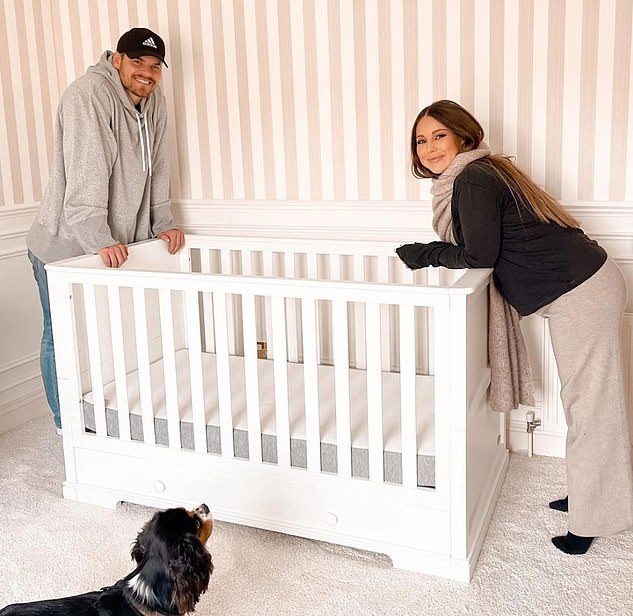 Journey: Louise shared regular pregnancy updates on Instagram ahead of the birth

It hasn’t been an easy few months for the media personality, who revealed she had ‘basically lived out of a car’ since being involved in the devastating house fire.

In October, a heavily pregnant Louise admitted she had been experiencing ‘a bit of social anxiety’, and detailed how tough things have been since the crisis, which also concerned her mum, her fiancé and their dogs.

She wrote: ‘fire officers, nhs staff, neighbours, family members, old friends, new friends, instagram friends who I hardly know, my wonderful agency, brands I work with, the lady working behind the counter in the shop, my business partners, work colleagues, fitness clients, the lady in the park this morning, strangers on the street…

‘Thank you for your incredible support.’ 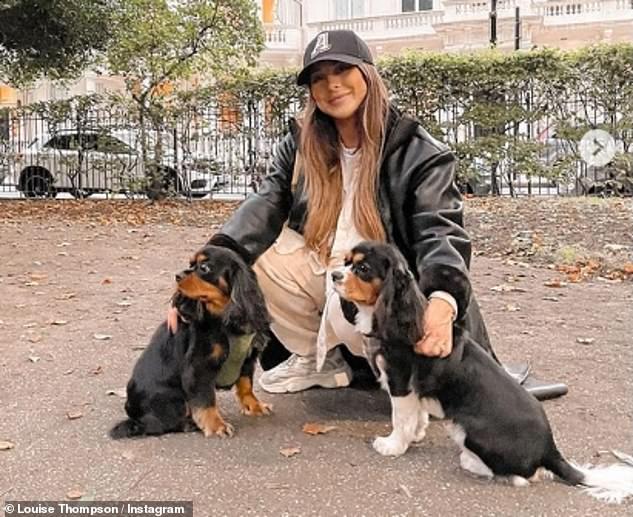 Ordeal: In October, Louise admitted she had been experiencing ‘a bit of social anxiety’ and had been ‘living out of a car’ following a fire at her family home

She added: ‘I have to say I am totally overwhelmed by the kindness and generosity that people offer up when trying to help someone get through a crisis.

‘I have had messages from people that I’ve met ONCE offer up their best friends, cousins, dogs, ex girlfriends, dads house in order to try to help. It means a lot – I feel incredibly lucky and I wish everyone could be this lucky.’

Louise was staying with her mother Karen at the time of the fire, while renovations were done on her South West London home. 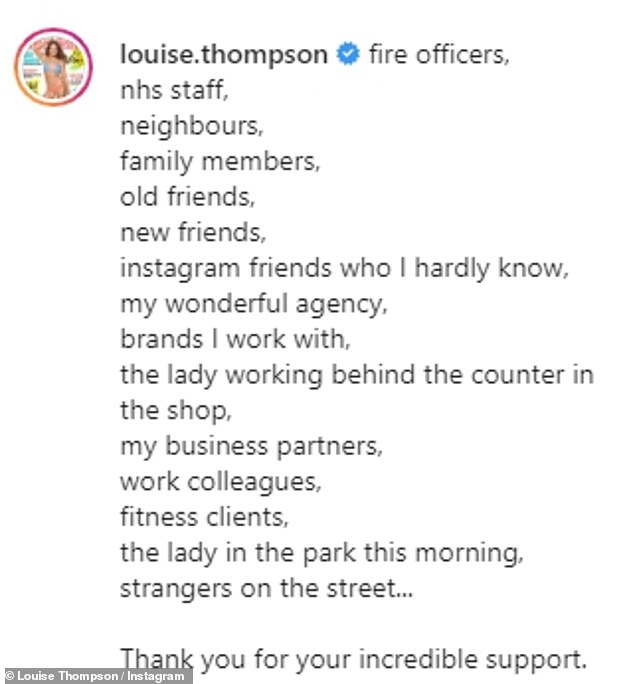 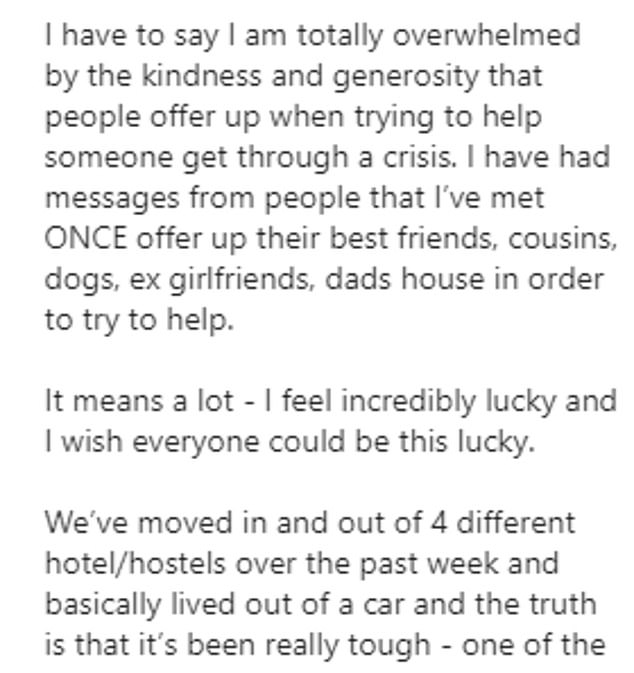 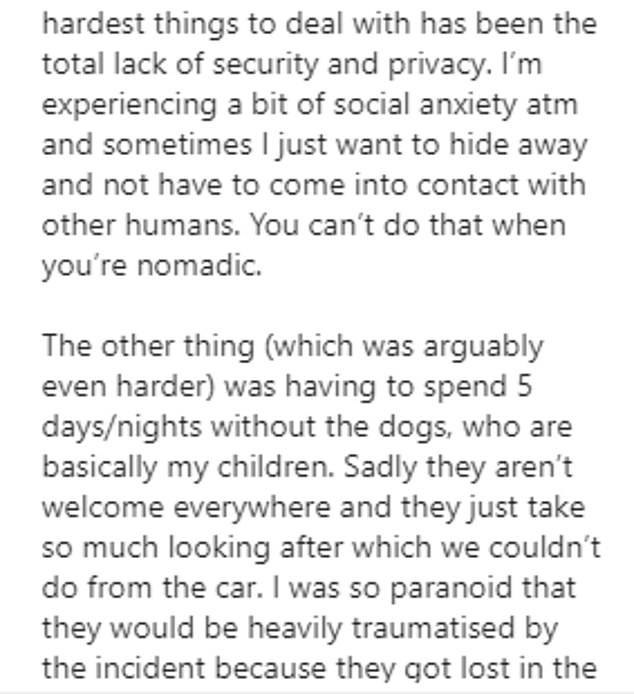 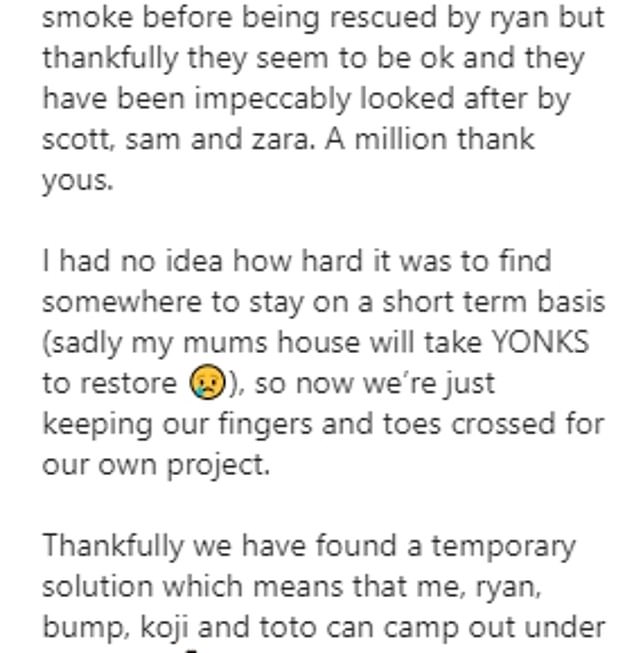 Update: ‘I have to say I am totally overwhelmed by the kindness and generosity that people offer up when trying to help someone get through a crisis’ Louise told Instagram followers

Of her current living situation, she said: ‘We’ve moved in and out of 4 different hotel/hostels over the past week and basically lived out of a car and the truth is that it’s been really tough – one of the hardest things to deal with has been the total lack of security and privacy.

‘I’m experiencing a bit of social anxiety atm and sometimes I just want to hide away and not have to come into contact with other humans. You can’t do that when you’re nomadic.’

Louise is no stranger to showcasing her love for her pets and also gave fans an update on how they’re doing.

She added: ‘The other thing (which was arguably even harder) was having to spend 5 days/nights without the dogs, who are basically my children. Sadly they aren’t welcome everywhere and they just take so much looking after which we couldn’t do from the car. 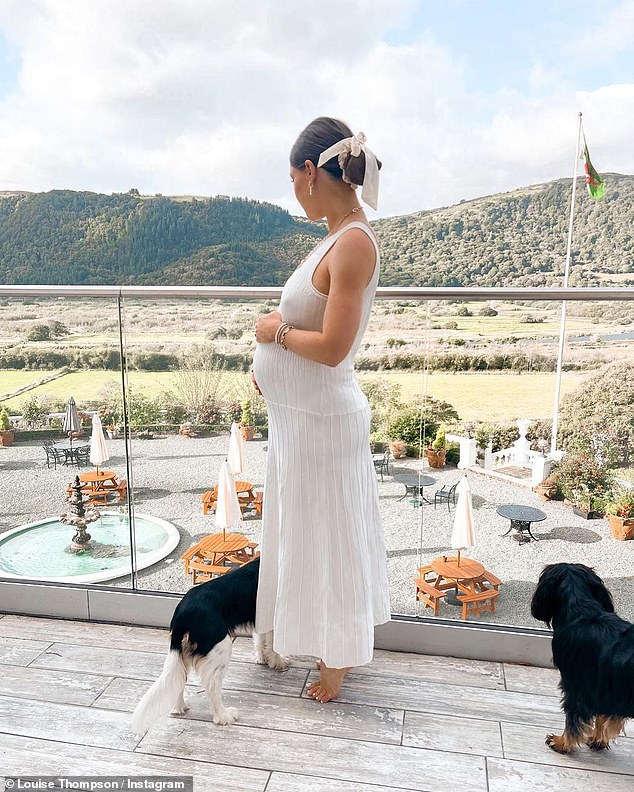 Scary: Louise is no stranger to showcasing her love for of dogs and features them regularly on her Instagram account

‘I was so paranoid that they would be heavily traumatised by the incident because they got lost in the smoke before being rescued by ryan but thankfully they seem to be ok and they have been impeccably looked after by scott, sam and zara. A million thank yous,’ she remarked.

Remaining optimistic, Louise said: ‘I had no idea how hard it was to find somewhere to stay on a short term basis (sadly my mums house will take YONKS to restore), so now we’re just keeping our fingers and toes crossed for our own project.

‘Thankfully we have found a temporary solution which means that me, ryan, bump, koji and toto can camp out under one roof [sic] hopefully until the baby is born if needs be.’