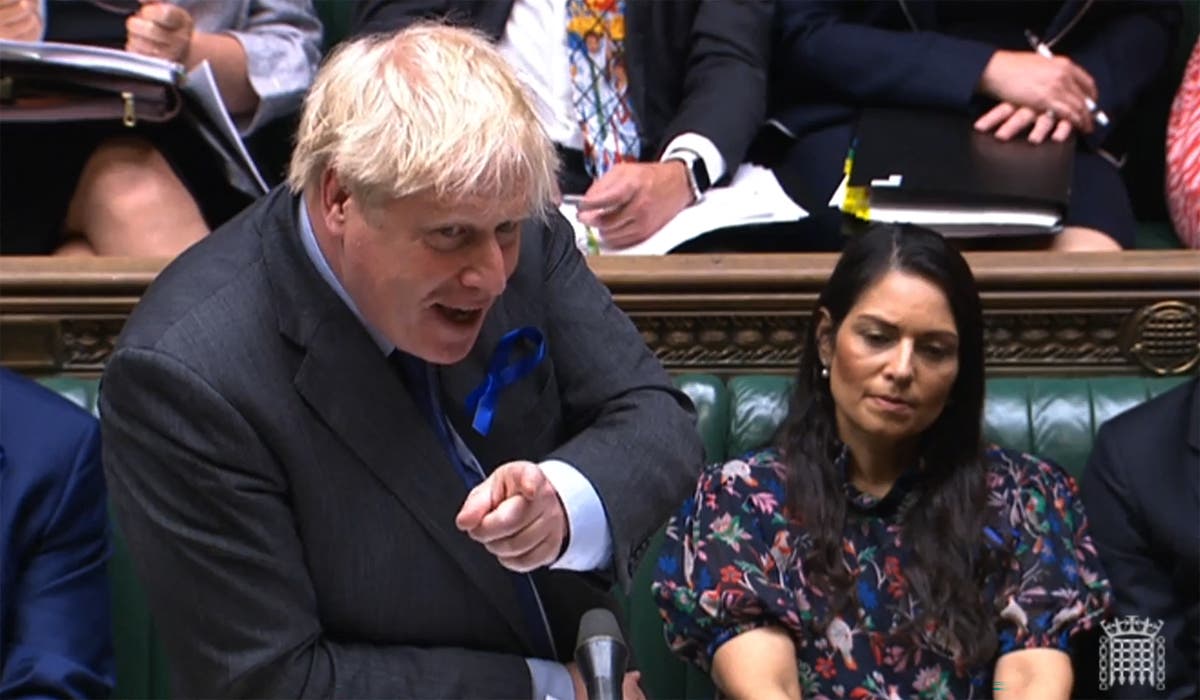 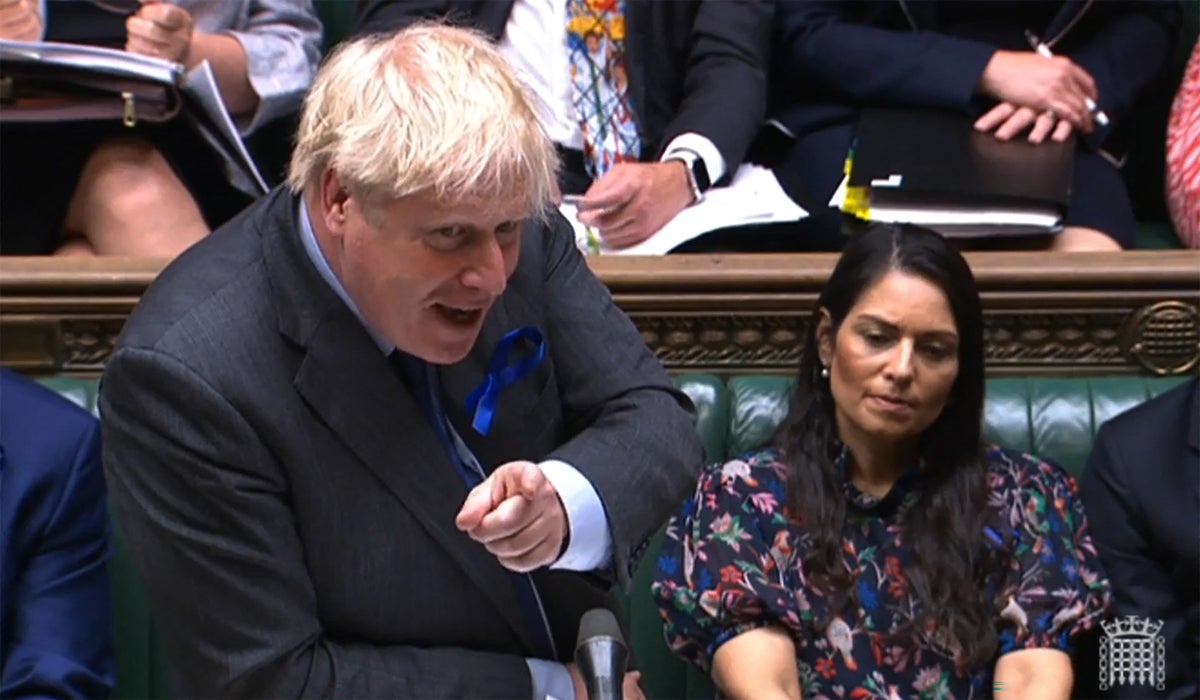 Good morning, this is the Standard’s politics live blog where we will be bringing you the latest updates from the heart of Westminster.

In just over half an hour’s time, Boris Johnson will take on questions from Keir Starmer and MPs in PMQs.

On the agenda is likely to be the national rail strikes, which have caused travel misery for millions of people.

Also likely to come up is tomorrow’s by-elections in Tiverton and Honiton and Wakefield.

It began with Mr Johnson talking about the new Windrush Day national monument at Waterloo station. He also thanked the Armed Forces for their services to the country, as well as welcomed a deal with Moderna.

Mr Johnson said he would travel to Rwanda to the Commonwealth Heads of government summit later.

He was also challenged about allegations he tried to get his now wife Carrie Symonds, a job in government while he was foreign secretary.

Labour MP Chris Elmore (Ogmore) asked: “Has he ever considered the appointment of his current spouse to a Government post or to any organisation in one of the royal households?

“Be honest Prime Minister: yes or no?”

Mr Johnson replied: “I know why the party opposite wants to talk about non-existent jobs in the media because they don’t want to talk about what’s going on in the real world.”

Mr Johnson has denied the claims.

PM and Starmer clash over rail strikes and by-elections

He said: “In particular, the plucky Conservative candidate for Wakefield, he is standing even though his own colleagues think he is so useless they held a vote of no confidence in him.”

As Tory MPs looked on puzzled, Sir Keir added: “Does the Prime Minister hold any personal interest in seeing if the public will vote for a Tory that even his own side don’t think is up to it?”

Mr Johnson replied: “I have absolutely no doubt that the people of this country and the people of Wakefield, and the people of Tiverton and Honiton would much rather vote for a solid Conservative Government than for a Labour Party, their enablers and acolytes in the Liberal Democrats, the karma chameleons of British politics.”

The Prime Minister added that Sir Keir “hasn’t even got the gumption to speak out against the rail strikes”.

Some MPs are wearing blue ribbons in the Commons on Wednesday to mark an anti-bullying initiative.

“It’s part of an anti-bullying initiative. Don’t face it alone”.

Keir Starmer: PM has not ‘lifted a finger to stop these strikes’

Labour leader Sir Keir Starmer said: “The Prime Minister of this country and his Transport Secretary haven’t attended a single meeting, held a conversation or lifted a finger to stop these strikes.

“But I did note that on Monday they did find time to go to a lavish ball where the Prime Minister sold a meeting with himself for £120,000… If there’s money coming his way, he’s there.

“So rather than blame everyone else why doesn’t he do his job, get round the table and get the trains running?”

Boris Johnson replied: “We are making sure that we do everything we can to prevent these strikes. He knows it is up to the railway companies to negotiate, that is their job. We’ve spent £16 billion looking after the railways throughout the pandemic, that’s cost every household £600.

He added: “We know why he won’t condemn the strikes, we know why even now he hasn’t got the gumption to call out his MPs for going out to support the pickets. The reason his authority is on the line in this matter is that they take £10 million… that’s the fee the learned gentleman opposite is receiving for the case he is failing to make.”

There were roars from the Conservative benches as Sir Keir Starmer said “now we have got the biggest rail strikes in 30 years”.

Sir Keir asked: “If he is genuine about preventing strikes, will the Prime Minister tell this House how many meetings he or his Transport Secretary have had with rail workers this week to actually stop a strike?”

The Prime Minister replied: “This is the Government that loves the railways, that invests in the railways, £96 billion we are putting into the integrated railway plan.”

Boris Johnson also claimed that 25 Labour MPs out on the picket line were “defying instruction” from Sir Keir, and suggested Labour was backing strikers not “strivers”.

SNP Westminster leader Ian Blackford asked the Prime Minister if his Government “bears any blame” for the fact that the United Kingdom is doing “much worse than our European neighbours”.

Mr Blackford told the Commons UK inflation is now at a “40-year high”, adding: “After 12 years in Government, the Tories have left the UK economy in the doldrums and pushed millions of people into poverty.

“So, can I ask the Prime Minister, does he think his Government bears any blame for the fact that the United Kingdom is doing so much worse than our European neighbours?”

Boris Johnson replied: “Actually, I think the whole House knows, and the whole country knows we have got a global inflationary problem, but this Government has the fiscal firepower to deal with it.

“And that is, I think, a benefit to the whole of the United Kingdom, including Scotland as we’ve seen throughout the pandemic, and I think it’s a matter of fact that taxes are actually highest of all in Scotland.”

Keir Starmer: ‘Get on with your job’

Labour leader Sir Keir Starmer said: “There’s a huge problem facing the country and all he’s interested in doing is blaming everyone else. Can’t he hear the country screaming at him, get on with your job? Whilst he blames everyone and anyone, working people are paying the price.”

Boris Johnson replied: “Under this Government five million public sector workers are getting a pay rise, we’ve increased the Living Wage by £1,000, we’ve increased Universal Credit so that people get £1,000 more.

“Thanks to the fiscal fire power that we have, we’re putting £1,200 more into every one of the eight million most vulnerable households in the country, that is what we can do because of the tough decisions that we have taken.